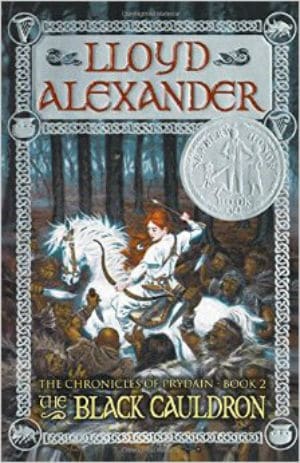 The Black Cauldron is the second book in The Prydain Chronicles by Lloyd Alexander. The series is made up of five books published between 1964 and 1968, and a collection of short stories (The Foundling and Other Tales) published in 1973. These books are The Book of Three, The Black Cauldron, The Castle of Llyr. Taran Wanderer, and The High King.

RELATED Vintage YA Book Review: The Book of Three

When I first picked up The Black Cauldron, I was really confused. I had recently discovered the world of fantasy literature and was also very excited about learning that a Disney movie I adored, The Black Cauldron, was based on not one book, but a series of books. Excited, I grabbed the title I recognized, The Black Cauldron, and started to read, only to realize that I had no idea what was going on. Quickly, I re-shelved it and grabbed The Book of Three instead.

While The Black Cauldron can, in fact, stand on its own as a story, it makes much more sense if you read it as book two in a series, as it builds on the characters, geography of Prydain, and the relationships that were built and fleshed out in The Book of Three. Building on the foundation so well laid-out in Book One, The Black Cauldron is a masterful weaving of fantastic plot, great adventure, compelling characters, and gives you numerous reasons to cry, in both sadness and rage. It was also a Newbery Honor book in 1966.

The Black Cauldron follows the further adventures of Taran, Assistant Pig-Keeper at Caer Dallben, and his friends. In this story, the brave Prince Gwydion has decided that for too long has the realm been plagued by the Cauldron-born, an army of the undead that serves the evil lord of Annuvin, Arawn.

To even the playing field, he leads an army of brave warriors to steal the cauldron from Arawn. When they arrive, they find that it has already been stolen, and things are thrown into chaos. When Taran and the rest of the rear-guard learn, through a series of accidents, where the cauldron is, they set out for the Marshes of Morva. Here, they plan to bargain with Orddu, Orwen, and Orgoch for the Black Cauldron, and hopefully, destroy it.

Because of his conflicts with the headstrong and proud Prince Ellidyr, his friendship with the bard-prince Adaon, and advice from the always vocal and often correct Princess Eilonwy, Taran continues along the path to adulthood, learning along the way about sacrifice, the cost of glory, betrayal, and what it means to be a true leader. Growing up has a cost, and as the book continues, Taran learns more about kind of man he wants to be.

The lyrical style of the writing sweeps you away, and you feel as though you are there, watching Taran and Company carry the Cauldron through the forest and running from the forces of evil.

The world in The Prydain Chronicles continues to be fleshed out in The Black Cauldron, with Alexander painting a vivid picture of this world that is inspired, in part, by Wales. The lyrical style of the writing sweeps you away, and you feel as though you are there, watching Taran and Company carry the Cauldron through the forest and running from the forces of evil. It’s a shorter book, which is good because I could not put it down.

New faces, including Prince Ellidyr, Adaon, Gwystyl who mans the Fair Folk’s lookout post, and the warlords Smoit and Morgant all add a new layer to the story. They also gave a glimpse into the political structure of Prydain, which I personally find fascinating. These characters all fit seamlessly into the existing tale.

It’s interesting to me that, as Taran gets older, his adventures start to spread out a bit more. As Taran sees more of Prydain, so do we. As Taran learns more about the world around him and wrestles with his role, so do we. The reader follows Taran through his adventures in a coming of age saga I personally found to be wonderfully paced. It’s just the right blend of enough information and leaving the reader wanting more.

The returning supporting characters are also wonderful, providing a sense of balance to Taran and counterbalancing the arguments that he and Eilonwy seem to always be having. As you read about these characters, you can see them as real people; this is a group that would hang out together. The conflicts are real, and the characters and their struggles seem real too.

After reading The Book of Three, it’s easy to see why they all trust each other so much and can move in a cohesive group, trusting Taran to make decisions for them. They’re growing together, and it’s neat to see. Even without the background from The Book of Three, you can tell that these people have been through a lot together, just by reading about their interactions.

Overall, it’s a very satisfying second book in a wonderful series and one that, like I said, is almost impossible to put down. If you like coming of age stories with a dash of humor and a hearty helping of fantasy, The Black Cauldron may be perfect for you! The Prydain Chronicles, (or, as I sometimes think of it – The Adventures of An Assistant Pig-Keeper and His Friends, Including a Stubborn Princess, as They Defend Their Land From Evil, will continue in the next three books, where, hopefully, the story will continue to build on the excellent foundation that’s been laid here (I think it does, because The Castle of Llyr is my favorite in the series, but we’ll come back to that next time).

I said this when I talked about The Book of Three, and I’ll say it again here. I really love the Disney animated film The Black Cauldron. Honest. But, again, here’s the thing. It’s not a very good adaptation of the series and is therefore very high on my list of films I would love to see adapted properly. I still think a series of movies would work well, and making each book a film would allow for a budget that would let the filmmakers use the special effects necessary to tell the story.

For casting, I’m now picturing Taran as Thomas Brodie-Sangster, with Eilonwy as Sophie Turner. Dallben, I’m now picturing more as Michael Caine. Additional characters I imagine as follows: Tom Hiddleston as Adaon, Freddie Highmore as Prince Ellidyr, Sean Bean as Smoit, and Karl Urban as Morgant. I also imagine Ordu, Orwen, and Orgoch voiced by Judi Dench, Maggie Smith, and Betty White (I can’t explain it, I just think it would be hilarious). And, of course, Gurgi should still be voiced by Matthew Perry.

We’ve still got three books, so if you have any ideas, let me know in the comments. I’m going to keep thinking, because Gwydion, Fflewddur, Doli and Coll are proving to be very difficult to cast for me. Gwydion in particular is bothering me; I’m wondering if Richard Madden or Ben Barnes would work. What do you think?

Who would you cast? Have you read The Black Cauldron? Let me know what you think in the comments!

Our romance-themed entertainment site is on a mission to help you find the best period dramas, romance movies, TV shows, and books. Other topics include Jane Austen, Classic Hollywood, TV Couples, Fairy Tales, Romantic Living, Romanticism, and more. We’re damsels not in distress fighting for the all-new optimistic Romantic Revolution. Join us and subscribe. For more information, see our About, Old-Fashioned Romance 101, Modern Romanticism 101, and Romantic Living 101.
Pin this article to read later! And make sure to follow us on Pinterest.
By Bailey Cavender on April 18th, 2016