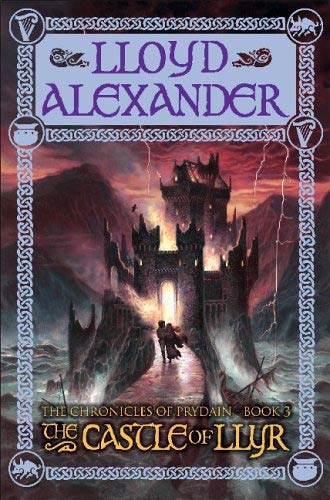 THE CASTLE OF LLYR BOOK REVIEW

The Castle of Llyr is the third book in The Prydain Chronicles by Lloyd Alexander. The series is made up of five books published between 1964 and 1968, and a collection of short stories (The Foundling and Other Tales) published in 1973. These books are The Book of Three, The Black Cauldron, The Castle of Llyr, Taran Wanderer, and The High King.

Sometimes, the third book in a series of five can be a little underwhelming. This is something that just happens; you know, that one book that we like in a series we love, but that still feels like we have to slog through it? It happens in the best of series, and I think of it as “The Two Towers Effect;” the story is wonderful, but there’s a lot that has to happen between the world-building first book (or two) and the conclusion of the last book (or two).

This book three, The Castle of Llyr, does not fall into that category. It takes the story that we know from the first two books and continues to build the world in a new way, taking us in a slightly different direction. Also, our two leads are growing up, so the story is changing in how they react to the world.  Honestly, it might be my favorite book of the series.

RELATED: VINTAGE YA BOOK REVIEW: THE BOOK OF THREE

In this installment of The Adventures of An Assistant Pig-Keeper and His Friends, Including a Stubborn Princess, as They Defend Their Land From Evil, the Princess Eilonwy is sent to the island of Mona to learn how to be a lady, much to her chagrin and Taran’s sadness.

There are also those who wish to use Eilonwy’s heritage for their own purposes. Old enemies and familiar friends appear as well.

Eilonwy’s journey of self-discovery takes the back-burner for a large chunk of the story, as Taran really is the hero of the series, but the characterization she does get is poignant. She learns about sacrifice, the kind of woman she wants to be, and what it means to grow up.

Meanwhile, Taran is learning more and more about how to be an effective leader, even when he is placed in charge of people that he doesn’t like. He also starts to realize that he may or may not feel something for a certain red-headed princess beside annoyance.

As an Assistant Pig-Keeper, he is also a little bitter over the fact that Princesses and Assistant Pig-Keepers typically don’t get married. Princesses marry princes. The struggle that Taran feels over this situation continues on in the next book, Taran Wanderer, but the setup here is great, giving some hints about her own feelings toward Taran. Even though the interactions are from his point of view and can seem a little sparse in this particular book, their interactions are always fun to read.

Unlike The Book of Three and The Black Cauldron, The Castle of Llyr doesn’t stand on its own as a story quite as well. You could catch up, but for the first third of the book, you might be a little confused. Plus, you could miss the incredible way that the Alexander has built these characters over the first two books, and the relationships aren’t given as much back story as they were in The Black Cauldron. The relationship between Taran and Eilonwy, in particular, is very well established by the time this book comes out.

One thing that I enjoyed about The Prydain Chronicles as a kid was the fact that the Princess Eilonwy was such a strong character. She was smart and sassy and wasn’t afraid to tell the people around her how she felt. Her heritage was always a bit of a mystery, though. Why was she left with Achren in Spiral Castle? What on earth is her bauble, and why does it glow? What happened to Achren, anyway? These questions and more are answered in The Castle of Llyr.

Like the other books in the series, The Castle of Llyr is a beautifully written book, using enough descriptive language to paint a beautiful picture, but leaving enough out so that readers can fill in the blanks. The tone seems otherworldly and magical, but also a little darker than the other two books, which reflects the fact that our heroes are growing up and facing new challenges. The conflicts seem real, and we as readers can see why the characters are making the choices that they are making. We may not agree with them, but we can understand them.

Overall, The Castle of Llyr provides more information and back story on a major character in The Prydain Chronicles, as well as answering some questions left from earlier books in the series. It’s that rare book, a very satisfying middle book in a fantastic series. Like the rest of the series, it was impossible to put down. If you like stories about magic and destiny that are also coming of age stories with some humor sprinkled in, you’ll probably love The Castle of Llyr (just read the other two books first).

I said this when I talked about the other two books in the series, so I’m going to repeat myself here.  I really love the Disney animated film The Black Cauldron. Honest. But, again, here’s the thing. It’s not a very good adaptation of the series and is therefore very high on my list of films I would love to see adapted properly. I still think a series of movies would work well, and making each book a film would allow for a budget that would let the filmmakers use the special effects necessary to tell the story.

For casting, I picture Taran as Thomas Brodie-Sangster, Eilonwy as Sophie Turner, Dallben as Michael Caine, Coll as Patrick Stewart, Gwydion as Ben Barnes, Achren as Emilia Clarke, Jack Gleeson as Prince Rhun, and Gurgi as voiced by Matthew Perry. Finally, King Rhuddlum and Queen Teleria, maybe Chris Pratt and someone else…she’s described as “short and stout,” but I think that’s less important to her character, so, any ideas?

We’ve still got three books, so if you have any ideas, let me know in the comments. I’m going to keep thinking. As far as recurring characters go, now it’s just Fflewddur and Doli that I’m having a hard time casting, but they’re kind of important… Also, I can hear the voice I want for Glew, sort of high-pitched, but not too squeaky. I don’t know who that voice belongs to, though. What do you think?

Who would you cast? Have you read The Castle of Llyr? Let me know what you think in the comments!

“Happiness in a marriage is entirely a matter of chance.”

Our romance-themed entertainment site is on a mission to help you find the best period dramas, romance movies, TV shows, and books. Other topics include Jane Austen, Classic Hollywood, TV Couples, Fairy Tales, Romantic Living, Romanticism, and more. We’re damsels not in distress fighting for the all-new optimistic Romantic Revolution. Join us and subscribe. For more information, see our About, Old-Fashioned Romance 101, Modern Romanticism 101, and Romantic Living 101.
Pin this article to read later! And make sure to follow us on Pinterest.
By Bailey Cavender on April 25th, 2016