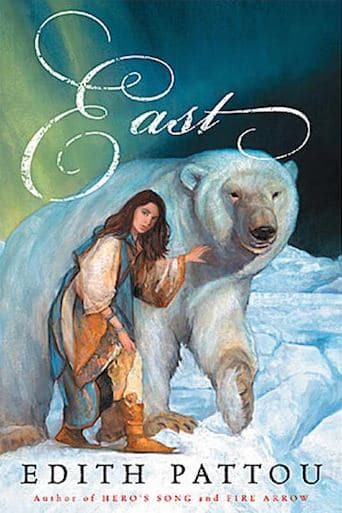 Edith Pattou’s East is a retelling of a Norwegian fairy tale, “East of the Sun and West of the Moon.” (In the UK and Australia the novel is titled North Child.) Readers will find similarities to the story of Beauty and the Beast, as well as Cupid and Psyche. Here the story follows Rose, a teenager growing up in the shadow of her brothers and sisters on the edges of the tundra on a farm in Norway. Her mother, Eugenia, is extremely superstitious while her father, Arne, is level-headed and the complete opposite of his wife. Eugenia wanted to have seven children to meet all the points of a compass, except for the direction of North, due to a prediction that was given to her by a skjebne-soke, or fortune-teller.

The skjebne-soke claimed if Eugenia gave birth to any children while she was facing North, that child would die a cold and terrible death, buried under ice and snow.

Rose’s birth was to make up for her older sister, Elise, who passed away. Elise was an east-born, and Eugenia was set to have a replacement child who would also be east-born, but Rose’s birth proves otherwise and ends up being a north-born. Eugenia, frightened that Rose will be the daughter to die in the ice and snow begs Arne to cover up Rose’s birth direction; to claim that Rose is an east-born. The lie is kept though Arne is wrought with guilt over it.

Rose grows up to be a stubborn and willful child, antsy to explore outside of her home: north-born attributes, as Arne is quick to realize though Eugenia would rather ignore this. Though Rose is adventurous, it is her older brother Neddy, who is her close companion, and her guide to keep her safe and at home. When Rose falls into a stream and Neddy sees a white bear rescue her, he is convinced that he imagined the amazing act. But as Rose begins to tell stories about this white bear, Neddy is not so sure that he did imagine the bear.

The family, unfortunately, falls on hard times, as Arne loses his mapmaking business after his business partner dies. They move to a small farm outside of the city, but soon realize that Arne is no good at being a farmer. As they struggle to survive, another of Rose and Neddy’s siblings, Sara, grows ill. As their circumstances become worse, the family seems to have no way to save Sara. Late one night, a white bear appears on their doorstep and tells the family that if they give Rose to him, they will become wealthy and Sara will get better. Neddy and Arne are distraught over even the idea of Rose leaving, though Eugenia seems to think that this is the only solution. The truth about Rose’s birth direction is revealed through one of her father’s wind roses — a gift each of the children received.

Rose sees that she is indeed a north-born, and decides to leave with the white bear, to claim her destiny as a traveler.

When Rose travels with the white bear for over a week’s time, they journey through terrain to a land that is unfamiliar to her. Their destination is a castle carved out of a mountainside, where Rose is free to roam the halls through rooms with fantastic delights awaiting her. She is, however, alone, save for when the bear joins her. He is unable to speak for long periods of time, so their interactions are mostly silent. Rose discovers a room in the castle that holds a loom — working the loom being one of the activities she enjoyed while at home — and she spends long hours crafting tapestries and pieces as the bear sits and watches her. She knows that there is a mystery behind why the bear acts as he does, but it is not until she begins to have a visitor at night that she realizes there is much more to his story than she even realizes. Her long journey with the bear was only the first part of her sojourn, for a troll queen threatens to destroy the life Rose and the bear have made in the castle together.

Told from multiple viewpoints, East will entice readers of fantasy, fairy tales, and romance. Pattou’s writing has an ethereal quality to it, and the descriptions of both Rose’s home, the castle, and the icy tundra where she eventually travels are wondrous. Readers who are familiar with the origins of the story will see how the pieces of the original tale are cleverly worked into the narrative. I loved this novel as a teenager, and it was just as enjoyable re-reading it as an adult. Though the chapters told from Rose and the bear’s point of view might be more interesting to readers than the chapters narrated by Neddy or Arne, Pattou gives the reader a full, wonderful story, with plenty to interest the reader. You can buy this book on Amazon.

East is meant for the silver-screen! Wide shots of the tundra would enchant audiences, and the story has enough romance and thrills to appeal to many! For Rose, I would cast Devery Jacobs, who is mesmerizing in Rhymes for Young Ghouls. Though that film has a much darker plot than East, Devery showed that she can carry a dramatic film, and Rhymes almost has a twisted fairy-tale-like quality to it, which she could translate to the much more serious scenes in East. Neddy plays a big role in the story, so I would cast Robert Sheehan (Simon in The Mortal Instruments: City of Bones and Nathan on TV’s Misfits) to portray Rose’s (somewhat hesitant!) supporter of her adventures. The troll queen is an antagonist who does garner some sympathy and Anne-Marie Duff (Fiona on the British version of TV’s Shameless and most recently seen in Suffragette) — with a good makeup job! — could portray this villain splendidly!

Will you be checking out East? Have casting suggestions of your own? Sound off below…

“You pierce my soul. I have half agony, half hope.

Our romance-themed entertainment site is on a mission to help you find the best period dramas, romance movies, TV shows, and books. Other topics include Jane Austen, Classic Hollywood, TV Couples, Fairy Tales, Romantic Living, Romanticism, and more. We’re damsels not in distress fighting for the all-new optimistic Romantic Revolution. Join us and subscribe. For more information, see our About, Old-Fashioned Romance 101, Modern Romanticism 101, and Romantic Living 101.
Pin this article to read later! And make sure to follow us on Pinterest.
By Clarissa Hadge on November 30th, 2015