Reading fractured and retellings of fairy tales never get old in my book. So, I was thrilled when I came across Alethea Kontis’ first installment of the Woodcutter Series. Almost immediately I knew I had discovered something special.

With a well-versed pen, Kontis creates a bewitching and delightful world with characters that will keep you spellbound until the final chapter closes.

Sunday Woodcutter, the youngest of seven daughters in this fairy tale mash-up, is a writer and storyteller with a terrible catch: everything she writes ends up coming true.

Feeling like she is in the shadow of her more magical and accomplished sisters (one of which became a Pirate Queen and another sister a princess thanks to a prince’s sneaky pea), Sunday enters into the woods and meets our romantic, bewitched frog.

Slowly, or rather quickly actually, their friendship deepens and after a true love’s kiss, the frog transforms back into Prince Rumbold of Arilland, someone Sunday’s family blames for her brother’s death.

Of course, to complicate things even further, Sunday does not know of the curse’s end so when she meets the Prince at the ball and falls in love with him, she questions both her loyalty to her family as well as to the enchanted frog she believes dead.

In true fairytale fashion, villains emerge and it is up to Sunday and Rumbold to save the day. But when Rumbold’s evil father plans to marry Sunday’s sister Wednesday, can they save her and the kingdom before it is too late? And will Sunday forgive Rumbold once she discovers the truth of his deception?

With a well versed pen, Kontis creates a bewitching and delightful world with characters that will keep you spellbound until the final chapter closes. 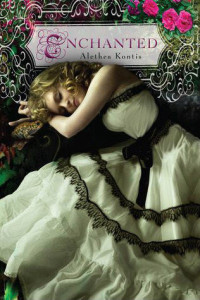 With able humor and a pure magical style, Kontis crafts a new, believable fantasy world where various fairy tales collide seamlessly. Part Cinderella, Frog Prince, Jack and the Beanstalk and more, readers will love discovering all the references sprinkled throughout the entire novel.

Yes, the romantic relationship feels slightly rushed in the beginning. And, the plot is incoherent in parts. Not to mention, the side characters become more interesting than the two main protagonists at times (can I have a whole novel on Wednesday and the Duke?).

Still, Enchanted is an entertaining story definitely worth checking out, particularly for all those fairy tale fans out there. I especially look forward with eagerness to the next installment about Sunday’s more tomboyish sister Saturday.

Because this familiar fairy tale story has such a clear beginning, middle, and end, I think a film adaptation would work best for this particular novel.

It also has strong potential for sequels (Pirates of the Caribbean style) with the promise of future fractured tales to tell.

What do you think about Enchanted? Sound off below…