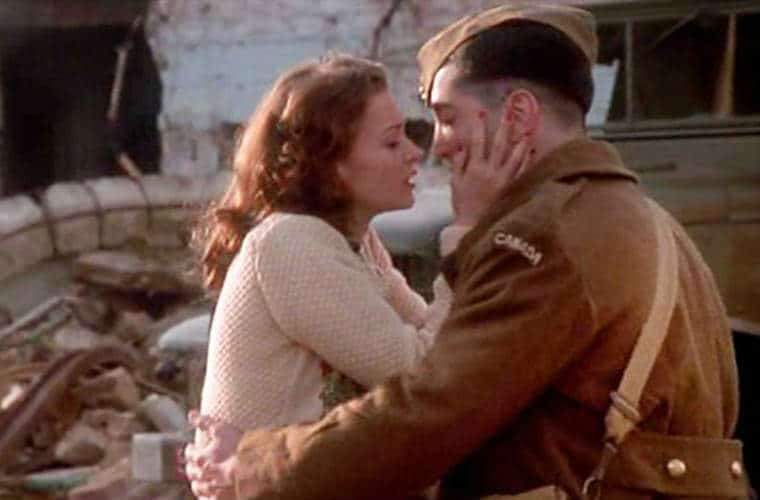 The War Bride is a film of contradictions. It relies on one spectrum of a genre before delving into darker territory, which doesn’t help its cause. Still, the film is an interesting study in character if nothing else.

The story’s “War Bride” is Lily (Anna Friel), a young Londoner who, like her friends, is looking for a handsome soldier to dance with. She soon meets such a soldier named Charlie (Aden Young). A soldier with a Canadian unit, he’s besotted by Lily from the moment they lock eyes. Following a whirlwind courtship, the pair marry. The few days that follow are brief but blissful before Charlie must again rejoin his unit. Coinciding with this is Lily’s discovery that she’s pregnant.

Time passes, and with it, Lily only sees Charlie a fleeting number of times. Soon, she’s sent tickets for passage to Canada where she’s to live on his family farm. Once there, things are not the rosy picture Charlie painted. With her young daughter, Lily must navigate life on the farm and learn to make nice with his resentful mother (Brenda Fricker) and bitter sister, Sylvia (Molly Parker).

Despite the imperfections, I liked The War Bride. It’s a period drama I suspect is relatively unknown. Though not the best (production or quality) WWII drama to grace our screens, it’s not a waste of time. I ran across it on Amazon Prime, and figured with its leading lady (whom I became familiar with after Pushing Daisies), it’d be worth a look. The opening titles are brilliant. The stark black with its white text is nothing special, but it’s the sounds of war we hear but don’t see that pulls us in. The fear of not knowing is often greater than knowing, and this script quickly pulls its viewer in because of this.

The story rapidly digresses into a lighter comedy. The whirlwind romance between Lily and Charlie propels them into goodbye as Charlie rejoins his unit. Much of the story continues on this way as we experience Lily trying to fit in (often with comical results) as an outsider before it again devolves into a darker story. (This is thanks to what we learn of and about Charlie.) Still, this is by no means a depressing story. 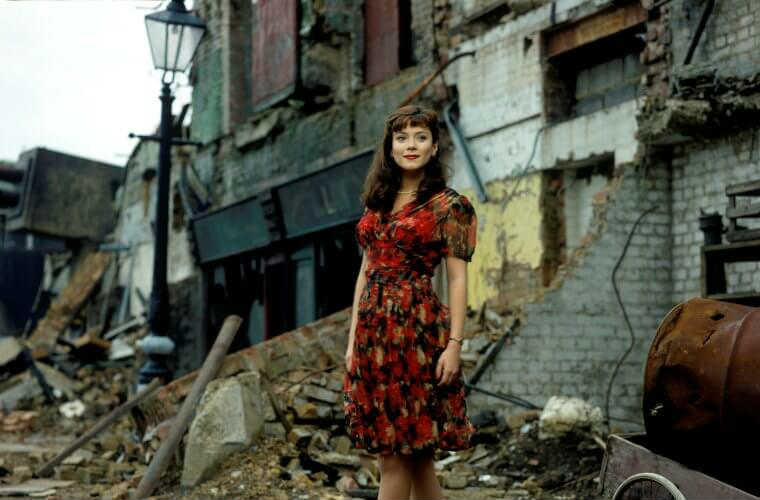 The cast all turn in good performances. Rare though their screen time is, I liked the gentle romance between Anna and Aden’s characters. Lily is admirable for her pluck and determination to stick it out and do right by the husband she barely knows. Claudie Blakeley (Lark Rise to Candleford) briefly appears, and Julie Cox (David Copperfield) plays Lily’s best friend.

Though some of the topics were awkward (such as Sylvia’s aversion to anything pretty), I do understand what the writers were trying to do. I think they came across more misplaced than well-developed, though this might have something to do with length (which is relatively short). As a story, this is a tender tale that is able to distance itself from the horrors of its backdrop. I admire this about the story. It has a slower pace, but the payoff is worth it. The ending leaves some things up in the air which might bother potential viewers. Though the greater import is that it leaves everyone in a very hopeful place.

The War Bride is currently free for Amazon Prime subscribers. If you aren’t a Prime member, you can rent and purchase on Amazon Video. Or buy it on DVD through Amazon’s Marketplace.

Content Note: There are three sensual scenes, none of which become graphic. There’s also one brief scene of female nudity.

Our romance-themed entertainment site is on a mission to help you find the best period dramas, romance movies, TV shows, and books. Other topics include Jane Austen, Classic Hollywood, TV Couples, Fairy Tales, Romantic Living, Romanticism, and more. We’re damsels not in distress fighting for the all-new optimistic Romantic Revolution. Join us and subscribe. For more information, see our About, Old-Fashioned Romance 101, Modern Romanticism 101, and Romantic Living 101.
Pin this article to read later! And make sure to follow us on Pinterest.
By Rissi JC on September 13th, 2016