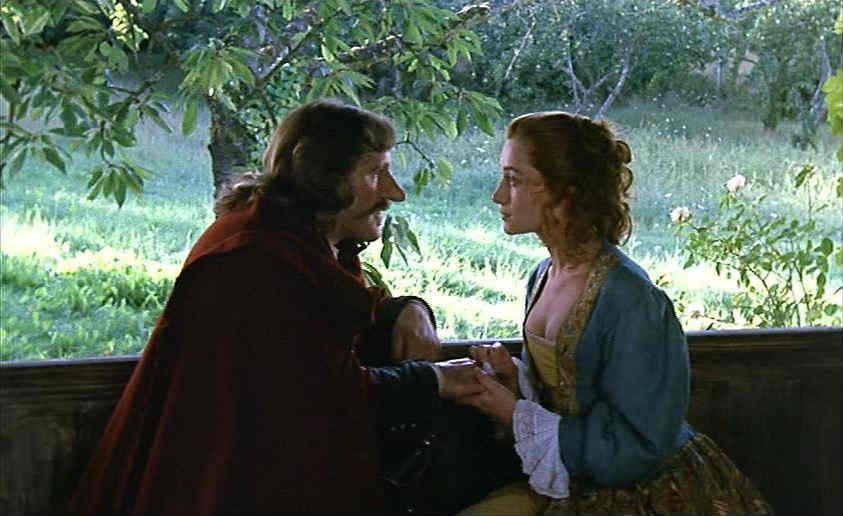 Cyrano De Bergerac is a witty, action filled film adaptation of the French play by Edmond Rostand. While there really was a Cyrano De Bergerac, the play only uses aspects of his life in a fictional account. It is notable for being written entirely in rhyming couplets (the English translation does it’s best to do the same without deviating too far from the original text). The play is also known for having the second most famous balcony scene in literature.

Cyrano de Bergerac is a high ranking soldier and accomplished poet given to passionate speeches and eloquent put-downs to those unlucky enough to offend him. He is in love with his beautiful and intelligent cousin (by marriage), Roxanne, but believes that she could not love him due to his comically sized nose. After a night in which he fights a duel (taking on a hundred men single-handedly) while composing poetry, he works up the courage to confess his feelings. However, before he has the chance, Roxanne tells him that she has fallen in love with Christian, a handsome young man that she has yet to speak to. As he is coming to join Cyrano’s regiment, she asks Cyrano to look after him as she has heard that new men are treated roughly.  Heartbroken, he reluctantly agrees.

Ultimately, Cyrano finds the young man to be a bit of a blunt instrument. Christian regrets his own lack of eloquence, saying he cannot woo Roxanne as he is while Cyrano regrets his own lack of beauty. They devise a plan; Cyrano will write letters to Roxanne that Christian will sign. Cyrano pours his love onto the page in the form of beautiful self-expression capturing Roxanne’s heart and causing her to fall hopelessly in love with ‘Christian’.  The two men have a difficult time maintaining the ruse, especially when Roxanne wants to spend time with Christian in person. This is further complicated when both men are deployed to fight the Spanish.

Reminiscent somewhat in tone and action of The Three musketeers by Alexandre Dumas, Cyrano is a tragicomic story of love and deception. It is a witty, romantic, swashbuckling and moving historical drama about a man who has influenced countless pieces of modern media. The balcony scene alone is one of the most replicated scenes in pop culture (likely made especially popular by the modernized Roxanne starring Steve Martin).

Gerard Depardieu is excellent, playing the part with perfect believability. He plays the lovelorn poet whose wit is as skillful as his swordplay in a performance which was nominated for an Oscar. Anne Brochet sparkles as Roxanne with intelligence and coquetry. The film also stars a young Vincent Perez as Christian who plays the role well but is given less to do than the other main characters.

The story is compelling and the characters are very easy to root for. There is also a good overall balance between action and romance. Despite being a translation, the English subtitles flow smoothly and lyrically, conveying all they need to.

Cyrano de Bergerac, being a dialogue-heavy foreign language production, can get a bit irritating to some viewers since you have to constantly stare at the bottom of the screen. But if you can ignore this, it is a lovely film which is every bit the masterpiece it has been hailed as. Cyrano de Bergerac is a beautiful period drama that will appeal to the romantic in all of us.

Our romance-themed entertainment site is on a mission to help you find the best period dramas, romance movies, TV shows, and books. Other topics include Jane Austen, Classic Hollywood, TV Couples, Fairy Tales, Romantic Living, Romanticism, and more. We’re damsels not in distress fighting for the all-new optimistic Romantic Revolution. Join us and subscribe. For more information, see our About, Old-Fashioned Romance 101, Modern Romanticism 101, and Romantic Living 101.
Pin this article to read later! And make sure to follow us on Pinterest.
By Elinor Cackett on February 24th, 2016