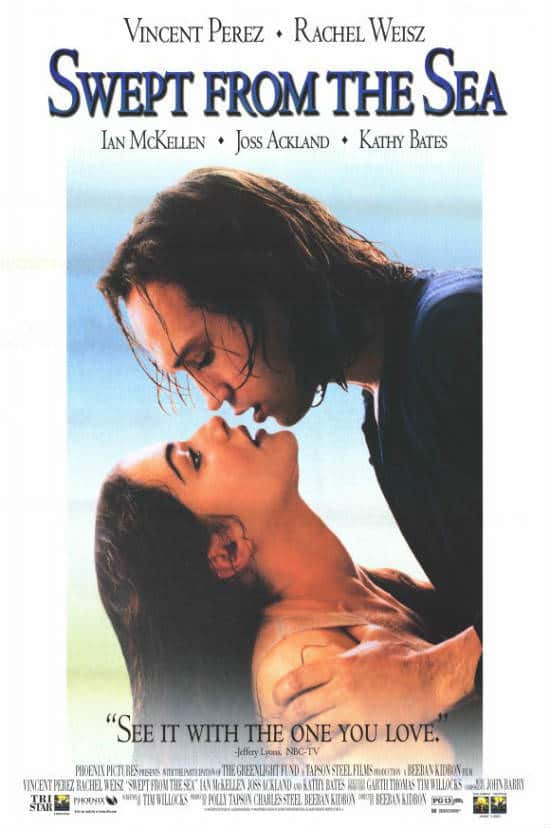 “He came across the world to love and be loved by Amy Foster.”

Amy Foster – Swept from the Sea is a story about isolation, and love despite adversity. The film is based on a short story by Joseph Conrad of the same name and is directed by Beeban Kidrun. It stars Vincent Perez and Rachel Weisz as the title character. Set in nineteenth century Cornwall, a hard and rough place, whose people are likewise ungenerous and superstitious.

We are introduced to Amy Foster atop the cliffs in Cornwall, explaining to her son how he came from the sea. She is the village outcast, viewed as stupid and strange because she defends herself from others with silence. Even the doctor who tells the story is not immune to this, taking a dislike to Amy because she confounds him.  He begins the tale of the lovers while tending to a sick lady who wishes to know the whole story. As it begins we see Amy again, on the cliffs revelling in the power of a sea storm while others rush for shelter.

We then meet Yanko, a passionate young man who we first see celebrating with his family. He is next seen leaving on a long journey to America, on which he pins all of his hopes and dreams. However, the ship is lost in the storm killing all but Yanko who finds himself wandering alone in a strange land. He stumbles upon the farm where Amy works. Bedraggled and dirty, he is believed to be a madman. He is beaten by the farmer and thrown into an outbuilding. Amy is the only one to try to understand him as he is unable to communicate, knowing no English. It is also Amy who comes to him later with sustenance, blankets and water to wash his injuries. Touched by her kindness, he kisses her hands. When he is taken away by a local landlord who claims the care of him, he tells her in his language that he will return.

A year later, Yanko becomes a hired worker and the doctor steps into the story. He figures out Yanko’s origin which until now had remained a mystery. The doctor proposes to teach him English in exchange for chess lessons. The two become fast friends. Once Yanko has his first wage packet he reveals that he has not forgotten the girl who showed him kindness or his promise. He seeks Amy out to thank her and ask her to court him. Fascinated by each other despite the discouragement of everyone around them they begin walking out together. 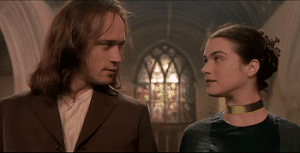 The love story is a gentle growing thing between two kindred spirits, both outsiders in their own way. This is seen most when they escape to Amy’s hidden cave to explore the wonders she has collected that wash up on the beach, as Yanko did. The two strive to be together but as their story begins with a storm and tragedy, so does it continue.

It has a talented cast playing a diverse range of characters. Sir Ian McKellan, Joss Ackland, Zoe Wanamaker, Tom Bell and Kathy Bates also star, among others. The film is thick with half told tales of secondary characters. The doctor who lost his family to typhus fever. The woman who had a riding accident that left her paralysed, causing her fiancé to leave her and worst of all Amy’s mother who was raped by the father of her husband and gave birth to Amy, who for this reason cannot bring herself to love her daughter.  The music is passionate and moving, a yearning score, rising and falling much like the sea that is so important to the story. The acting is simple and understated, subtly hinting to the deep emotions beneath the surface. Though the pace can be slow at times, it gives the plot time to unfurl properly.

At its core this is a story about the resilience of the human heart.  Summing up, this film will appeal to anyone who has ever felt different and been made to feel that difference. It has a well-acted and beautiful love story, a well-developed cast of side characters and a wonderful soundtrack. I thoroughly recommended it.

Our romance-themed entertainment site is on a mission to help you find the best period dramas, romance movies, TV shows, and books. Other topics include Jane Austen, Classic Hollywood, TV Couples, Fairy Tales, Romantic Living, Romanticism, and more. We’re damsels not in distress fighting for the all-new optimistic Romantic Revolution. Join us and subscribe. For more information, see our About, Old-Fashioned Romance 101, Modern Romanticism 101, and Romantic Living 101.
Pin this article to read later! And make sure to follow us on Pinterest.
By Elinor Cackett on November 10th, 2014