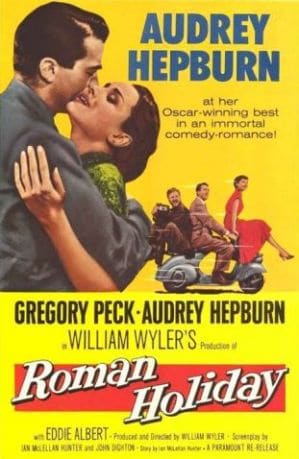 Roman Holiday is one of those films that it seems like everyone has seen it except for me. After finally watching it for myself, I can certainly understand why this film is considered a classic and why it was so positively received when it was first released back in 1953. Amazingly, the film received ten Academy Award nominations, including best cinematography, best original screenplay and best leading actress, winning the latter two.[1]

The film was written by Dalton Trumbo and directed by William Wyler. His films are often about down-to-earth characters as they face real life situations that many people can relate to and this film is no exception. As a fan of both Audrey Hepburn and Gregory Peck, I was excited to finally watch this film and form my own opinions about it after hearing so many positive things about it from others in the past. As one can imagine, my expectations were high.

The movie is about a Princess named Anne who, while on a goodwill tour of Europe, decides to sneak away from the pressures and constant schedules that make up her royal duties for a day of fun in Rome. Joe Bradly is an American journalist who finds the young princess and acts as a guide for her on her day of fun while simultaneously gathering her innermost private opinions about things for an exclusive interview. Joe’s photographer friend Irving Radovich, tags along to snap pictures of Anne without her knowledge. As he spends more time with the princess however, Joe wonders if he can go through with his plans.

When it comes to the writing, nothing really took me by surprise. There was this one scene however, that did surprise me involving the romantic leads and The Mouth of Truth that I will not give away as it was a truly enjoyable comedic moment. The characters motivations are ones that I have seen before and the progression of the plot moves at a steady pace. I do not mind it when a film tells a familiar story so long as it does it well and/or tells it in an interesting way. In my opinion, Roman Holiday tells its story well and is quite charming.

One of the most marvelous things about Roman Holiday is that it is shot entirely on location in Rome. One interesting thing I noticed is how the ancient and beautiful buildings were used as a contrast to the new, young face of Audrey Hepburn as this was her first major role in an American film[2] and thus introduced her to the general movie going public in America. During the movie, we get to see the wondrous sights of Rome through an exhilarating scooter ride through the city’s streets and market places. The camera was also able to capture the boisterous sounds and varied sights of a workday in Rome, of sidewalk cafés and of the Pantheon. The film also features beautiful shots of various landmarks such as the Spanish Steps. From these picturesque, romantic shots of the Eternal City one would have never thought it was a place still recovering from the wounds of war.

The film is about appreciating the small pleasures in life and enjoying them with people you care about.

Much of the comedy of this film is physical, which I personally like. Another interesting thing about this film is how the buildings and sculptures are tied to what the characters do in the moment, which is in my subjective opinion, done so in a humorous way. For instance, when Joe meets Princess Anne, who he does not recognize as the princess yet, she is passed out from a medical injection from her royal doctor to help her sleep. Joe takes the half-asleep princess home who is lagging behind. While leading her to a staircase, Anne circles the winding staircase while Joe ascends it. I found this moment to be funny by itself but when Joe’s arm movements to lead Anne back to the staircase end up becoming a small ballet, I found the scene even more joyful.

The film is about appreciating the small pleasures in life and enjoying them with people you care about. In Anne’s case these small things are not the most exciting but they are telling of the very different lifestyle one has when they are royalty. For Anne some of these small pleasures were wearing pajamas, getting a haircut, eating gelato on a warm day, enjoying lunch with friends at a café and going to a dance on one of the barges on the Tiber. One could interpret this as her character’s need to basically be just another face in the crowd while having spontaneous fun. The film also deals with issues of personal freedom as in Anne’s life she was born into a life of responsibility and rule.

The characters, I think, are enjoyable and quite likable. I think much of the credit for this goes to the amazing performances of Audrey Hepburn and Gregory Peck. Princess Anne was not only Audrey Hepburn’s first performance in an American film but she also won a Best Leading Actress Oscar. I have always enjoyed watching her act. Her style is very natural and seems to light up the screen when she smiles. I personally enjoyed her portrayal of this young, excitable, wide eyed, intelligent girl who yearns for new experiences. Throughout the film, she carries with her an aura of loneliness and I felt sympathy for her. Yet, I still smiled along with her as she enjoyed her day of freedom. Her bravery and her knowledge of her responsibilities as well as the love she has for her people and her country are quite admirable.

Joe Bradly as played by Gregory Peck is a likable character and one who I can understand his motivations for wanting to take advantage of his situation considering his circumstances. He is mainly doing it so that he may earn enough money to return to his home in America. He is kind, intelligent, charming and can communicate with others to help make them feel comfortable. I also like that despite his talent and the dedication he has for his work, he makes mistakes just as anyone would. He is very kind to Anne but also amused and irritated by her, especially in the beginning and I enjoyed watching the evolution of his feelings regarding the princess. Peck’s thoughtful expressions and eyes that reflect his emotions never cease to impress me.

I found the romance between Anne and Joe to be cute and innocent. I did not think it was the best romance that I have ever seen but I did still enjoy it and I thought the leads had good chemistry. I also like how the characters connected with each other more on an intellectual basis rather than a physical one. Through this mutual respect, they formed an emotional connection that was also nicely preformed. It was a bit rushed but at the same time the film takes place mostly in a single day so I understand the time constraints.

Irving Radovich is a very talented photographer and a friend of Joe. He seems to be of a worry free temperament and relaxed most of the time. He is tasked with photographing the Princess on her tour of Rome without her knowledge. This task does nothing but help the humor of the film and show his talent as he is able to capture several fast paced moments without bringing up even a slightest bit of suspicion. He is often bewildered by the stories Joe makes up off the top of his head and I enjoyed their physical, comedic interactions.

The other characters in the film play minor roles but they fulfill those roles nicely. There is Mr. Hennessy, Joe’s editor who is stern when it comes to his work. He also makes a wager with Joe about this exclusive Princess Anne interview. The other characters that interact with Princess Anne such as her ladies in waiting and the ambassador of Anne’s country succeed making her feel trapped in a gilded cage without being malicious.

Overall, I did enjoy Roman Holiday, even with its fairly predictable plot. I found it to be charming and humorous. Though humor is very subjective and some people might not be a fan of physical comedy, I personally like it. The cinematography and the sights of Rome were lovely to look at especially with such likeable and entertaining characters. The holiday one accompanies these characters on may be short but it is still an entirely pleasurable one.

Our romance-themed entertainment site is on a mission to help you find the best period dramas, romance movies, TV shows, and books. Other topics include Jane Austen, Classic Hollywood, TV Couples, Fairy Tales, Romantic Living, Romanticism, and more. We’re damsels not in distress fighting for the all-new optimistic Romantic Revolution. Join us and subscribe. For more information, see our About, Old-Fashioned Romance 101, Modern Romanticism 101, and Romantic Living 101.
Pin this article to read later! And make sure to follow us on Pinterest.
By Moriah Burbank on July 31st, 2015