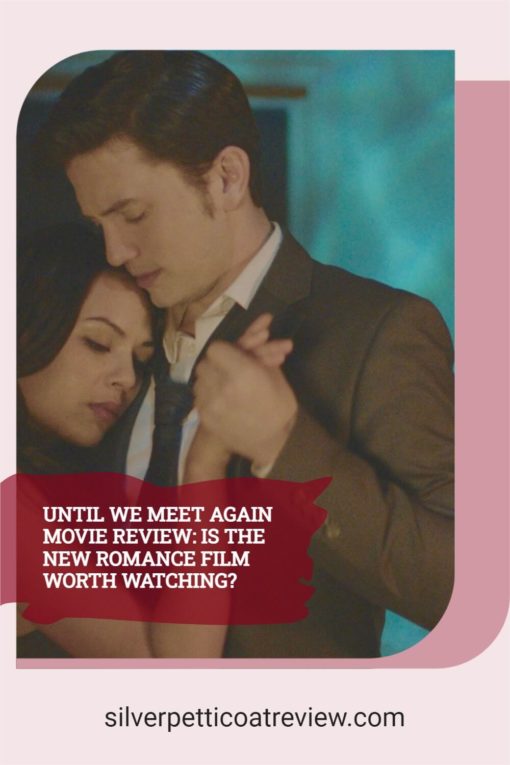 Until We Meet Again is an escapist paranormal romance film that never wholly comes together. The Ghost and Mrs. Muir it is not.

But if you love Jackson Rathbone or Janel Parrish, it may still be worth checking out. Rathbone does make for a convincing immortal, still looking much like the pale vampire he’s known for in Twilight.

Altogether, it has a likable cast and includes a few sweet romantic moments, ultimately leading to a pleasant if unremarkable movie.

The official synopsis reads: “For forty-five years the ghost of passionate young pianist Eddie Conway (Jackson Rathbone) has haunted an old house in the Hollywood Hills. When Lisa Wagner (Janel Parrish) moves in and disrupts his afterlife, the girl and the ghost find each other through music.”

UNTIL WE MEET AGAIN MOVIE REVIEW

It’s this connection to the music I most enjoyed. Wagner is a struggling singer trying to make it in the harsh L.A. music scene, while Eddie tragically died at 20 before he could finish his last piano concerto.

Their lonely souls connect through their love of music while they both struggle to move on in their lives: he from his mortal life. And she from an obsessive, cheating boyfriend.

Parrish sings a few gorgeous songs while Rathbone convincingly pretends to play beautiful classical music on the piano. The soundtrack itself is lovely, and they both portray the musical characters convincingly.

Pece Dingo writes and directs the movie, but he struggles to produce an entirely professional-looking film. The editing is choppy, the dialogue, at times, awkward, and the visual effects, camerawork, and cinematography mediocre.

A few moments made me raise my eyebrows too. Parrish goes to bed (and awakens) with perfectly applied makeup, including lip gloss, while her hair has expertly styled curls.

And then some of the story choices are inconsistent with plot holes and are overall strange. Eddie is a ghost who can smoke, eat, shower, get high on drugs, and he’s stuck inside this house even though it’s not where he died. It’s never explained why.

But all of this can be overlooked when there’s a memorable romance involved.

Unfortunately, the romance itself is sweet but not remarkable. Still, I’m a sucker for a paranormal love story – so I mostly enjoyed the scenes between Eddie and Lisa inside the haunted house.

RELATED: ‘The Turn of the Screw’ – A Gothic Ghost Story Fans of ‘Downton Abbey’ Should Watch

Rathbone is a good brooder, which helped the film’s pace and its romance. And he looks terrific. So amazing, in fact, I wondered if they filmed this movie almost a decade ago.

The film takes place in 2013, oddly enough. So how old was Rathbone in this film? I can’t really tell! If he’s actually a 37-year-old man playing the 20-year-old ghost of a young pianist, well, props to him and the makeup department.

Overall, the ideas are good for the love story, even if not perfectly executed. And it may be fun for diehard fans of Twilight and Pretty Little Liars to see the actors play off each other.

One of my favorite parts of the film was the few scenes between Antonio Fargas and Leslie Jordan. They’re soul collectors trying to get Eddie to pass on – with Jordan bringing his hilarious and sassy style to the part. He’s even named “Angel.”

That gave me a good giggle! Whenever the two are onscreen together, you can’t help but smile. A part of me wished they were the main characters!

While Jackson Rathbone and Janel Parrish’s characters are cute together, the dialogue is cheesy and unbelievable at times. Until We Meet Again cannot be wholeheartedly recommended to anyone but fans of the actors or dedicated lovers of the paranormal romance genre willing to overlook the low-budget and amateur-looking filmmaking, not to mention the average script.

But if you’re looking for escapist entertainment and don’t mind that this is more like a Lifetime TV production than an epic feature film, this might be a good choice! Also, expect a surprise switch to the thriller genre in the final scenes of this movie.

All in all, it was a strange film that had potential it never met, but it was a pleasant diversion.

And now I think I’ll watch The Ghost and Mrs. Muir again or even Casper! It feels like the perfect time now that I’m in the mood. I do love a good paranormal romance ghost story.

Where to Watch: Rent/buy on digital platforms.

Content Note: NR, but it would be PG-13 for mild violence, frightening situations, language, sensuality, drug use, and brief nudity. Nothing overly explicit.

Have you seen the Until We Meet Again movie yet? What did you think? Do you agree with our review? What is your favorite romantic ghost film? Let us know in the comments!