This review does contain spoilers!

As much as I love period dramas, there are some that typically aren’t my “cup of tea.” But I decided to check this one out because I’m fond of an actor in the cast. The period drama is the adaptation of Henry James’ The Turn of the Screw. A Gothic tale that’s primed to make you question everyone.

The narrative opens with our protagonist Ann (Michelle Dockery) sitting in an insane asylum. She remains motionless as she sits in a chair with the look of a bedraggled woman. At the hospital is a curious doctor named Fisher (Dan Stevens). He believes he can help Ann. If only she’d tell him what happened at the country estate called Bly, where two young children were in her care.

Slowly she begins to open up to Dr. Fisher about her life at Bly, the strange happenings and the mysterious staff, led by housekeeper Sarah (Sue Johnston), all of which lead to tragedy. 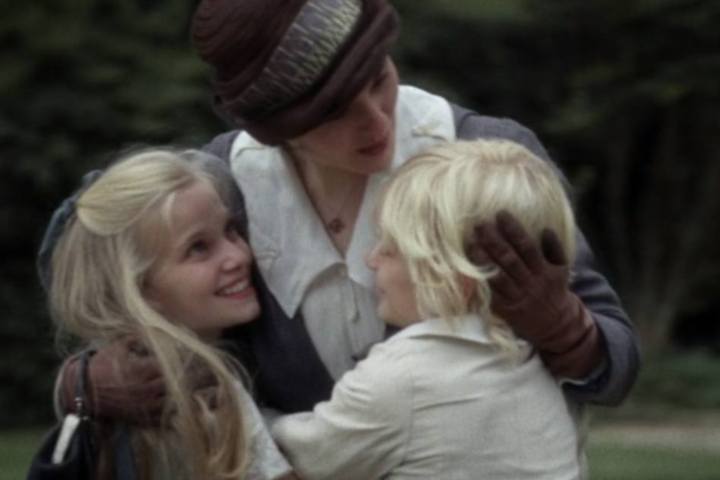 Written by Henry James in 1868, this novella actually first appeared as a serial in a publication called Colliers Weekly Magazine. Also known for The Portrait of a Lady and The Wings of the Dove, James’ Gothic ghost story is interesting. Though it’s been previously produced for the screen, this is the first time I’ve experienced the story in any format. The concept is intriguing but this adaptation doesn’t fully form, nor is it a happy kind of tale.

The script is in good hands with Sandy Welch who you may recognize from BBC’s Emma and Jane Eyre. With a run time of only 88 minutes, the story has to keep its pace moving forward with little time to pause for nuance. This said, the story does feel complete to a certain extent, which surprises me. We learn what happens at Bly from Ann’s narrative though as is the case with many ghostly stories, much is left to interpretation. Is it Ann who’s mad or is there something sinister haunting her and the children?

Aside from the cast, what I like best about this production is its dark vs light contrast. The story brims with dark undertones and “frightening” possibilities, but it’s more of the subtle than visual variety. Part of this is due to the beautiful scenery, seasonal setting (summer time), and the white muslin costumes. Bly is a crumbling old mansion, but the lovely outdoor scenes and picnics make everything look idyllic.

Likewise, the cast makes this production seem cheery. Especially for someone like me who adores Downton Abbey. To see Dan and Michelle in something so drastically different from their Matthew and Mary (the show’s fan favorite “ship”) is a dream. Both turn in exceptional performances as does the rest of the cast. Despite its appearance, this isn’t a happy “bonnet story.” It’s dark and leaves us feeling as if no one is safe. However, if you enjoy Gothic-esque stories, but don’t like terrifying elements, The Turn of the Screw just may be the ideal choice.

Where to Watch: You can watch The Turn of the Screw on Amazon Prime (at time of publication). You can also watch rent/buy on Digital/DVD.

Content Note: There are about 3-4 sex scenes, none of which remain on-screen long, but they do have nudity. There are also some tense situations and a great deal of suggestion of depravity in the household. Another character commits suicide (we see her bloody body on the ground). The film is TV-14.

Our romance-themed entertainment site is on a mission to help you find the best period dramas, romance movies, TV shows, and books. Other topics include Jane Austen, Classic Hollywood, TV Couples, Fairy Tales, Romantic Living, Romanticism, and more. We’re damsels not in distress fighting for the all-new optimistic Romantic Revolution. Join us and subscribe. For more information, see our About, Old-Fashioned Romance 101, Modern Romanticism 101, and Romantic Living 101.
Pin this article to read later! And make sure to follow us on Pinterest.
By Rissi JC on October 8th, 2018