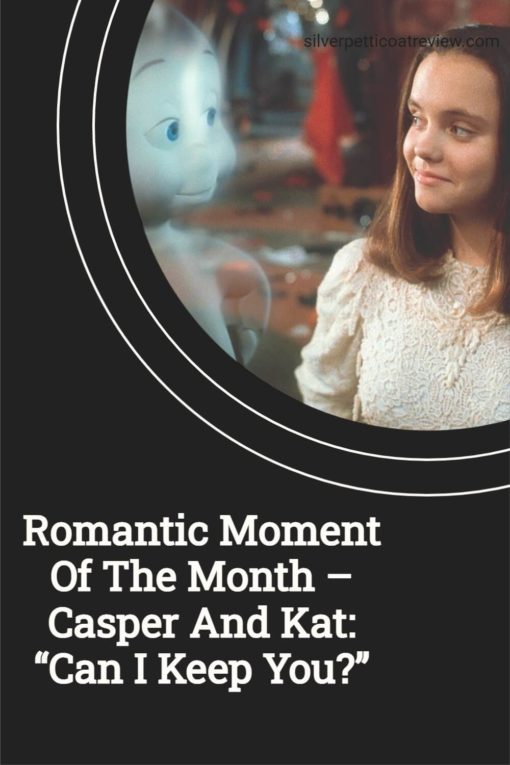 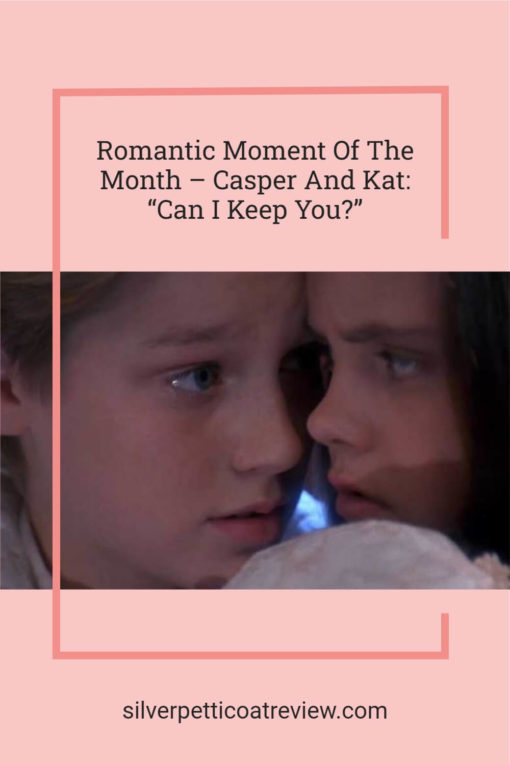 CASPER AND KAT: CAN I KEEP YOU?

THE MOMENT: Casper has one night as a human and dances with the girl he loves.

I still remember the preteen thrill of watching Devon Sawa appear on the staircase for the first time. My heart raced and swooned as the human Casper danced with Kat at her Halloween bash.

While I can’t pinpoint the exact moment my interest in supernatural romances began, I was definitely hooked by the end of this family movie. The romantic moment was special. Memorable. Epic even in my young eyes.

Recently, I’ve begun feeling nostalgic for all my preteen and teen favorites. Could and would these films live up to the scrutiny of a more discerning adult?

While I doubt Ladybugs would hold up well (did anyone else love Jonathan Brandis back then??), I had higher hopes for Casper. And yes, it was almost as good as I remembered. And ever so much darker (the dark comedy with the adults can be pretty funny).

Sure, I don’t swoon over preteens dancing anymore, but the feeling brought me back to the past in a good way. Maybe it will for you, too, as I take a look back at this classic romantic moment between Casper and Kat.

And since it is the month of October, what better time than now to look back at one of the sweetest paranormal romances to hit the big screen?

Casper and Kat – The Lead In

Casper, our favorite friendly ghost, was lonely. He only had his horrid ghost uncles to keep him company. So, he maneuvers Kat and her father, a ghost therapist, to come to move to his mansion in Maine.

Soon after, he quickly befriends Kat, who’s the same age as when he died. He finally has a friend. And so does she, as she’s never stayed in one place for long before.

They talk late into the night. He even takes her flying into the dark sky. These two lonely kids don’t need to be alone anymore. It’s here that she can finally find roots and a real friend in Casper.

“Can I keep you?” he whispers, kissing her on the cheek, a kiss that feels like a chill in the room.

It’s a sweet moment. But for Casper, it just reminds him that he’s no longer alive. He wants to be human again.

Thankfully, his scientist father from long ago created a Lazarus machine to bring one person back to life. Casper has a second chance at life again!

But when Kat’s father dies, Casper does the noble thing. He gives Kat back her father. She already lost her mom, after all. It’s a selfless sacrifice that leads into our classic romantic moment of the month.

Because of Casper’s sacrifice for Kat, an angel appears to him. It’s Kat’s Mom, and she comes to reward his goodness with a gift.

He has one night, a moment in time really, to be human again. Casper has the chance to go to Kat’s Halloween party. But like Cinderella, there’s a time limit. He has only until the clock hits ten.

The song begins, and our human Casper enters the scene. We can’t see his face as he walks down the stairs, through the crowd, and up to Kat to ask for a dance.

She agrees, awed by the cute boy who asked her. Slowly, he leads her to the dance floor, and they start dancing, the film taking a closer look at his face.

Casper and Kat gaze at one other in an adorable first love kind of way, Kat still in wonder at the identity of the mystery boy. There’s just something so familiar…

Casper puts her arms around his neck, and before she realizes it, the two float sweetly in the air!

Kat looks down and realizes she’s not on solid ground anymore. So, she hangs on to Casper, and he whispers, “I told you I was a good dancer.” And then that infamous line again that stayed with me and other tween and teen girls over the years:

It’s at that moment Kat recognizes Casper in his human body. She hugs him happily as the crowd backs away from the frightful scene of them dancing on air.

Everything is magic and beautiful and enchanting, but then the clock strikes ten. The moment is almost over, like so many good fairy tales.

So, Casper takes his one last chance as a human boy and kisses the girl he loves. It’s almost sad, in a way.

Thankfully, this being a family movie, the comedy returns instantaneously. When Kat opens her eyes, the human Casper is gone, and our friendly ghost returns.

He turns to the horrified group of young teens, smiles, and sheepishly says, “Boo.” It’s a great way to end the scene and our Halloween romantic moment this month.

Years later, I like to think that Kat and Casper would have found a way back to each other. His father was the famous scientist who created the Lazarus machine, after all. It probably ran in the blood…

Does anyone else have fond memories of Casper? Do you love Casper and Kat and the “Can I Keep You” moment? Wouldn’t it be awesome if Christina Ricci and Devon Sawa starred in a new paranormal romance TV series together? I would so tune in for that.

8 thoughts on “Romantic Moment of the Month – Casper and Kat: “Can I Keep You?””