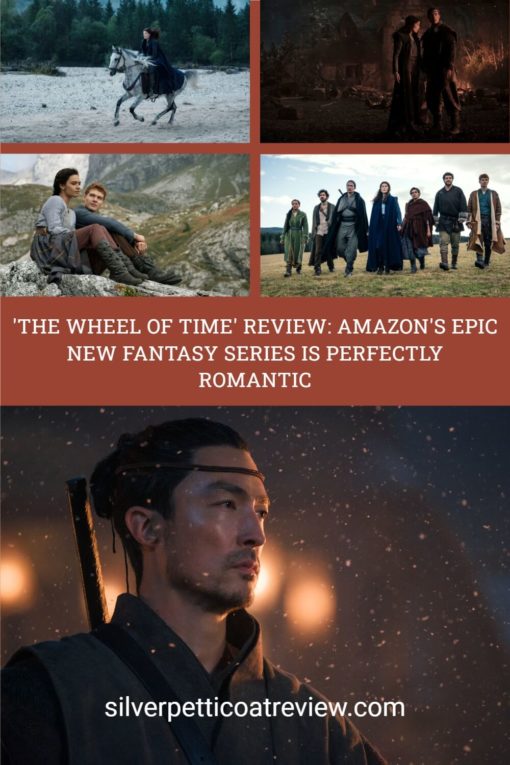 The Wheel of Time, an adaptation of Robert Jordan’s high fantasy book series (focusing on the first book, The Eye of the World), tells an epic story full of magic, intrigue, action, and romance.

So, just how good is the new Amazon series?

Well, fellow fantasy fans… rejoice! The new Amazon adaptation (developed by Rafe Judkins) does justice for the books (and fantasy genre). It is one of the best high fantasy series I’ve seen because the story does not seem to be rushed or condensed to the point of being unrecognizable.

It also helps that the series has movie-quality production values, visually pleasing locations (Prague) and sets, and a cast of excellent actors.

The Wheel of Time begins by introducing the main characters and their world. It is full of the standard high fantasy elements one expects from the genre – an epic struggle between good and evil, prophesies, magical creatures, a hero’s quest, memorable friendships, epic love stories, and more.

What makes the series stand out, however, is the well-developed, three-dimensional characters. Each character has their own motives, hopes, dreams, fears, insecurities, strengths, and weaknesses, making it easy to empathize and connect with everyone.

The actors are also the perfect fit for the characters they play – the leading ensemble cast all deliver strong performances that make the show even more engrossing.

The Amazon original show stars Rosamund Pike as the magical Aes Sedai Moiraine (a channeler of the One Power) and her Warder Lan Mandragoran (similar to a Lady’s Knight) played by Daniel Henney.

Rounding out the cast (although so far he’s only recurring) is Alexandre Willaume as Thom Merrilin, a gleeman and also a Strider/Aragorn-like mysterious figure. After Lan and Moiraine, he may be my favorite character.

THE STORY OF THE WHEEL OF TIME

In the mythology of the story, life cycles back every thousand or so years (or thousands?) and the wheel of time turns once more, the Dragon reborn – either for good or evil and the only hope against the Dark One (this story’s version of the Dark Lord).

One of these five is the Dragon reborn, but who? Moiraine rescues four from the Dark One’s Trollocs (the story’s version of Orcs) and takes them on a quest to the White Tower. Darkness follows as they enter into an unknown world of danger and magic.

And like any hero’s quest (in this case, heroes’ quests), the young group meets new characters along their journeys.

Never a dull moment, The Wheel of Time is by far one of the best new TV shows in years.

With a high caliber and diverse cast, superb production design, immersive dialogue, and an entertaining story, The Wheel of Time gets just about everything right, paving the way for other epic fantasy novels to make their way into the small screen. This show is how stories get done right!

I also appreciate that it’s not excessively explicit for the sake of it—no disturbing assault scenes against women. And so far, the love scenes are tasteful and more behind closed doors – much more suitable to my tastes (and I’m sure many others out there who couldn’t get past the disturbing and exploitative content of Game of Thrones).

While Moiraine and Lan are the most compelling characters and actors, the growing love story between Lan and Nynaeve is alluring and epically romantic. I’m sensing a soul connection, and I am here for it. Lan may even be a Byronic Hero. We shall have to wait and see.

Without giving much away, episode four takes the slow-build relationship between Nynaeve and Lan to intriguing levels, making me a huge fan of the pairing.

RELATED: Until We Meet Again Movie Review: Is the New Romance Film Worth Watching?

However, I was a bit disappointed there wasn’t more of a romance between an Aes Sedai and a Warder in a Lady and Knight kind of way. At least so far. The chivalric love from the past influences all love stories today. So, it would be nice to see more of that in the series!

Currently, the relationship between Lan and Moiraine is more ambiguous – but overall, it seems more like platonic love than romantic.

Nevertheless, the possible Lan and Nynaeve romance is one for the ages. And for all the young viewers out there, the teen romance between Rand and Egwene is sweet, complicated, and promising.

EVERYTHING COMES TOGETHER TO CREATE MAGIC

The music for The Wheel of Time was composed by Lorne Balfe (Black Widow, His Dark Materials), and it is beautiful and epic, just what you’d expect from the genre. The costumes are also stunning, especially the costumes for the Aes Sedai!

And then there’s the realistic special effects, the perfectly choreographed battle scenes (although a few moments are a bit too violent for me), and the cinematography. Everything comes together in the pilot episode, and the magic literally flows from the screen.

Overall, the pilot is a solid five (out of five) for me! The rest of the season follows suit; I’m hooked and can’t wait to watch the next episode!

I admit I’ve never been able to get through all the books even though they’re excellent, primarily because of some sexist and objectifying descriptions of female characters in the early novels. Thankfully, while imperfect (the first episode senselessly kills a female character to give a male character pain – a cliche I hate), the series gives the women their due.

No titillating the audience for the sake of the male gaze here!

No, the women of The Wheel of Time TV series are the complete package: the strong and the vulnerable with the same degree of character development as the men. So, the show is not guilty of the objectifying female treatment brought on (mildly) by the books.

The casting of the characters is also much more diverse than the source material, which I love!

As for how close the show is to the book series, overall, it follows the source material pretty closely. The show is an abridged version of the books, and the writers unsurprisingly compressed the plot, but the story never suffers.

The quick pace will keep you hooked from episode to episode, so decide now if you want to watch week to week or wait and binge the entire series once it’s fully available.

I love the anticipation of waiting week to week. I haven’t been as excited about a show as this one in a long time. But then, I’m a massive fan of epic fantasy stories (in books, film, and television). So, if you’re a fan of the books, the show is an absolute must-watch.

No worries if you haven’t read the books at all, though. If you’re not familiar with the books, the show is still an excellent introduction to the world.

WILL THERE BE A SECOND SEASON OF THE WHEEL OF TIME?

Thankfully, Amazon Studios has already renewed the series for season two! While Amazon has not announced a premiere date yet, rest assured, it will likely return sometime next year in 2022 as filming for the second season started in July.

Now, since the show is based on a 14 volume epic book series (the last three books co-written by Brandon Sanderson), we’ll have to hope the show will continue for many years to come.

Overall, if you love romantic fantasy shows (like Legend of the Seeker) with a Tolkien and Lord of the Rings influence, The Wheel of Time is the show for you. Also, this is NOTHING like Game of Thrones and all its disturbing content, and as an epic fantasy fan, I couldn’t be more thrilled.

The Wheel of Time is a beautiful, epic journey that I highly recommend to all.

Where to Watch the First Season: Amazon Prime Video (New episodes release on Fridays until the season one finale. Eight episodes will air in total.)

Have you watched The Wheel of Time yet? What do you think of the new romantic fantasy series? Do you agree with our review? How did you feel about the first Wheel of Time episode? Do you think it sets the right tone, or did it not have enough light-hearted moments? Discuss below!