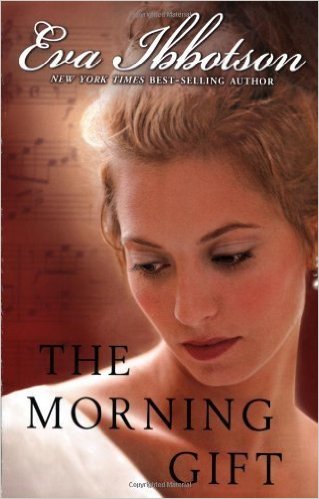 Eva Ibbotson is one of my favorite modern authors. She wrote some amazing books for kids, The Secret of Platform 13, The Island of the Aunts, and Journey to the River Sea, as well as some amazing historical fiction, A Company of Swans (which I looked at a few weeks ago) and The Morning Gift (which is one of the books that travels with me, aka, one of my favorites).

Published in the US in 1985, The Morning Gift fits in with what I have read about Eva Ibbotson’s own life; she ties in her own experiences to create compelling fiction. As the daughter of a Professor who grew up in Vienna before Hitler annexed it, Ibbotson is able to draw on that experience and fear in the story of Ruth Berger, a professor’s daughter from Vienna. Additionally, Ibbotson studied physiology, a subject that Ruth also takes while in school.

The setting of The Morning Gift plays a big part in the story, from the beginning in Vienna, to the University of Thameside in London to Northumbria and Bowmont, the Sommerville estate. As the setting changes, so do the characters. I love the way Ibbotson has her characters interact with their environments. They all react to their different environments in different ways, particularly our two leads, Ruth and Quin,  two scientists constantly struck by the beauty of their surroundings (Ruth a little more so than Quin).

The story begins by introducing us to our characters, Ruth Berger and her academic family in idyllic post-World War I Vienna, and Quinton (Quin) Sommerville and his more stoic, aristocratic family in Northumberland. Ruth, however, is the main focus of the introduction and readers grow to love the little blond girl who is just as comfortable in the art museum as she is in the Museum of Natural History, and is a tad precocious.

One summer, after Ruth realizes that she is in love with both music and her cousin Heini, Quin Sommerville, an up and coming colleague of her father (an esteemed professor of paleontology) joins the family on their summer vacation. At the time, young Ruth didn’t realize how important Quin would become to her story, and it’s clear that he didn’t realize it either. Readers, however, get a glimpse of not only this future pair, but a hint that trouble is coming, and not just because World War II is on the horizon.

We fast-forward to the eve of World War II, and Ruth finds herself trapped in Vienna when the Nazis enter Austria. Her parents, aunt and uncle have gone to England, thinking she was already there on a student visa, while her fiancé, Heini, is in Budapest. Unfortunately, due to her past action in a student protest organization, Ruth isn’t allowed to leave the country and finds herself trapped in Nazi-occupied Vienna.

This is an especially problematic situation as the Bergers are part Jewish, making them a prime target for anti-Semitism. This was why they had left in the first place, and why Ruth’s parents can’t just go back to Vienna to find her. Forced out of her home, she seeks refuge in the Museum of Natural History, where she is discovered by Doctor Quin Sommerville, the eminent paleontologist, who is in Vienna to receive an honorary doctorate.

Looking for his old friend, Doctor Berger, who arranged the doctorate and was the Dean of Science, Quin realizes that the Bergers managed to flee before Austria became part of Germany. On a closer look around Vienna, he realizes that Ruth is still there. Although he hadn’t planned to become involved beyond putting her on a train out, he realizes that her escape plan, climbing over the Alps and swimming to England, is not the best idea.

To get Ruth out of Austria, she needs a British passport, and the quickest way to get that passport is by marrying an Englishman. Once she is in England, Quin assures her, they can get a divorce. When she expresses confusion about marrying for reasons other than love, he gives her examples. These include telling her about the morning gift, something sent by a husband to his wife in the morning as a sign that their wedding didn’t count. This concept will play a major role in the rest of the book, including the name of the title.

When they reach England, Ruth convinces Quin to keep their marriage a secret. This is both to make sure that her parents don’t smother Quin with gratitude for saving her from Vienna, and to keep Heini from finding out that she is married (even if it’s only temporarily). As they try to arrange their divorce while keeping Ruth a British citizen, Ruth and Quin are advised to avoid each other, otherwise, things could get even more complicated.

The divorce proceedings are complicated and are made even more complicated by the secrets they are keeping and the arrival to London of Heini. Meanwhile, thrown together more often than they would like, Ruth and Quin discover that they complement each other; their different backgrounds and sometimes clashing personalities making their relationship stronger.

The new Chancellor of Thameside, meanwhile, has a wife and a daughter, and the latter two are determined to catch the wealthy Quin for the young lady, Ms. Verena Plackett. As Verena attempts to worm her way into Quin’s affections, he finds himself battling an attraction to his wife, and while Ruth is determined to love Heini, she also finds herself attracted to her husband. A trip to Quin’s home, Bowmont, for a field study on marine biology shows the two just how far apart they are in station, but how much they need each other.

The obstacles between Quin and Ruth seem real; what do you do when you find yourself falling in love with someone who you only married for a passport? Can a love like this survive when faced with scheming socialites, the threat of war, well-meaning relatives, and a clingy fiancé? Do class differences really make that much of a difference? Quin’s aunt Francis plays a major role in the story, as do Ruth’s relatives and all the characters at Thameside and Bowmont. The supporting characters are fleshed out and just as fun as our two leads.

I think that the way Ibbotson writes the romance is masterful, mostly because the reader can tell that Ruth and Quin are falling for each other, but we can also tell that they’re not aware of the fact yet. To me, this makes the story more compelling. As they find themselves happy or annoyed, without knowing why, the reader waits to see how long it takes these two intelligent people to figure out their feelings. When the misunderstanding occurs, we as readers know the whole story, while Quin and Ruth each only know half of it. Ibbotson ties it all together in a way that I think is still suspenseful and satisfying.

The Morning Gift also fits into one of my personal favorite tropes, a marriage of convenience that ends in love but is plagued by misunderstanding, and sets it in England before World War II, a time period that is wonderful for historical fiction; so much is happening! Quin and Ruth are a wonderful couple, mostly because they seem to be so different and yet so similar.

Quin is a wealthy aristocrat, who had a solitary childhood and became a brilliant paleontologist and professor. Ruth, on the other hand, is the daughter of a professor who, Ibbotson makes sure to tell us, was never alone growing up. While Quin is introverted in his personal life, Ruth is more outgoing.

Quin is reluctant to marry; Ruth is in love with and engaged to her fiancé, Heini, a brilliant pianist. She loves music more than Quin does, particularly Mozart while he knows more about the world in general. Willing to challenge each other, they are also united in their love of science and their classical educations.

As the threat of War creeps nearer, Ruth and Quin are faced with the feelings of hopelessness, as they both suspect what war will mean. There is also the feeling of belonging, how love is seen in both music and science, and how people, at their core, don’t really change.

As an aside, I have read this book many times, and I cannot figure out why Ruth is so in love with Heini. Is it all just because he’s a talented musician? Let me know what you think in the comments.

Like I said at the beginning, The Morning Gift is one of my favorite books ever written. It’s about 400 pages, but it doesn’t feel like it. Eva Ibbotson knows how to paint a scene; you feel like you’re there, learning about science and music and love, and the story seems to just wash over you like a piece of music composed by Mozart.

I would love to see The Morning Gift as a movie, but it would have to be very close adaptation and I would want to consult on the screenplay (just because I love the book so much). Eva Ibbotson’s books really do lend themselves to film. I think this is because she does paint such a clear picture of her settings. I had a hard time with my casting because no one really fits my idea of Ruth. I think Karl Urban might be close to how I picture Quin, though, and Judi Dench would be a fabulous Aunt Francis.

“The Stuff that Dreams are Made Of.”

Our romance-themed entertainment site is on a mission to help you find the best period dramas, romance movies, TV shows, and books. Other topics include Jane Austen, Classic Hollywood, TV Couples, Fairy Tales, Romantic Living, Romanticism, and more. We’re damsels not in distress fighting for the all-new optimistic Romantic Revolution. Join us and subscribe. For more information, see our About, Old-Fashioned Romance 101, Modern Romanticism 101, and Romantic Living 101.
Pin this article to read later! And make sure to follow us on Pinterest.
By Bailey Cavender on February 4th, 2016