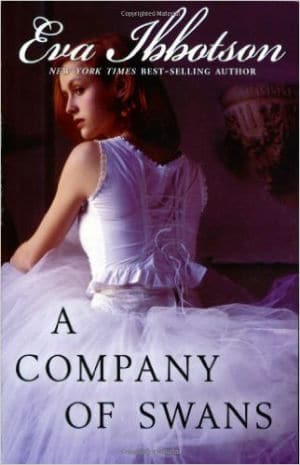 A Company of Swans Book Review

Eva Ibbotson, it seems, is primarily known for her children’s books: Which Witch?, The Secret of Platform 13, The Island of the Aunts, and so many other wonderful works. However, she also wrote historical fiction romances, and A Company of Swans is one of those books.

Although they have slightly different settings and different characters, all of these books have a lyrical quality to them, and heroines that, even when you want to smack them for being so silly, you still want to get their “happily ever after.” They just read like good people. Several of her books are set, at least in part, in Vienna or in Cambridge, two places that Ibbotson held close to her own heart.

Born in Vienna in 1925 to a family with Jewish ancestry, Ibbotson’s family moved to Britain when her father received a well-timed job offer to the University of Edinburgh. According to her Goodreads author page, she attended Bedford College, Cambridge University, and the University of Durham. Originally, she was training to be a physiologist, but she changed her focus to education.

She won multiple awards for her work before her death in 2010 and is noted as a novelist who specifically wrote in the genres of romance and children’s fantasy. In an interview, she said that she would write in specific genres or styles until they became mainstream; after that, she would move on to the next genre that interested her.

This particular novel, A Company of Swans, was first published in 1985 and has had numerous reprints. It follows the story of Harriet Morton, a girl raised in the most soul-sucking house one can imagine, on her journey to the Amazon as part of a traveling ballet company.

Though Ibbotson is quick to point out that she was not neglected, Harriet is not treated especially well. As she is raised by an aunt who has a box for string that is too short to tie and a father who has refused to allow her to go to University (why would a woman need higher education anyway? he reasons), Harriet’s only solace and time away from her confining home is in her weekly ballet classes.

Of course, Harriet also is allowed to go on outings with the Tea Circle, a whole group of ladies who are very similar to her Aunt Louisa. On one such outing to the estate of Stavely, trying to avoid both the Tea Ladies and Dr. Edward Finch-Dutton, who her father wants her to marry, Harriet meets young Henry Brandon, who asks her to keep an eye out for “The Boy,” who he believes can save his family. Harriet promises to try, a promise that will change her life forever. 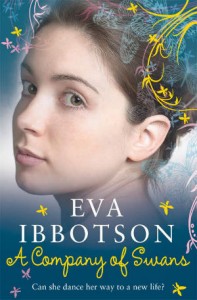 When Sasha Dubrov of the Dubrov Ballet Company comes to find his 18th Swan for his performance on the Amazon in Manaus, Harriet impresses him so much that he offers to take her, despite her lack of performance experience. Seizing her chance to live her own life and have an adventure, while pursuing a craft she adores, Harriet runs away to join the Company, very much inspired by Henry.

While in Manus, Harriet is learning and growing in her craft, forming a close tie to Simonova, the aging ballerina who is the star of the company. She also finds a friend in handsome, wealthy, and mysterious Rom Verney, an Englishman who came to the Amazon after having his heart broken. He is drawn to Harriet because of her innocence, gracefulness, and kindness, stirring up feelings he has not felt in years. Of course, Rom is also “The Boy.”

When Harriet’s father and aunt discover that she is gone, they suspect that she has run away with the ballet to the Amazon and send Edward after her to bring her home. Close behind him is the lovely widow Isobel Brandon and her young son, Henry, traveling to find Rom.

Harriet’s intended arrives in Manaus to bring her back to Cambridge, but Rom is one step ahead of him. Kidnapping Harriet himself, he brings her to his estate where they are confronted with their feelings, plagued by their past, and baffled by their future. Although miscommunication plagues their romance at every turn, the bond that they share is a strong one, and readers can’t help but root for them. Can their new-found love survive conniving relatives, a determined intended, and a love of dance? 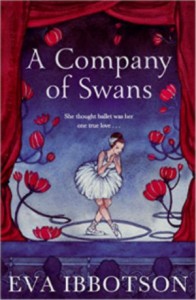 The two main characters, Rom and Harriet, are both fascinating to read. Both of them have suffered severe disappointment and tragedy in their lives, but they both recognize and love something in the other that they have never seen before. Their romance is different than others I’ve read, but it works.

Some questions raised include the following: what happens to a person who is unloved when they find love? What does greatness truly look like? It also addresses the struggle of age versus experience, love, expectation, social constructs of beauty, heartbreak, becoming great at your craft, and the journey to becoming what you are meant to be. There are funny moments, but also serious ones, like the disbanding of a corrupt rubber company.

The magic of Ibbotson’s writing is that you can see the world she creates, and this book is no exception. Readers travel with Harriet from her gloomy home in Cambridge to the lush and foreboding Amazon to the pristine aristocratic elegance of Stavely. You dance “Swan Lake” with the corps, weep at “Giselle,” and cheer for Simonova as she dances.

The supporting characters are wonderful. Simonova, the ballerina, and Dubrov, the leader of the Company, as well as the other girls in the corps, Marie-Claude, Kirsten, and Olga, the Tea Ladies, Isobel Brandon, Edward, and Professor and Louisa Morton all, add another layer to the rich tapestry that Ibbotson weaves.

A Company of Swans is not my favorite of the Eva Ibbotson romances (that honor goes to The Morning Gift), but I still love this novel. Ibbotson is able to take a story that could have been very dark in other hands and add a level of whimsy, romance, and humor to it.

I feel as though all Eva Ibbotson books deserve a faithful adaptation into film. Her books are always so descriptive, and A Company of Swans is no exception. Since a large portion of the book is showing us the setting and the dancing, it would really translate well into a movie, maybe two hours long. The setting is lush and exotic, but the focus is on the dancing and the characters, something I think could translate well in a film.

Casting-wise, first and foremost as many dancers as possible should be cast in this film. For the leads, I was thinking Lyndsy Fonseca (who plays Angie on Agent Carter), because of the need for dance experience, or maybe Kelly MacDonald. For Rom, I picture an older Ben Barnes, and Emma Stone would be amazing as Isobel Brandon. Lea Thompson could play Simonova,  though if an older dancer wanted to play that part, she should be given the option.

Have you read A Company of Swans? What are your thoughts?

Our romance-themed entertainment site is on a mission to help you find the best period dramas, romance movies, TV shows, and books. Other topics include Jane Austen, Classic Hollywood, TV Couples, Fairy Tales, Romantic Living, Romanticism, and more. We’re damsels not in distress fighting for the all-new optimistic Romantic Revolution. Join us and subscribe. For more information, see our About, Old-Fashioned Romance 101, Modern Romanticism 101, and Romantic Living 101.
Pin this article to read later! And make sure to follow us on Pinterest.
By Bailey Cavender on January 21st, 2016

3 thoughts on “A Company of Swans Book Review: An Elegant Historical Fiction”