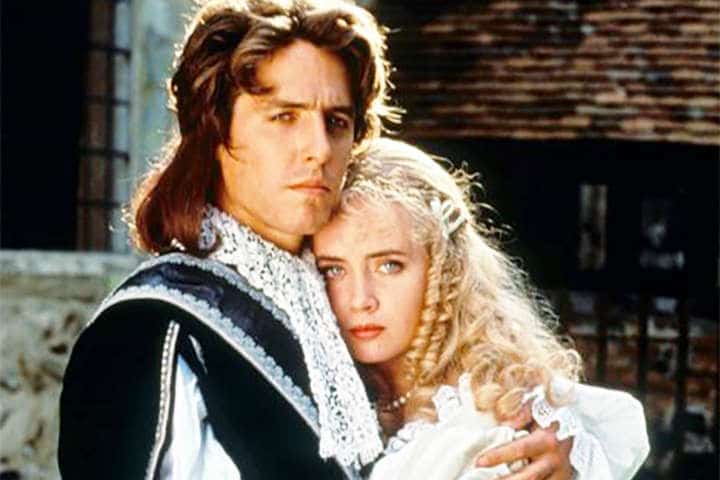 The Lady and the Highwayman, adapted from Barbara Cartland’s romance novel Cupid Rides Pillion, is the second of her romances to grace the small screen. Her books were at the height of their popularity during the 1980’s, a fact that undoubtedly attracted very good acting talent to the romance du jour!

The Lady and the Highwayman is set during the English Restoration when the exiled Charles II is making attempts to regain the English throne. Back on English soil for the first time in years, Charles soon realizes that conditions are not yet fertile for his planned coup d’état.

By his side are his trusted Royalists – Lord Lucius Vyne (a dashing Hugh Grant) and Richard Vyne, the Duke of Manson. The cousins have been devoted to the royal family and continue to put their lives at risk to ensure the King’s safety. Fearing the worst, Richard extracts a promise that Lucius care for his younger sister, Lady Panthea Vyne should anything happen to him. At this point dear reader, we already know one thing: Richard Vyne is not long for this world. But I digress…

With parliamentary roundheads loyal to Oliver Cromwell fast approaching, the party goes their separate ways – Charles and Richard to exile in France – and Lucius the decoy, successfully drawing their enemies away. 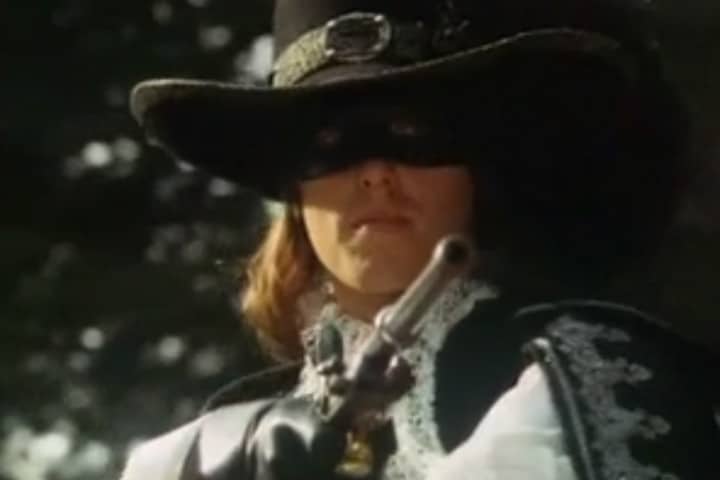 One year later at Manson Hall, Lady Panthea is riding her stallion when she discovers a notice accusing her brother of treason. Concerned and distracted about his whereabouts, she does not see another ‘wanted’ bill offering 1000 Guineas for the capture of the notorious highwayman, Silver Blade.

But Panthea has more immediate concerns. Lord Drysdale, the local creeper and Cromwell loyalist, brings news of Richard’s imminent execution. Drysdale promises to intercede on her brother’s behalf if she acquiesces to marry him. Disgusted but without choice, she reluctantly accepts the lecher’s offer.

Drysdale, however, has only one thing on his mind. The ink barely dry on the parchment legalizing their union, he makes an attempt to assert his marital rights. Panthea refuses and is fortuitously assisted by highwaymen attempting to rob their coach. Enter the infamous Silver Blade – a Robin Hood of sorts – who heroically comes to her aid.

You are not fit to live. I shall shoot you where you stand.

Following a tense duel in which Hugh Grant’s mask never slips out of place, his shirt billows in just the right way and his luscious locks ripple elegantly on the breeze, Silver Blade dispatches the odious Drysdale into the afterlife. His death, no matter how deserved, will come back to haunt both Panthea and her mysterious highwayman.

The Return of the King

Four years pass and Panthea, now chaperoned by her aunt, arrives at English court to celebrate the return of King Charles II. Kind and beautiful, she has drawn the approval of the Queen but the envy of the King’s mistress, Lady Castlemaine.

I want Milady Vyne watched every minute. As soon as I find her weakness, she will find herself wishing she had never been born.

Exacerbating matters, Panthea’s cousin Rudolph Vyne (with the help of Lady Castlemaine) conspires to gain control of the Manson fortune. Rejecting Rudolph’s advances, Panthea begins to suspect that their shared cousin Lucius might, in fact, be the highwayman she has never been able to forget.

In the final act, the murder of Lord Drysdale is unearthed to discredit Panthea’s reputation. Put on trial for his disappearance, Lucius must relinquish his secret identity and risk his own life in order to save her from the executioner’s blade. What unfolds is a thrilling adventure packed with uncovered secrets, covert meetings, court intrigue, betrayal and a veritable spider’s web of lies.

Hugh Grant has made a name for himself playing adorable romantic heroes and is quite dreamily cast as the mysterious highwayman, Silver Blade. When uttering lines like, “how can I go now that I’ve found my only happiness?” or “you will never be out of my thoughts or my protection”, what else is there to do but swoon – or giggle – rather uncontrollably? My advice: just go with it! Also, a tussled Hugh Grant with a 5 o clock shadow threatening is quite possibly my aesthetic in life.

Lysette Anthony is the perfect foil for Grant’s dark looks as Panthea. Blonde haired and blue eyed, her full, bouncy curls must surely have its own twitter handle – @theLadysLocks perhaps? They seem to have a life of their own! Nevertheless, Lysette plays Panthea as a clever heroine in her own right, making her own choices and courageously following through with it. 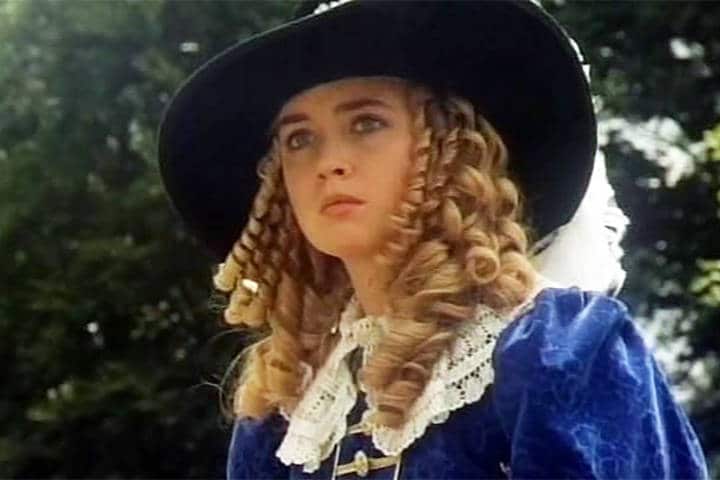 Academy Award Winner John Mills and Academy Award Nominee Ian Bannen also have small roles. Yes, your eyes do not deceive you. Barbara Cartland managed to attract actors with Oscar on their résumé! Oliver Reed and Emma Samms round out the cast, with Michael York playing King Charles II.

Of the four Cartland adaptations, The Lady and the Highwayman is the one I recall having the most repeat airings. This is no doubt somewhat attributed to Hugh Grant’s dreamy looks and Michael York’s star power. It’s also the most ambitious of the four productions and like its counterparts, the 90 minutes are packed with everything Cartland had at her disposal. There are daring escapes on horseback, a tense courtroom cross-examination, multiple duels, a romantic tête-à-tête by firelight, a home invasion and an executioner swinging his ax. All of this is underscored by lively musical compositions that fairly scream “it’s the 80’s!”

The costumes in The Lady and the Highwayman are surprisingly lavish and still look lovely by modern standards. As the leading lady, Panthea has the most beautiful gowns in gorgeous jeweled and pastel tones, while the supporting cast also shares in the lush colour palette. While it might be fair to assume that the women have the best hats in the film, a deserved mention must go to Michael York’s King Charles. The flamboyant feather plumes exploding from his head might have looked ridiculous on an actor less capable.

Simply put, The Lady and the Highwayman is a giant marshmallow topped with whipped cream. That means it’s a whole lot of fun!

Where to Watch: The Lady and the Highwayman is available for sale and streaming on Amazon and can also be streamed on YouTube.

Content Note: This film is unrated but is generally safe for family viewing. There is one brief scene that hints at sexuality and mild violence.

Have you watched The Lady and the Highwayman, read the novel or seen any of her other film adaptations? If you have, what did you think? Comment below and let me know!

Our romance-themed entertainment site is on a mission to help you find the best period dramas, romance movies, TV shows, and books. Other topics include Jane Austen, Classic Hollywood, TV Couples, Fairy Tales, Romantic Living, Romanticism, and more. We’re damsels not in distress fighting for the all-new optimistic Romantic Revolution. Join us and subscribe. For more information, see our About, Old-Fashioned Romance 101, Modern Romanticism 101, and Romantic Living 101.
Pin this article to read later! And make sure to follow us on Pinterest.
By Naazneen Samsodien on April 27th, 2017