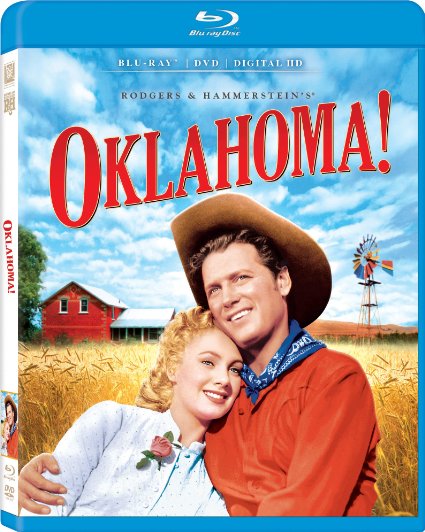 Sixty years ago a film was adapted from one of Rodgers and Hammerstein’s most treasured stage musicals and became one of the most classic and beloved movie musicals of all time. Oklahoma! features some of the catchiest tunes the musical duo ever wrote and is probably most famous for introducing Shirley Jones to the public.

This was her first high profile film and led her to an impressive award-winning career. The rest of the cast included popular musical stars Gordon MacRae and Gene Nelson and stage actress Charlotte Greenwood who were well-known in Hollywood and well established film stars.

Many film musicals begin with a powerful and memorable opening song number, and Oklahoma! managed to keep up this tradition with cowboy Curly’s, MacRae, mighty voice praising the beautiful morning while riding his horse through a cornfield. Curly has feelings for farm girl Laurey, who teases and insults the cowboy to hide her own feelings.

Curly wants to escort Laurey to a local farmer’s party, but before he can strike up the nerve she teases him about finding a suitable carriage to escort her in and a fight breaks out between the two. Laurey retaliates by accepting an invitation to the same party by her hired hand Jud, not knowing that he is secretly obsessed with her and has a shady past. Soon, she is caught in a love triangle and worries throughout the film about which man she should give her affections.

Meanwhile, Laurey’s friend Ado Annie has recently blossomed into an attractive young lady and is caught in her own love triangle. Annie promised cowboy Will that she would marry him if he could make a decent living which resulted in him leaving town for Kansas. While he is away, she is courted by several other men but takes a fancy to a peddler named Ali with a wandering eye and a great sales pitch.

In the midst of all the romantic dilemmas, the farmers and cowboys are waiting for Oklahoma to be made an official state and fighting over the fences being put up by the farmers on the cowboys’ land. Laurey’s wise and respected Aunt Eller soon puts a stop to their bickering and convinces them to be friends and work together to make the state prosperous. Aunt Eller also advises Laurey on matters of the heart and provides outrageous comedic dialogue.

The film was a success, took home many awards and it helped re-popularize movie musicals. Some changes were made to the movie, such as certain scenes being cut and a few songs were taken out to make more time for dance numbers.

The most famous was the dream ballet in which Laurey unable to choose a suitor dreams about what her life would be like with each of them. This includes “dream” versions of Laurey and Curly, or better known as stand-in dancers who enchant the audience with a beautiful performance which captures your attention until Laurey awakens enlightened but still unsure of her future.

While the songs and dance numbers are what make this film memorable and fun to watch, the acting and dialogue is a little corny, particularly Jones’ lines. Still, Shirley Jones does a great job considering this was her first film, and the other actors do a magnificent job at keeping your attention, especially the scenes featuring Aunt Eller, Annie, Will and scene stealer Ali the peddler.

This is a movie musical that will always entertain film lovers for its old fashioned settings to its wonderful music and a story that has something for everyone.

Our romance-themed entertainment site is on a mission to help you find the best period dramas, romance movies, TV shows, and books. Other topics include Jane Austen, Classic Hollywood, TV Couples, Fairy Tales, Romantic Living, Romanticism, and more. We’re damsels not in distress fighting for the all-new optimistic Romantic Revolution. Join us and subscribe. For more information, see our About, Old-Fashioned Romance 101, Modern Romanticism 101, and Romantic Living 101.
Pin this article to read later! And make sure to follow us on Pinterest.
By Julia McCracken on May 12th, 2015