When I first read about Table 19, I planned to see it in theaters. That didn’t pan out, but nonetheless, I watched for its DVD release. When the event arrived, I RSVP’d (and picked up a copy) hoping its story would be a comedic gem. What I came away with from Table 19 was something entirely different than I expected.

Eloise (Anna Kendrick) knows everything (the good and bad) there is to know about the Milner wedding. Yet she sits on her couch crying over the invite, deep in contemplation over the answer her RSVP card should say. Fast-forward a few weeks, and Eloise stands awkwardly at the entrance of the reception trying to work up the nerve to enter. A handsome and very British man observes her.  And then he speaks. When his words meant to encourage go unwelcome, the two strangers get into a sparring match…

You see, Eloise was once the maid of honor. This changed when Eloise and her boyfriend, Teddy (brother of the bride) broke up. Now instead of a place at a table of honor, Eloise is stuck at Table 19, the table of misfits and “conciliatory” invites.

What initially drew me to this film, I suspect, was Anna Kendrick as its star. Since her turn in the Pitch Perfect franchise and later in Into the Woods, I’ve been a fan. Seeing her take on something so different from either of those roles intrigued me. 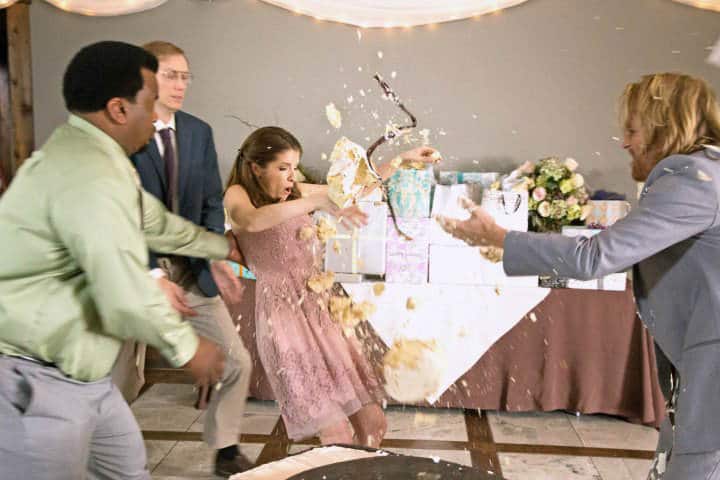 The story starts off “rough.” Not in a bad way… just unexpected. There’s a kind of hectic aura to its opening that makes us wonder what we’re in for. Is this going to be a fun comedy? Is this going to challenge the genre with darker undertones? Or perhaps it’s setting up a disjointed story without much purpose? The script winds up being a story of many things. It’ll make you laugh, inspire frustration and most assuredly, you’ll shed a tear or two.

With an ensemble cast (Lisa Kudrow, Craig Robinson, June Squibb), one never knows what sort of characters you might meet. Not only is the cast (mostly) suited (to their roles) and talented, these characters are fun, albeit terribly messed up. None of them are in a healthy place, which simply inspired me to root all the more for a resolution with a smile. If you enjoy quirky comedies (like Elizabethtown, Carrie Pilby or Not Another Happy Ending), this is sure to be your cup of tea.

Though categorized as a comedy, the deeper we settle into the story, revelations reveal otherwise. Serious issues (that kind that might cripple even the best person emotionally) begin to form. I appreciate and respect that about Table 19. The differences between it and its peers stack up; this one is more a character study than a melodrama. Nonetheless, there is still a healthy dose of wit as it unwraps the message. As the screen fades to black, we’re left believing that on one very unusual day, these misfit strangers walked away as better people.

Content Note: There are several instances of sexual humor and references (throughout the story). There’s some commonplace profanity including one use of the F-word; there’s a scene of drug use. Table 19 is rated PG-13.

Where to Watch: You can rent Table 19 on Netflix and Amazon Video, or purchase it on DVD.

Have you seen Table 19? Let me know your thoughts on the film!

Our romance-themed entertainment site is on a mission to help you find the best period dramas, romance movies, TV shows, and books. Other topics include Jane Austen, Classic Hollywood, TV Couples, Fairy Tales, Romantic Living, Romanticism, and more. We’re damsels not in distress fighting for the all-new optimistic Romantic Revolution. Join us and subscribe. For more information, see our About, Old-Fashioned Romance 101, Modern Romanticism 101, and Romantic Living 101.
Pin this article to read later! And make sure to follow us on Pinterest.
By Rissi JC on September 18th, 2017