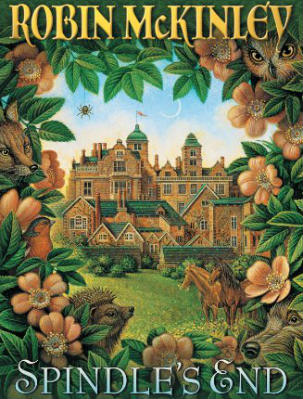 Based on the story of “Sleeping Beauty,” Spindle’s End follows two fairies, Katriona, and her Aunt, who live in Foggy Bottom, in a place called the Gig in a very magical kingdom.

When the King and Queen have a little girl, a fairy from each village is invited to attend the Christening and Katriona, or Kat, is selected from Foggy Bottom. An evil fairy, Pernicia, arrives at the Christening, cursing the young princess. Determined to save her, Kat kidnaps the baby princess and brings her to Foggy Bottom. Kat and Aunt raise the baby, now called Rosie, who has a few unexpected gifts. Keeping her hidden, Pernicia is still searching, looking to fulfill her curse and take her revenge on the royal family.

RELATED | YA Book Review: Beauty-A Classic Retelling of the Story of Beauty and the Beast

Things get complicated when Rosie meets Peony, a girl her own age who would be a much better princess. At the celebration for the princess’ 21st birthday, Rosie finds herself locked in an unexpected battle with Pernicia to save her family, her friends, and her kingdom.

Spindle’s End is a fun book because there are so many strong female characters, but they are all strong in different ways. Rosie, Kat, and Peony are all strong characters in different ways. All three (and the other characters) are relatable. They make mistakes and have consequences for those mistakes. They get tired, they cry, and they fall in love. Peony is more of a girly-girl, Rosie is more outdoorsy, and Kat is somewhere in between. McKinley doesn’t say that one is better than the others; they are all equally solid characters. The supporting characters are also great.

The leading men, Narl, Barder, and Rowland, are also interesting. Narl is a blacksmith with a secret and Rosie’s close friend, Barder is a wheelwright who loves and eventually marries Kat, and Rowland is the handsome prince. The three men are just as different as the ladies, and I appreciate that about Robin McKinley’s books.

The romances are varied. Kat and Barder have a relationship that is set up from the beginning of the book and, despite the challenges that they face, their relationship is laid out in a sweet way. Although we can’t see into Barder’s brain, it is clear that they are a couple to watch. Kat and Barder fit into each other’s lives, compromise for each other, and stick up for each other. If this was the only romance in the book, that would be fine.

The other romances fall into spoiler territory, but there are two more and they are equally sweet, though the first time I read the book, they both felt a little rushed. If you reread Spindle’s End, however, you can see the clues leading to each romance’s end result.

Robin McKinley writes her books by tightly weaving together details and careful world-building. The reader feels like they’re there, watching the story unfold, and the language that McKinley uses is rich and compelling. The world takes itself seriously, and so do we.

Spindle’s End is an exciting retelling of the “Sleeping Beauty” story. The princess has a much bigger role than princesses in fairy tales usually do. The story is tightly woven together. If you like other books by Robin McKinley, “Sleeping Beauty,” fairy tales, or fantasy books, you may really enjoy Spindle’s End.

Like with an adaptation of Beauty, if Robin McKinley wrote the screenplay this could be a magical film. The technology that we have today could bring the magical world of the Gig to life, and also show us the thrilling climax of the story in an exciting way. The setting is rich, the characters are fun, and the story is exciting.

For casting, I imagine Angel Coulby as Katriona, Andrew Garfield as Barder, Maggie Smith as Sigil, AnnaSophia Robb as Rosie, Eoin Macken as Narl, Dakota Fanning as Peony, Angela Bassett as Aunt, Thomas Brodie-Sangster as Rowland, and Tom Hiddleston as the voice of Zel.

CONTENT NOTE: There are some moments of peril but Spindle’s End is very wholesome.

Our romance-themed entertainment site is on a mission to help you find the best period dramas, romance movies, TV shows, and books. Other topics include Jane Austen, Classic Hollywood, TV Couples, Fairy Tales, Romantic Living, Romanticism, and more. We’re damsels not in distress fighting for the all-new optimistic Romantic Revolution. Join us and subscribe. For more information, see our About, Old-Fashioned Romance 101, Modern Romanticism 101, and Romantic Living 101.
Pin this article to read later! And make sure to follow us on Pinterest.
By Bailey Cavender on March 30th, 2017