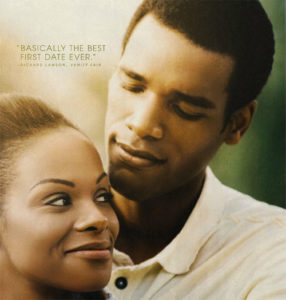 Southside with You is a romantic drama biopic, written and directed by Richard Tanne in his feature film directorial debut. The film envisions and recounts the first date of the recent American first couple, namely Barack Obama (played by Parker Sawyers) and Michelle Robinson (played by Tika Sumpter), on a hot summer day in Chicago in 1989.

Like the very pace of a hot summer day, the film languidly moves along, following two people and all the verbal jousting and parrying and showmanship and awkwardness that is a first date. It is all very Linklater-esque, reminiscent of filmmaker Richard Linklater’s classic Before trilogy – Before Sunrise (1995), Before Sunset (2004) and Before Midnight (2013) – where two people simply wander and converse. If these types of movies appeal to you, then Southside with You is probably a good fit. Although, the fact that the two wandering and conversing people are “known,” are depicting an au courant couple as internationally recognized and politically polarizing as the Obamas, does create a rather dynamic viewing tension. But I’m getting ahead of myself here.

A Date that is Not a Date

Southside with You opens with a man and a woman, each in their respective abode, getting ready to go out. Michelle keeps insisting, first to her parents and later to Barack, that this is NOT a date. This is two colleagues going to a community meeting together. Although Barack has picked her up rather early for the meeting, so now there is time to drop by an art exhibit and eat a sandwich in the park and share some life stories. 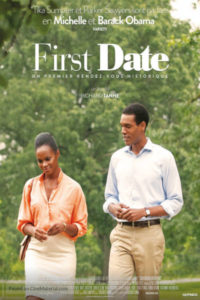 The film starts in medias res, meaning that, as viewers, we are thrust into a narrative that is already ongoing. Barack and Michelle already know each other. There is already a history there. And there are discussions about work, which we, as the viewers, can’t initially follow. Barack and Michelle work together. He is a summer associate at her law firm, where she is his supervisor. Her repeated assertions that this is NOT a date are based on this working relationship and on the dynamics of their workplace, where she – as a woman of color – is a decided minority.

So, the whole set-up is that Barack is smitten with this woman, who is just not giving him the time of day. This “date” is his chance to convince Michelle to take a look at him personally, to give him a chance, to get her to put her guard down and let him in. And so they walk and talk and drive and talk and grate on each other at times and challenge one another, and Barack smokes a lot of cigarettes and smooth talks, and they eventually make it to the community meeting. Here, there is a glimpse of the gifted orator that is to become the future Senator and President. They walk and talk some more, end up out for drinks and then a movie and end it all with ice cream and a kiss. We know how it all plays out 20 odd years later.

There is no thematic tension in the film – no will they or won’t they?! We know they do. We know Michelle Robinson and Barack Obama fall in love, get married, have two daughters and on it goes. So the tension in the film is created through the very act of viewing. How does this version of a young Barack and a young Michelle jibe with your own sense of who they are, with your own “knowledge” and “understanding” of the Obamas?

The film is inevitably colored by one’s current opinions (whatever they may be) regarding the Obamas. So it could be propagandist schlock, rose-tinted hagiography, black empowerment, a simple love story – all dependent upon your starting point. Is Michelle too snarky or a confident woman who knows what she wants? Is Barack a snake oil salesman or a gifted, earnest idealist? Yeah, it just seems like the subject matter is so politically raw at the moment, that the actual gentle love story gets lost. 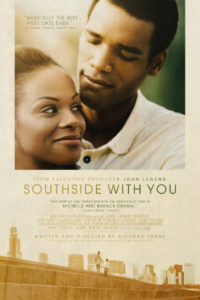 I found myself wondering if there was a story here other than the Obamas. Is the love story compelling enough to be anonymous, without it being the Obamas´ story? Can it stand alone? And honestly, I don’t know the answer to that, because it is the Obamas’ story, or rather, Tanne’s interpretative portrayal of it. I can’t separate it – the story – from them – the Obamas.

I waffled with this film, back and forth between enjoying it and being annoyed by it. Saccharine at times, stilted at others, smart and witty and just right as well – I just don’t know. I still don’t know. And yet the film has stuck with me after seeing it, but not necessarily for the tale itself, but for the very act of mediation. Southside with You is ultimately a rumination on the act of viewing and assuming ownership and intimacy and knowledge of public figures. It is a meta-narrative inspection of the narratives we tell about folks we truly do not know.

It’s a challenging film, intellectually engaging, and I’m sure it’s being dissected in many a college course…

Where to Watch: Southside with You is available on DVD and for streaming through Amazon Video and Netflix.

Content Note: Rated PG-13 for brief strong language (a couple f-bombs are dropped), smoking (the young Barack is a chain-smoker), a brief violent image from Spike Lee’s Do the Right Thing and a discussion about marijuana.

Our romance-themed entertainment site is on a mission to help you find the best period dramas, romance movies, TV shows, and books. Other topics include Jane Austen, Classic Hollywood, TV Couples, Fairy Tales, Romantic Living, Romanticism, and more. We’re damsels not in distress fighting for the all-new optimistic Romantic Revolution. Join us and subscribe. For more information, see our About, Old-Fashioned Romance 101, Modern Romanticism 101, and Romantic Living 101.
Pin this article to read later! And make sure to follow us on Pinterest.
By Jessica Jørgensen on June 23rd, 2017