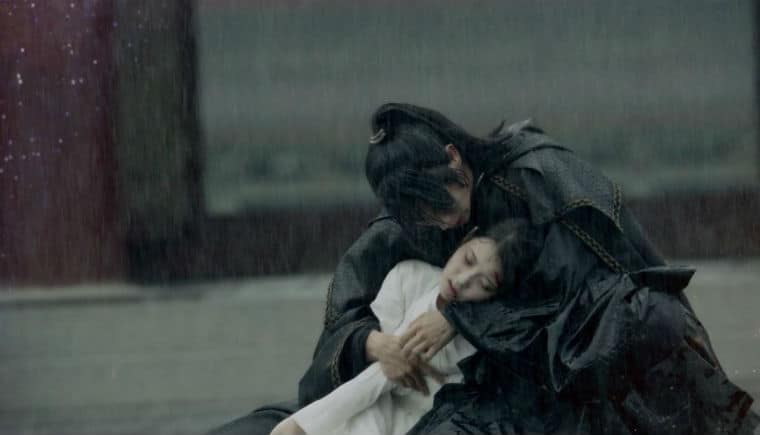 THE ROMANTIC MOMENT: 4th Prince Wang So shields Hae-Soo from the rain while she pleads for her mentor’s life.

The romantic period drama/time travel series, Scarlet Heart: Ryeo, has already (and unfortunately) ended on DramaFever awhile back. I know I’m not the only one hoping for a second season just so 4th Prince can find Hae-Soo in the present day! I feel totally robbed by the tragic ending…. That being said, the show had SO many wonderful romantic moments sprinkled throughout all the episodes between 4th Prince and Hae-Soo that I wanted to briefly return to my personal favorite moment from the series (and perhaps convert a few newbies to check out this epic love story in the meantime).

The Lead In – 4th Prince and Hae-Soo

For those who are like: what is this time travel romance series that I have never heard of? Allow me to enlighten you. You can thank me later! Scarlet Heart: Ryeo, a Korean adaptation of a Chinese novel, tells the story of a 21st-century woman who travels back in time to the dangerous era of the 10th century where the ruling Wang family fight for the throne. Entwined in the lives of several princes and room for only one in power, Hae-Soo gets caught up in political intrigue and romance.

RELATED | ROMANTIC MOMENT OF THE WEEK: GOBLIN – A BIRTHDAY WISH

First, she falls for the kind hearted but married 8th Prince Wang-Wook. However, after she gets betrayed by his growing lust for power, she turns to the 4th Prince Wang So, the scarred prince everyone calls wolf dog because of his harsh past and fierceness. The growing love between these two begins to play out in Beauty and the Beast style (I admit to being rather disappointed when Wang So started covering his scar with makeup). She can see the good in him even if others can’t. In return for her kindness, Wang So loves her passionately and will do anything for her.

As mistrust begins to build in the palace, an assassination attempt is made on the Crown Prince. 4th Prince uncovers the conspiracy and aims to stop it when he realizes Hae-Soo is being used as an unaware scapegoat to poison his brother, the Crown Prince. Preventing what he believes would be her death, he takes the poison himself (having built up a slight immunity over the years). He attempts to make an escape before the poison takes effect but he is too late and everyone realizes there was an assassination attempt. Hae-Soo gets blamed and imprisoned for treason. She’s also intensely tortured.

After healing, 4th Prince Wang So still attempts to save the woman he loves only to discover someone else already has. Court Lady Oh, who thinks of Hae-Soo as a daughter, confesses to the assassination plot. Even though she too is innocent, this selfless woman puts herself on the execution block. It’s really a powerful moment of selflessness.

But Hae-Soo doesn’t want her mentor to die. She pleads on her bruised and tortured body’s knees in front of the King’s abode to save the innocent Court Lady Oh. But to no avail. No one else will stand with Hae-So. Everyone fears the King’s wrath.

As days go by, Hae-Soo still doesn’t move.  Touched by her bravery, a few of the princes briefly join her in the rain. But the 8th Prince, who supposedly loves her, hesitates and backs off into the shadows. He chose his guilty family over the woman he loves.

Rejected and alone, 4th Prince walks up behind Hae-Soo and shields her from the rain with his black cloak. Without a word, 4th Prince Wang So stands by her side in solidarity. He loves her selflessly, unafraid of the wrath of the King. This moment works in great contrast to the weaker love of the 8th Prince who just keeps walking. 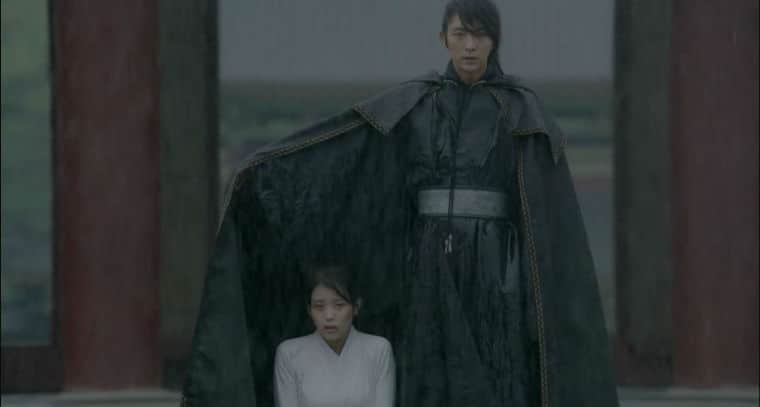 While Hae-Soo and 4th Prince continue to stand in the rain, Court Lady Oh gets executed. Hae-Soo’s pleas were for nothing even though the King himself was madly in love with Court Lady Oh and knew she was innocent. I have to say that her execution was one of the most tragic and touching moments of the entire series. 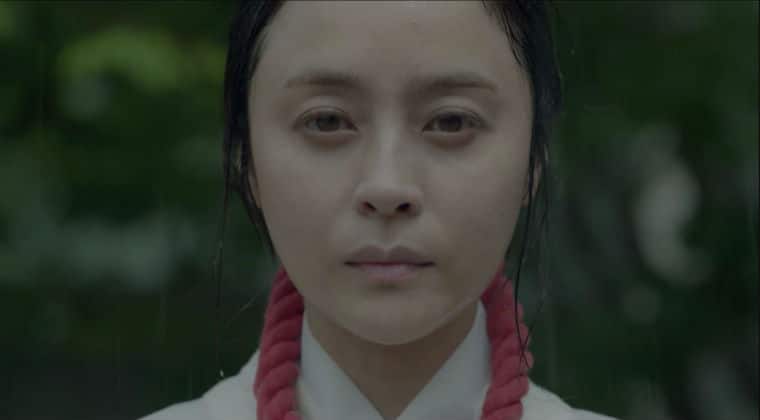 Hearing her death, Hae-Soo collapses to the ground and cries for her mentor, the woman who had become like her mother. 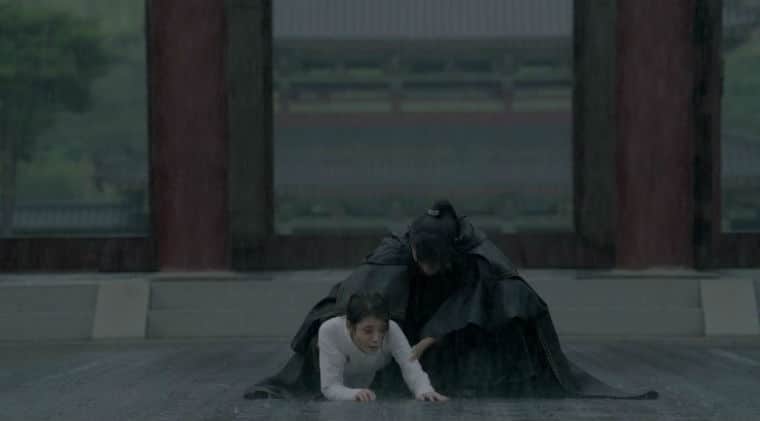 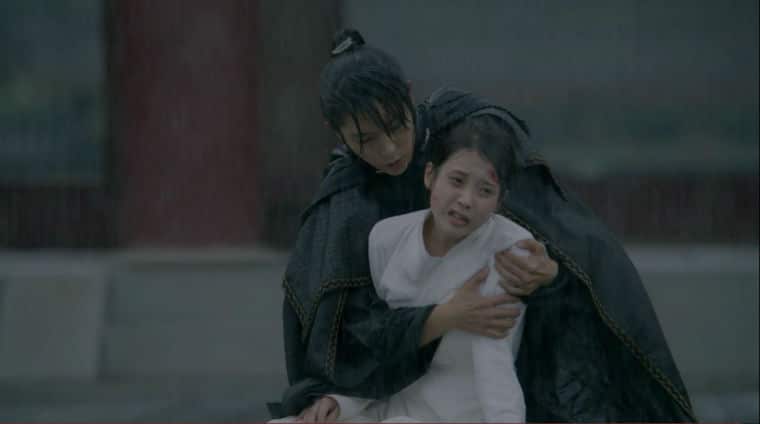 4th Prince just holds her in his arms, comforting her from both the rain and from the tragic pain. The epic nature of this scene will make you cry and fall in love with the beautiful romance between 4th Prince and Hae-Soo. 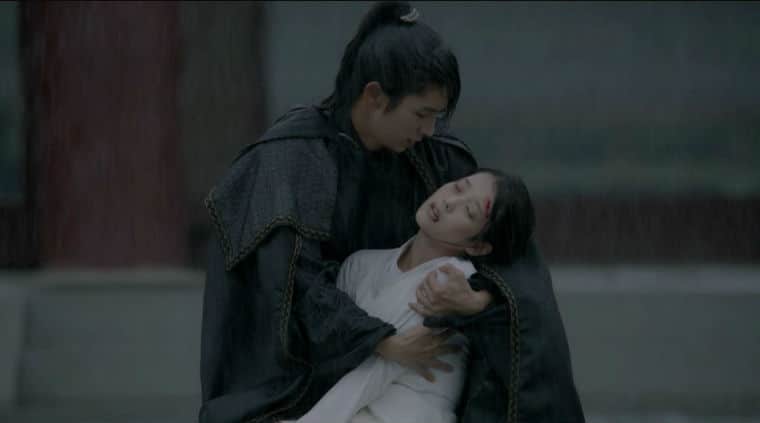 If you haven’t seen Scarlet Heart: Ryeo yet, the Director’s Cut (fixes the first couple of episodes) is now available on Dramafever.

What do you think about Scarlet Heart: Ryeo and 4th Prince and Hae-Soo? Sound off below…

Our romance-themed entertainment site is on a mission to help you find the best period dramas, romance movies, TV shows, and books. Other topics include Jane Austen, Classic Hollywood, TV Couples, Fairy Tales, Romantic Living, Romanticism, and more. We’re damsels not in distress fighting for the all-new optimistic Romantic Revolution. Join us and subscribe. For more information, see our About, Old-Fashioned Romance 101, Modern Romanticism 101, and Romantic Living 101.
Pin this article to read later! And make sure to follow us on Pinterest.
By Autumn Topping on March 4th, 2017

6 thoughts on “Romantic Moment of the Week – 4th Prince and Hae-Soo From Scarlet Heart : Ryeo”