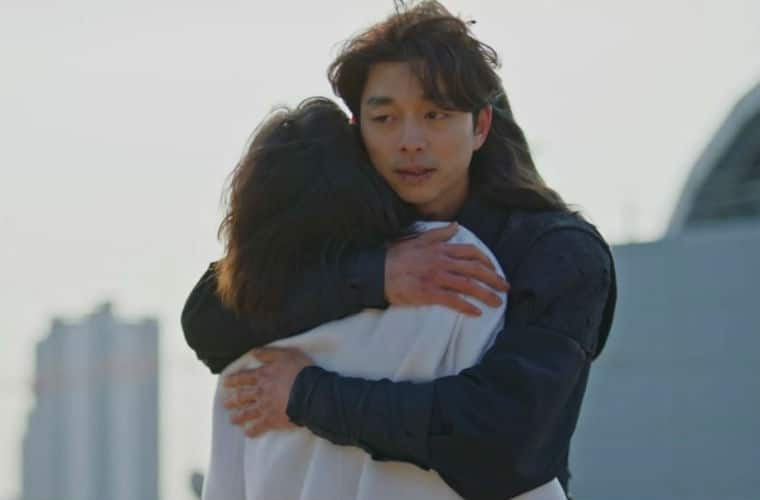 THE SHOW: Goblin: The Lonely and Great God

THE ROMANTIC MOMENT: After turning to dust, Kim Shin returns from death when Eun-tak makes a birthday wish.

If you watched Goblin, then you know the entire premise revolves around an immortal goblin in search of his bride. When he finds the Goblin’s bride, she’ll be able to pull the sword from his chest (this is part of his curse) and turn him to dust – therefore ending his long immortal life.

RELATED Goblin: The Lonely and Great God – This May Be The Best Show You’ll Watch All Year

In present day, Kim Shin (the goblin) meets Ji Eun-tak, an 18-year-old girl (19 in Korean years), a young orphan who can see ghosts. She also claims to be his future bride. They soon get to know each other and begin to fall in love. But now that he has a reason to live, he no longer wants to die.

Conflicts, of course, arise when they discover that if she doesn’t remove the sword – she’ll likely die instead. The two avoid their fates for as long as possible to be together – that is until Kim Shin’s old nemesis Park Joon-hun enters the picture. Now a vengeful ghost, they need to work together to defeat him. But the only way to defeat him is with the Goblin’s sword. Ah, the conundrum!

THE BUILD UP – GOBLIN

Park Joong-hun has a plan of his own, however, that forever changes their plans and fate. He possesses Ji Eun-tak so he can kill Kim Shin. Thankfully, Wang Yeo (the grim reaper and friend of Kim Shin and Eun-tak) shows up to help. With his reaper powers, he separates Park Joon-hun from Eun-tak. However, they don’t have long to defeat Joon-hun. So Kim Shin does the only thing he can. With Eun-tak still unconscious from the possession, he holds her hand over the sword and pulls it out – full on knowing that this means his death. But he makes this choice to save Eun-tak as well as to stop the villainous and evil Park Joong-hun.

Kim Shin quickly defeats Park Joong-hun and tells Wang Yeo that he has finally died a heroic death. Eun-tak awakens to find the aftermath and cries out in horror. Kim Shin has begun to turn to dust – thankfully very slowly so they can say their goodbyes. 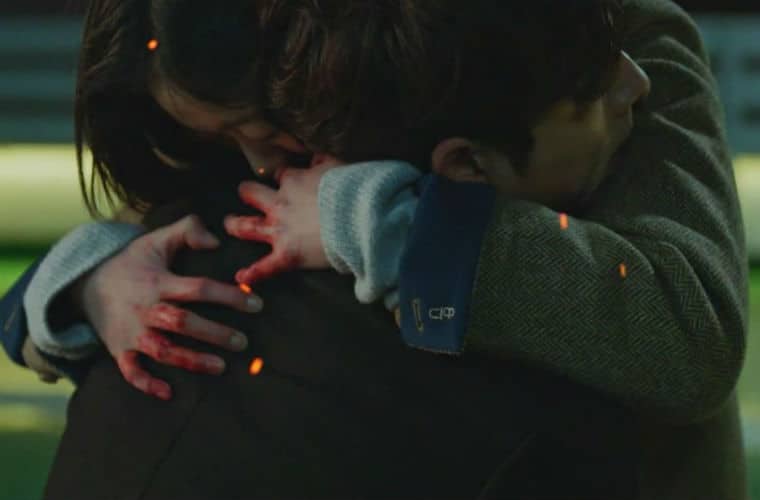 She runs over to hug him as she cries. He hugs her back, the sadness overwhelming both of them. Kim Shin pulls away and gently touches her face. 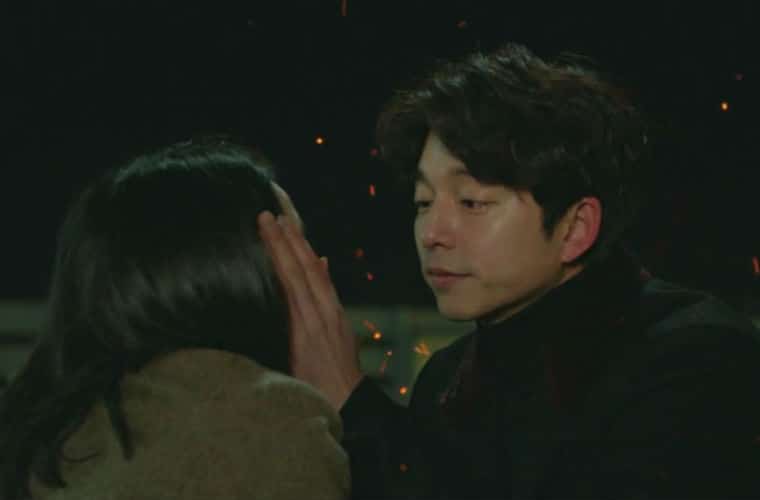 “My life must have been a reward…because I met you,” he tells her.

“No. Please!” She cries out. “You said that you wouldn’t let go of my hand. You promised me!”

“I’ll try asking God,” he says comfortingly,”to let me return with the first snowfall of the season.”

But Ji Eun-take is not comforted. She cries out, pleading for him not to leave her. All the while the red particles of dust surrounding him continue to grow.

“How am I supposed to live without you?” she asks him.

She tells him that she loves him.

“I love you, too. Until the very end,” he says. They stare into each other’s eyes for their final moments together. 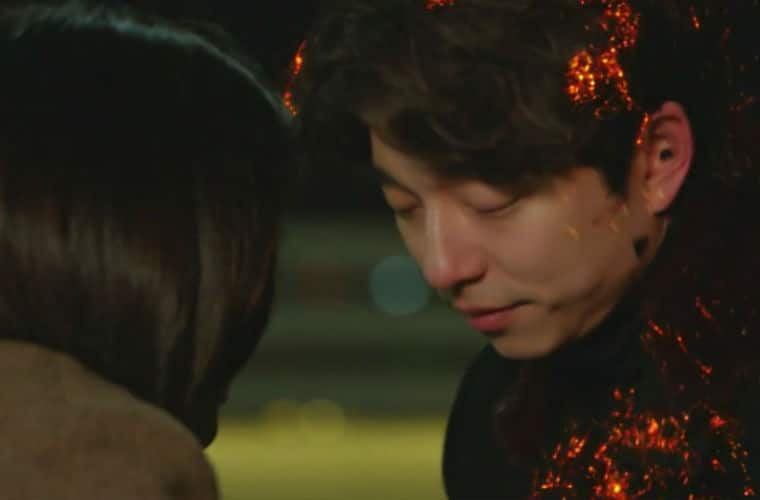 And then he turns to dust, leaving Eun-tak behind. She cries hysterically on the ground. But then soon realizes the gods are beginning to erase her memories of him.

As quickly as she can, she rushes over to write in her notebook. She writes his name with a reminder to remember him and his sad smile. And then, just like that, her memories of Kim Shin are gone.

About ten years passes, leaving both characters in a limbo of sorts. Kim Shin is stuck in a deserted land where “God” can’t even go – somewhere between heaven and earth. While Eun-tak lives on without her memories. Still, she knows she’s forgotten Kim Shin because she wrote his name in her notebook. She longs to remember him and his sad smile. She goes through life as if in a haze – depressed and half alive without fully knowing why. Alone at night, she cries herself to sleep. 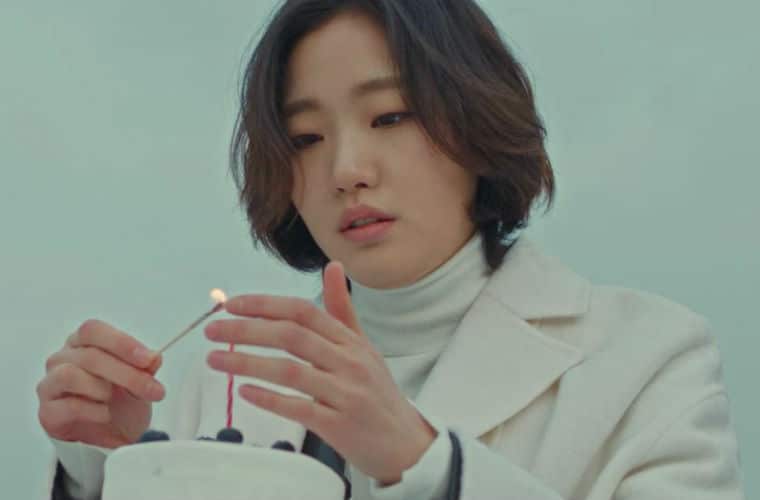 On Eun-tak’s 29th birthday, she sits alone on the roof of the place she works with a small cake and a single candle.

“Why is it that the only thing that remains is this deep-seated sadness? Who is the one that is cursed? Please…save me from this curse that is plaguing me?” Eun-tak wishes as she blows out her candle.

It’s this thought and soul connection (Jane Eyre like) to Kim Shin that is able to return him to the world of the living. It also seems her ability to make him appear when she thinks of him and blows out fire still works. Even beyond death. 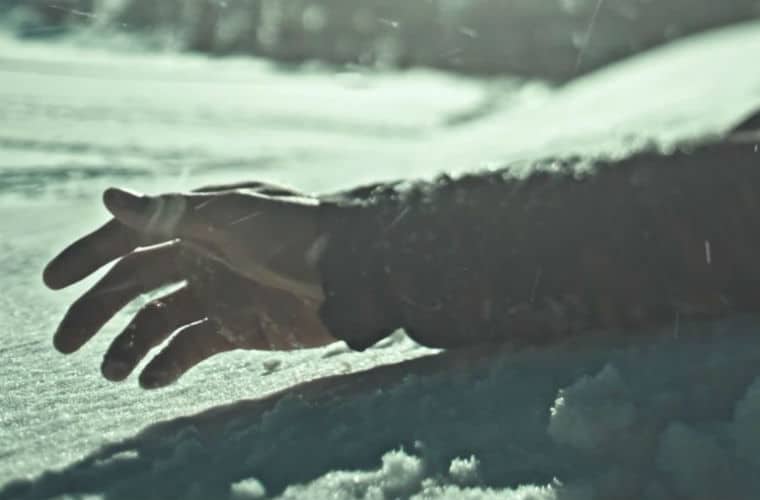 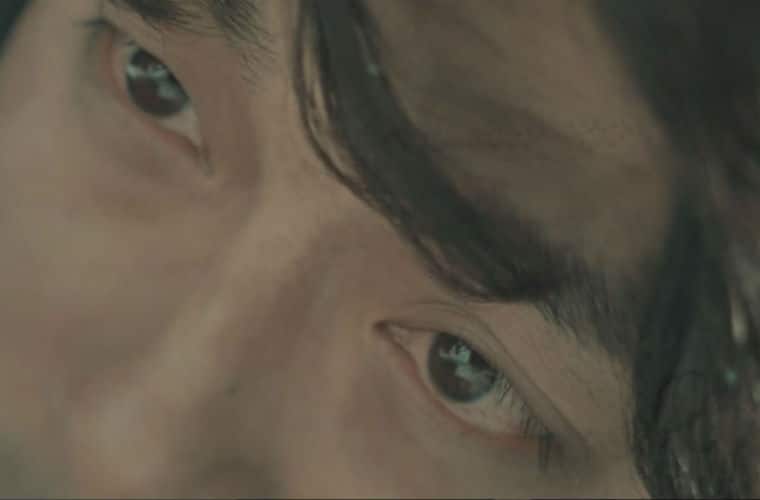 And thus, with her birthday wish, he disappears from the cursed land and returns to her side dressed in his full warrior clothes from the past.

She turns to see this strange (and very handsome) man standing before her. 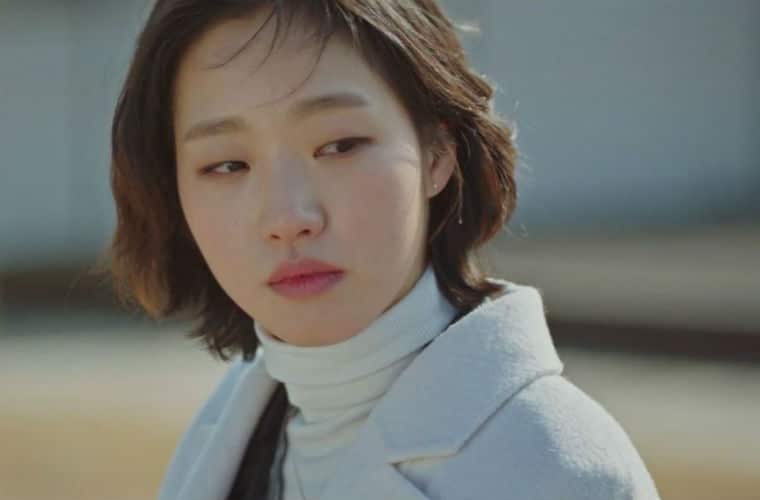 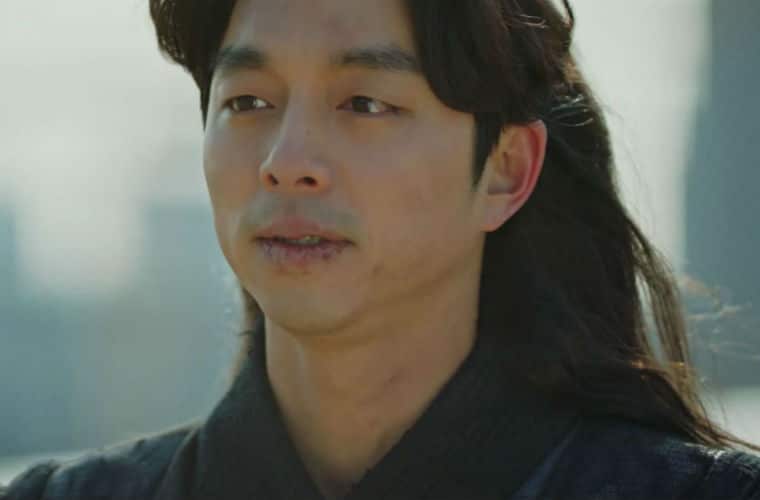 He looks at her, emotion, sadness and joy written across his face. The two exchange emotional glances. His one of longing; hers one of confusion and sadness.

Kim Shin hurries over to her and pulls her in for a hug. 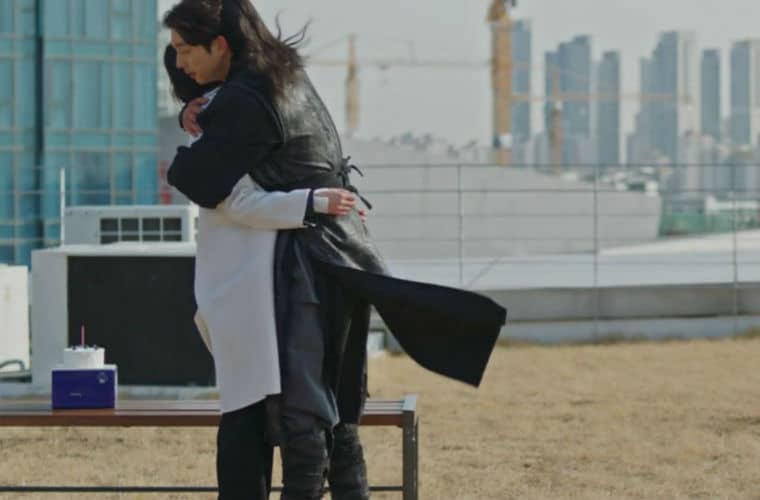 She returns the hug, not sure why she feels so much emotion for this stranger. The two cry as they cling to each other. 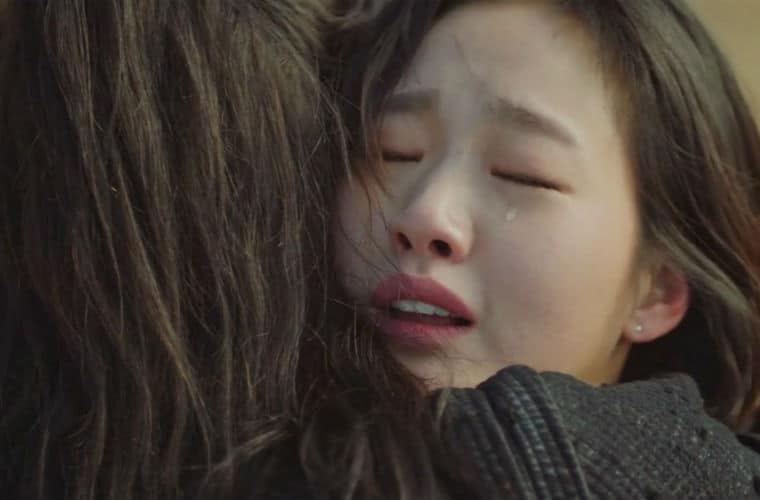 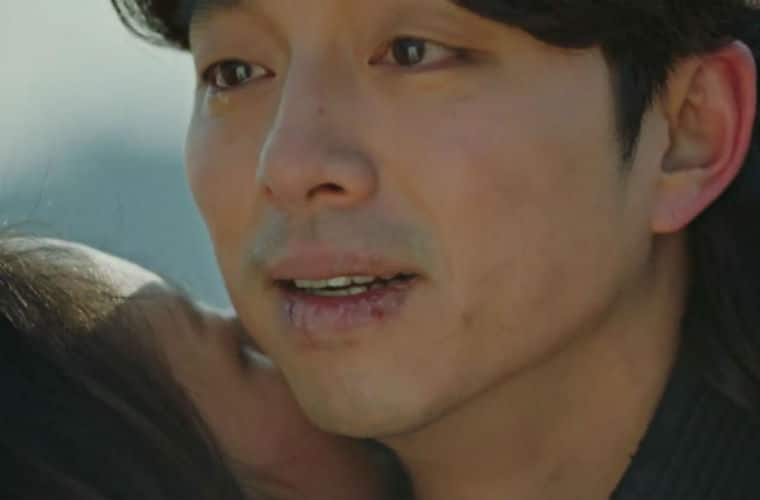 However, she pulls away after a few moments as she realizes she’s hugging and crying over a man she’s never met before. She apologizes for being emotional – and then wonders why she’s apologizing to this strange man when it was him who hugged her.

Before she leaves this “stranger,” she turns to ask him how he actually got there on the roof. 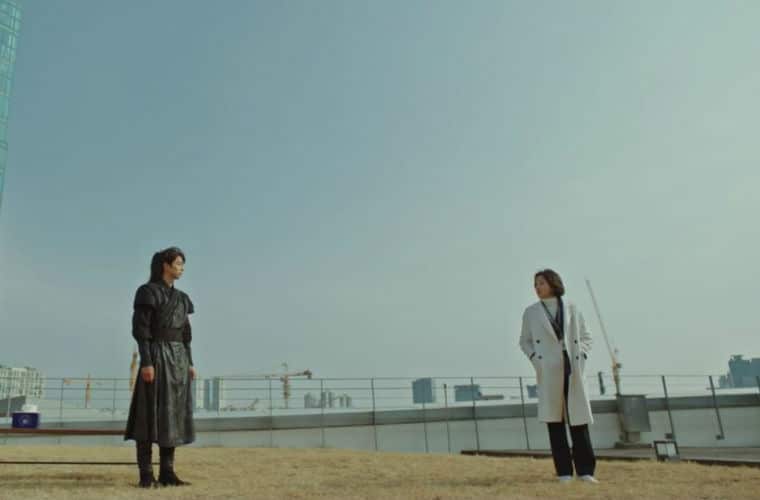 “Someone summoned me,” Kim Shin tells her.

And with that, Eun-tak walks away leaving Kim Shin alone on the roof. Of course, Eun-tak eventually gets her memories back and the two have a happy reunion. There were also quite a few twists left in their love story by the end! But I chose this moment because it was all about their love and soul connection and how even death couldn’t stop them from finding a way to be together again. It was a beautiful moment.

If you haven’t watched Goblin yet, you can watch the entire drama on Dramafever.

Did you watch Goblin? Were you happy with how Kim Shin returned? Let me know in the comments!

Our romance-themed entertainment site is on a mission to help you find the best period dramas, romance movies, TV shows, and books. Other topics include Jane Austen, Classic Hollywood, TV Couples, Fairy Tales, Romantic Living, Romanticism, and more. We’re damsels not in distress fighting for the all-new optimistic Romantic Revolution. Join us and subscribe. For more information, see our About, Old-Fashioned Romance 101, Modern Romanticism 101, and Romantic Living 101.
Pin this article to read later! And make sure to follow us on Pinterest.
By Amber Topping on January 30th, 2017