THE MOMENT: Lucy and Wyatt share an unexpected kiss.

Although never having met one another before their hastily assembled first mission, Lucy, Rufus and Wyatt quickly find themselves bonding. As they face one history-altering situation after another, they learn to trust, drop their guards, reveal, be vulnerable, be truthful, forgive. All harbor heartaches, doubts, fears, longings.

RELATED: TIMELESS: A TIMELESS TREAT OF A TV SERIES THAT YOU SHOULD BE WATCHING

Lucy’s sister was erased from the present timeline after their very first mission. She simply ceased to exist, and no one remembers her, misses her, other than heartbroken Lucy. Wyatt is still in love with his dead wife, haunted by his own inactions/actions, which helped to precipitate her meaningless demise years prior. He is a grieving widower, never laying his loss to rest. It consumes him. Empath Lucy feels his pain and grief acutely and has an innate desire to succor. Such is her nature.

But now he’s got a time machine at his disposal, so maybe, just maybe, Wyatt can right the wrongful death of his wife, Jessica. That is his greatest desire. That he will come back from a mission to a timeline where his wife awaits him. Yet, a deep bond of friendship develops between Lucy and Wyatt. And maybe something a little bit more, if either of them is willing to admit it.

THE LEAD-IN – LUCY AND WYATT

After her sister’s disappearance from the present, Lucy also came home to a fiancé, a man she does not know nor love. “Every time I reach for you, you pull away…It’s like you came home one day, and you were a totally different person,” her fiancé Noah tells her at the dinner table. A strange man loves her, and Lucy – feeling Noah’s connection and concern for her, his own pain at her apparent rejection – is trying to give him a chance. If their love was fated in one timeline, is it not true across all as well? She wears his ring and keeps up the front of her engagement, plagued by guilt and doubts.

“Still wearing the engagement ring of a guy you don’t know?” Wyatt queries, as he and Lucy prep for their next mission, a hop to May 22, 1934, Arkansas. Flynn’s apparently after a key, possibly connected to a bank. Lucy tells Wyatt of her date, of her thoughts on love and fate, that in an alternate timeline, she apparently loves Noah.

“Do you feel that way about him in the here and now?” Wyatt asks. Lucy can only answer in the negative. “You’re not supposed to be engaged. Hell, you shouldn’t even have met this Noah guy. So, you should let him be with who he’s supposed to be with,” Wyatt continues. Lucy sighs.

And then they’re off on their mission, standing in an Arkansas bank on May 22, 1934, when who should bust in, but none other than Bonnie and Clyde. Bonnie’s got a golden key on a chain around her neck. Wyatt and Lucy know then and there that they have to get to Bonnie and that key before Flynn. So, they aid Bonnie and Clyde in their bullet-riddled escape from the bank, pretending themselves to be bank robbers.

THE ROMANTIC MOMENT – LUCY AND WYATT

Back at Bonnie and Clyde’s hideout, after the successful evasion of the law, they get to socializing, trying to figure out the importance of this key around Bonnie’s neck. Wyatt and Lucy have to keep up a pretense that they are a couple, a loving, criminal couple, not unlike Bonnie and Clyde.

Sitting at the kitchen table, drinking, Bonnie and Clyde share their moving, if dangerously psychotic, love story. Lucy is visibly moved by the intensity of their love for one another, whispering to herself, “It’s even better than I read about,” which gets an eye-rolling look from Wyatt.

After telling their tale – with many physical displays of affection – Bonnie looks across the table to Lucy and Wyatt and asks how Wyatt proposed. Bonnie and Clyde’s eyes are on them, waiting expectantly for a tale of love and romance.

Lucy flounders, having forgotten the engagement ring on her finger. She stutters a few beginnings, struggling to come up with a story on the spot when Wyatt leaps in with a tale. It’s a beautiful, moving, romantic story of how he proposed. And Lucy recognizes from the get-go that this is no fictive story. Wyatt is retelling the story of his proposal to his beloved Jessica. He turns to Lucy, tears welling in both of their eyes, after his recounting and says, “Do you remember that, honey?”

Lucy nods, “Yes,” visibly moved by Wyatt’s story. And as Bonnie and Clyde sit across from them, always touching each other, Bonnie on Clyde’s lap, Wyatt suddenly moves in for a kiss, planting one on a surprised Lucy. The kiss is rather convincing, lingering. Lucy moves her hand to Wyatt’s cheek. Bonnie and Clyde smile knowingly and approvingly.

In the intimate aftermath, as their lips release and they part, you can see the tender confusion in both Wyatt and Lucy’s eyes. Something has just happened here. Some real spark was just ignited during this act. 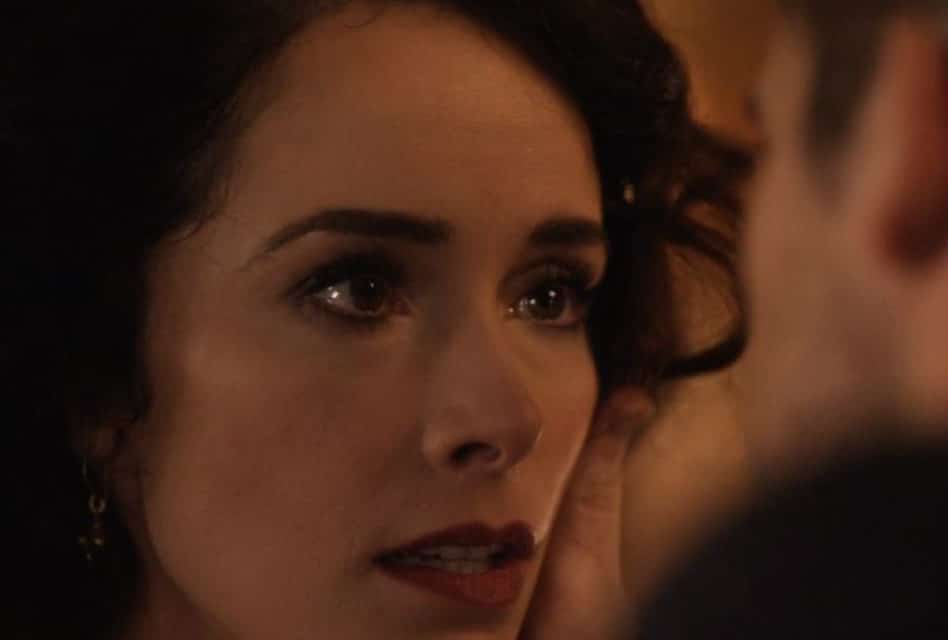 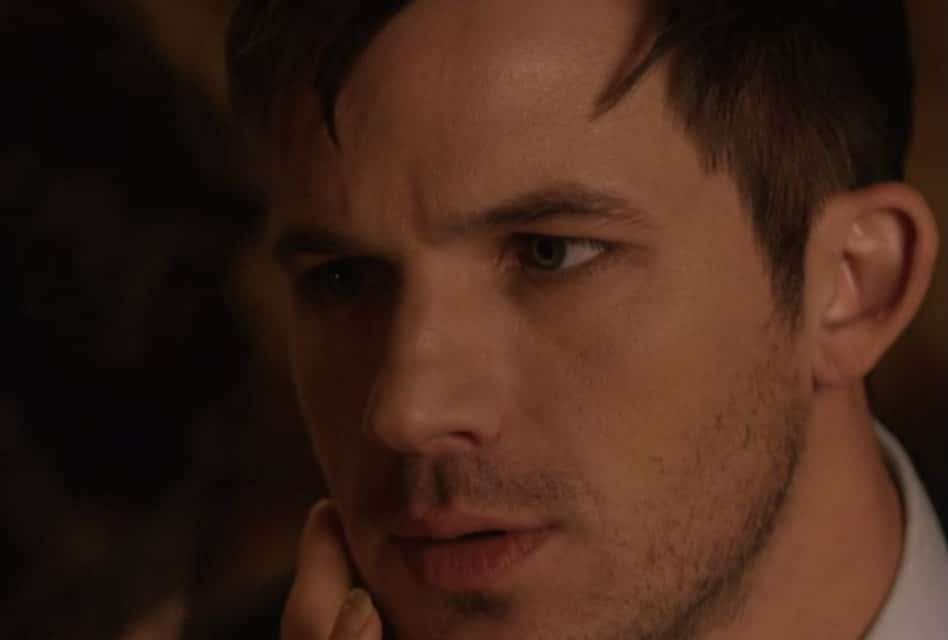 And the sudden kiss also instigates an increased intimacy during their whole sojourn with Bonnie and Clyde. Lucy and Wyatt cuddle on a couch and later find themselves in a bed together. Laying there, side by side, chastely close, they have a whispered conversation about love, about only one’s and meant to be’s, about fated love and second chances.

Lucy: I’ve seen attraction and chemistry, but no lightning bolts from the heavens. Nothing like that.

Wyatt: I’ve seen it. It happened to me.

Lucy: If there’s only one person for you in the whole world, and you lose them, does that mean that you have to live the rest of your life without anyone else? I think, you, we, anyone, has to be open to possibilities.

The intimacy of the exchange and the earnest, slight reveal of Lucy’s own burgeoning feelings, is quickly interrupted by the pragmatic objectives of the mission. Later, they will dismiss the kiss as just playing the part, but we all saw the very real chemistry. Lucy and Wyatt felt it themselves, felt the possibility, and it frightens and confuses them both immensely.

Where to Watch: After being canceled after season one in 2017, Timeless was surprisingly and thankfully renewed for a second season, which will air spring-summer 2018. Until then, you can buy season one on Amazon or on DVD. The last five episodes are also available to stream on Hulu. On nbc.com, the first episode and last five episodes can be streamed as well. And for those who are lucky, you can binge Timeless in its entirety on Netflix UK.

Did you watch the first season of Timeless? What are your thoughts on a possible romance between Lucy and Wyatt?

Our romance-themed entertainment site is on a mission to help you find the best period dramas, romance movies, TV shows, and books. Other topics include Jane Austen, Classic Hollywood, TV Couples, Fairy Tales, Romantic Living, Romanticism, and more. We’re damsels not in distress fighting for the all-new optimistic Romantic Revolution. Join us and subscribe. For more information, see our About, Old-Fashioned Romance 101, Modern Romanticism 101, and Romantic Living 101.
By Jessica Jørgensen on January 13th, 2018