THE FILM: Pride and Prejudice and Zombies

Of all the reincarnations of Jane Austen’s classic love story Pride and Prejudice, perhaps there’s none as creative as that of the literary mash-up Pride and Prejudice and Zombies. Based on the novel (of the same name) authored by Seth Grahame-Smith, and also bearing the name, Jane Austen, today’s romantic moment is from the recently released to DVD film adaptation, which I must confess I wound up adoring.

From here on out, be warned, there will be lots of SPOILERS.

This Lizzy Bennet and Darcy pairing are on an even more equal ground than Austen’s classic pits them. There they are matched wit for wit, but here they are equal to one another in their weaponry skills as experts. Their romance is comprised of beginnings that are much the same as Austen’s original, at a ball. It’s there that their eyes first lock and an instant spark of curiosity is born.

Following this, there are unexpected meetings in society, a (literal) sparring proposal, and an eloquent letter in which Darcy says the following:

“Of all weapons in the world, I now know love to be the most dangerous. For I have suffered a mortal wound. When did I fall so deeply under your spell, Ms. Bennet? I cannot fix the hour or the spot or the look or the words which lay the foundation. I was in the middle before I knew I began.”

RELATED | Pride and Prejudice and Zombies Film Review: Everything You Could Ever Want

These words alone might very well be the moment that changed Lizzy’s mind. (I know it did mine!)

As time passes, they part but eventually, they meet again where they end up side-by-side fighting the undead. Somehow, through it all, Lizzy’s feelings slowly melt for Darcy. So much so that during the epic climax (during which, Lizzy and Darcy are being chased by hordes of zombies), when Lizzy believes Darcy to have died, she confesses the truth. 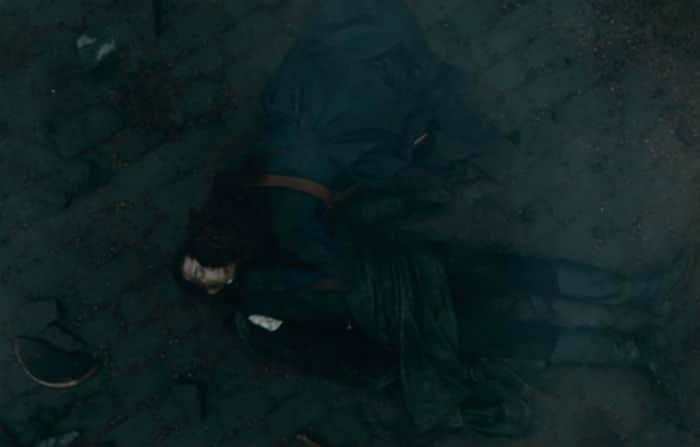 Seeing him lying on the ground, unmoving, she slowly (suffering an injury herself) makes her way over to his prone body where she hunches, weeping over him, and whispers, “The very first moment I beheld you, my heart was irrevocably gone.” Leaning down, she places a kiss on his lips.

As the camera pans out to encompass the destruction surrounding Lizzy lying over Darcy, we then transition into today’s romantic moment.

The Bennet women are sitting in Lady Catherine De Bough’s grand hall cleaning their weapons (because, naturally, that’s what ladies of society do) when in strides Mr. Bingley requesting an audience with Miss Jane Bennet. At this point, there has yet to be a sighting of Darcy. Lizzy looking fully recovered watches Jane leave with Bingley. This departure then admits the arrivals of Colonel Darcy much to the subtle pleasure of Lizzy Bennet. 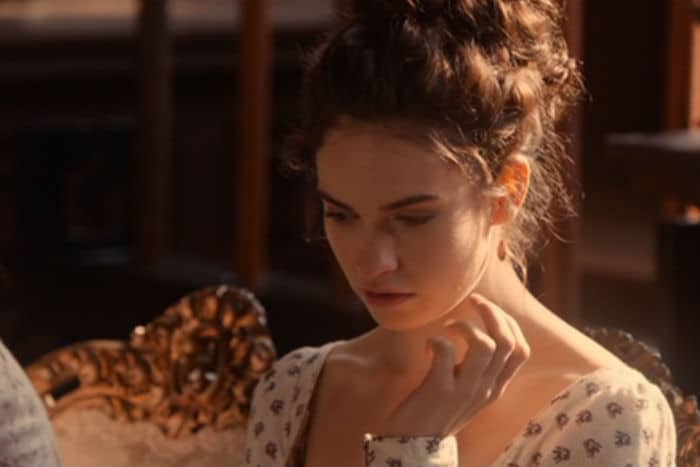 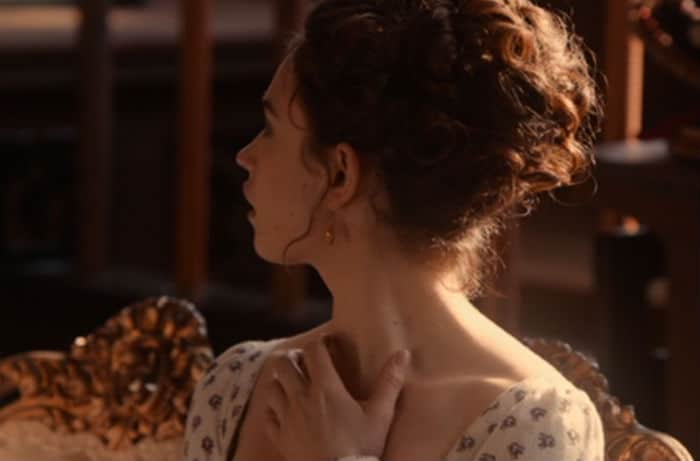 Walking into the room with his usual purpose and air of nobility, Darcy too looks fully recovered as his aunt asks after his health. Their pleasantries are soon interrupted by a squeal of pleasure from Jane, which confirms that Bingley has finally proposed marriage, and earns a small, rare smile of pleasure from Darcy. 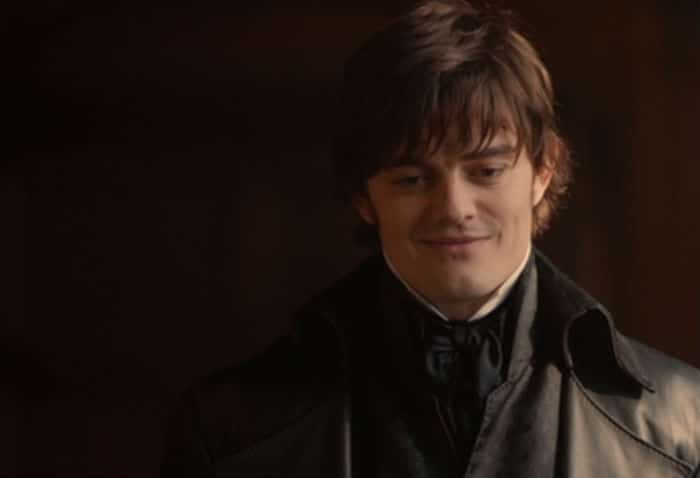 Everyone rises and makes to enter the next room, presumably to celebrate with the happy couple. Darcy stands aside to make way for the ladies as Lizzy brings up the end of the line where Darcy halts her. 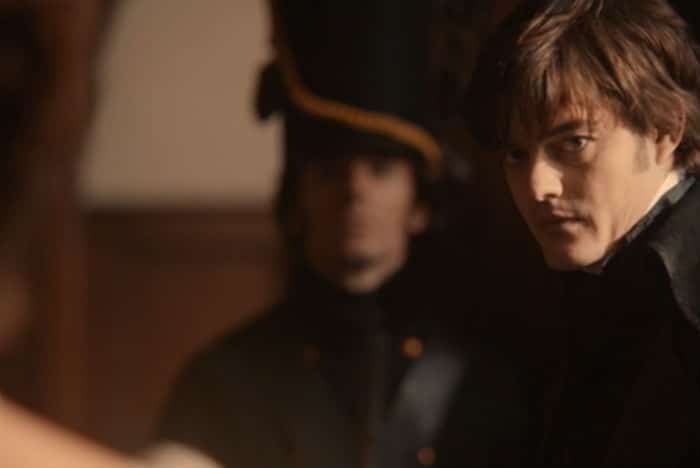 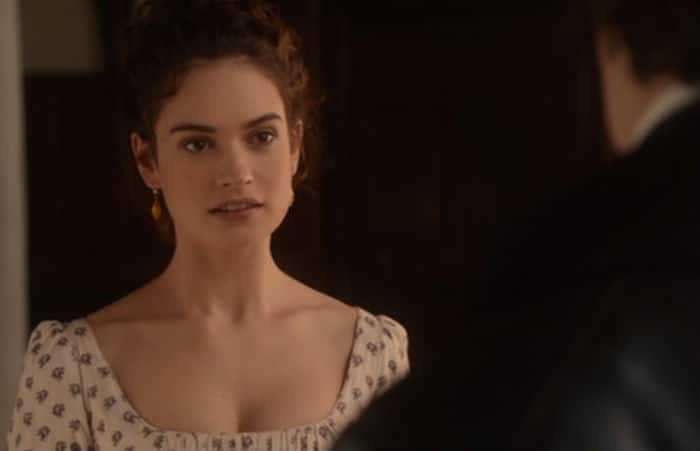 They exchange words of politeness. Darcy credits her with his being alive by saying, “If it wasn’t for you I’d of surely perished. You have saved me in more ways than one.” 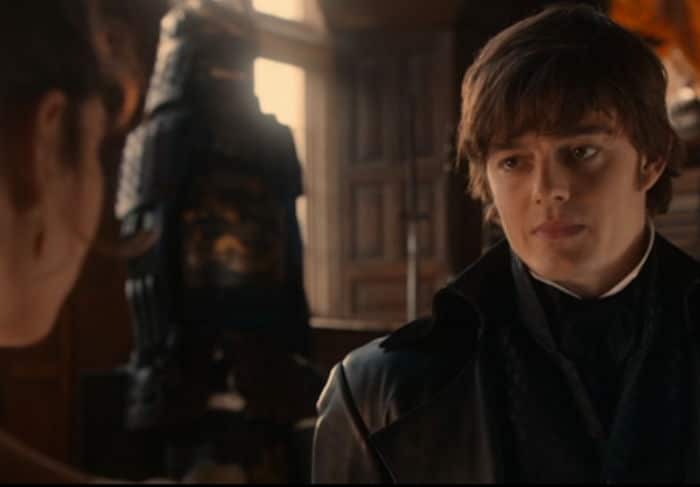 Surprised to hear Darcy credit her with such a feat, Lizzy raises her eyes to meet his at this statement. He continues by giving more a statement than a question, “What you said to me on Hingham Bridge…” 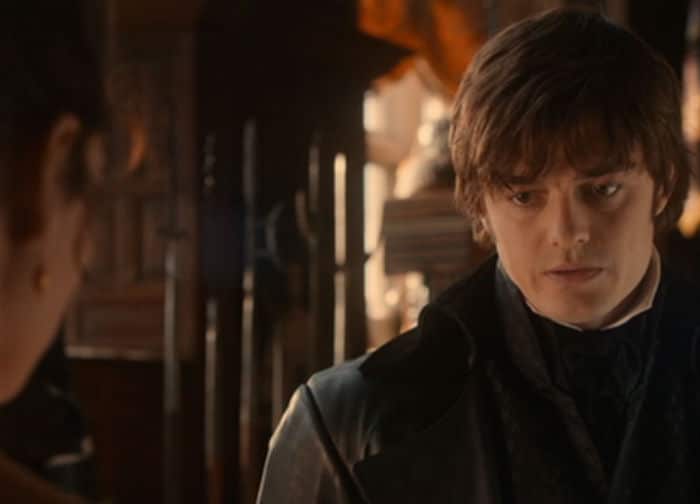 In surprise, Lizzy asks, “You heard me?” 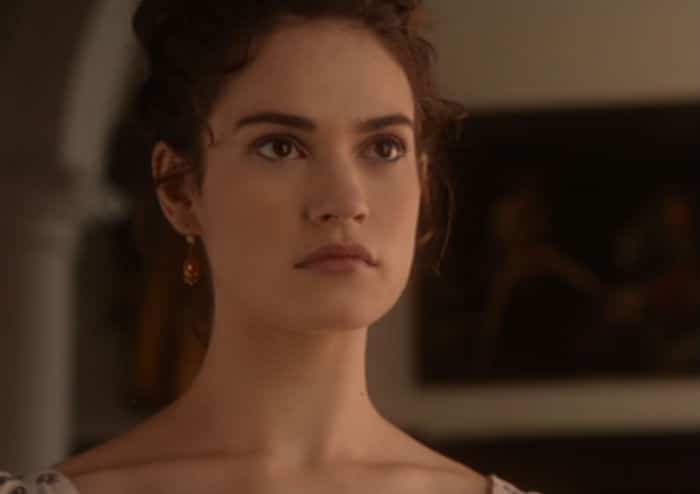 Softening, he simply replies, “I did.”

A crossed look passes over Lizzy’s face as if she were upset she admitted something in confidence, little realizing the receiving party was comprehending her feeling. Admitting to something he ordinarily wouldn’t, he continues by saying, “It gave me hope.” 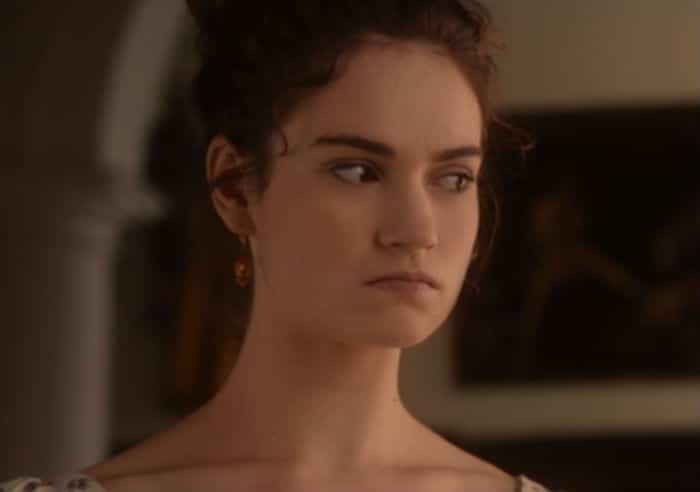 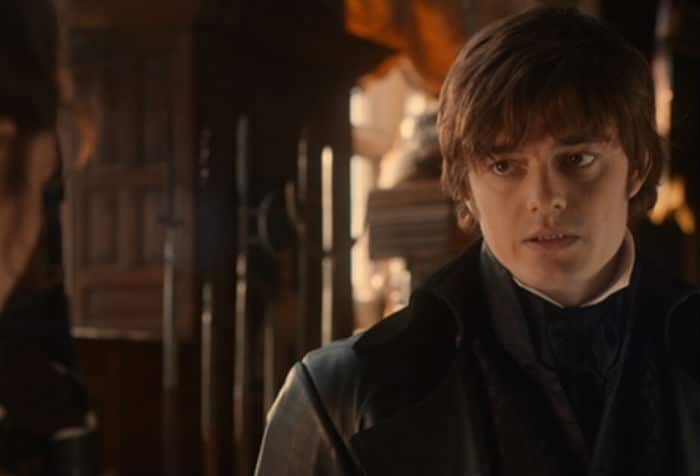 Softly she queries, “For what?”

With ever the slightest crack in his confidence, he returns, “That your feelings towards me may have changed?” Pressing ahead, he assures her with the following, “However one word from you now will silence me on the subject forever.”

Raising her chin with the smallest show of defiance, Lizzy stands there saying nothing forcing Darcy to continue. 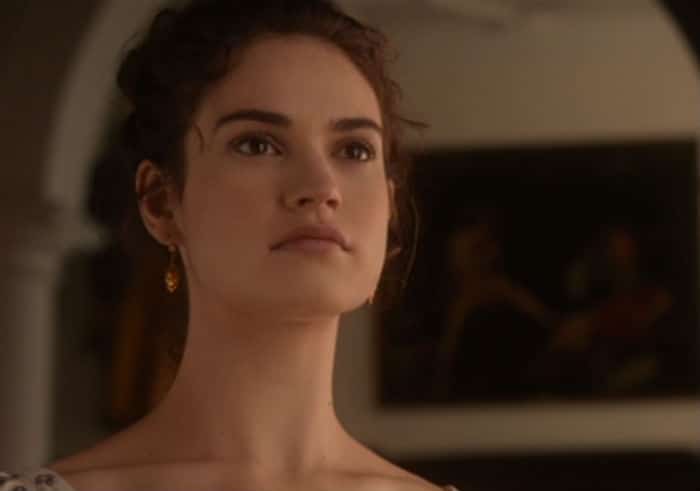 Taking opportunity from what the silence presents, he steps closer to Lizzy. Gazing downward, once Lizzy raises her eyes to again meet his, only then does he persist. Tenderly and with the kind of conviction that allows for no doubt, his romantic declaration continues. “You are the love of my life, Elizabeth Bennet. So I ask you now…” A brief pause separates these words from his next. “Half in anguish… half in hope…” He ends his speech with the glorious words Lizzy has been wishing to hear spoken from Fitzwilliam Darcy, “Will you do me the great honor of taking me for your husband?” 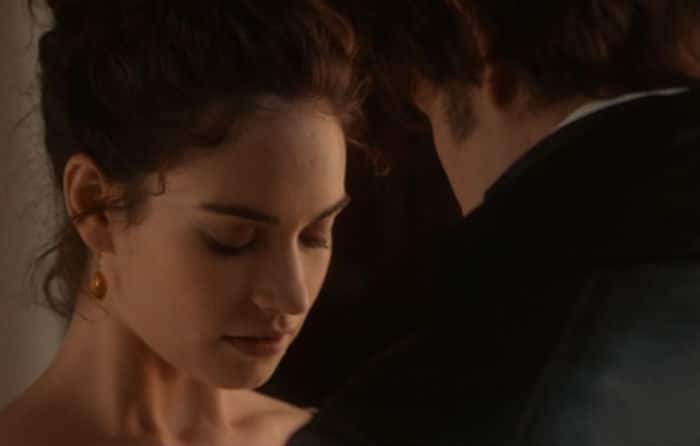 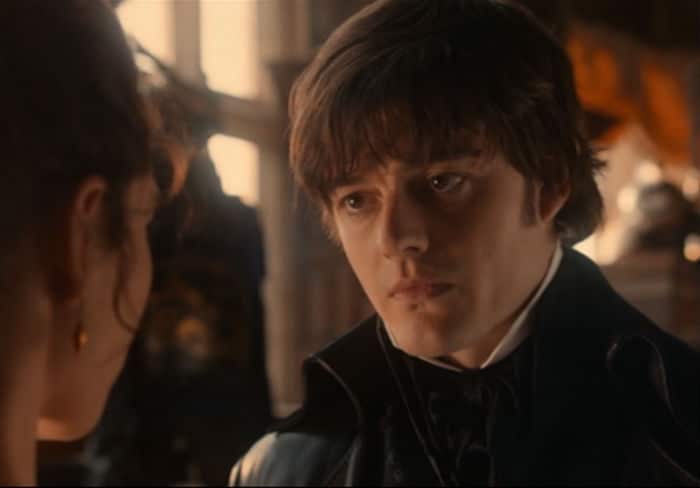 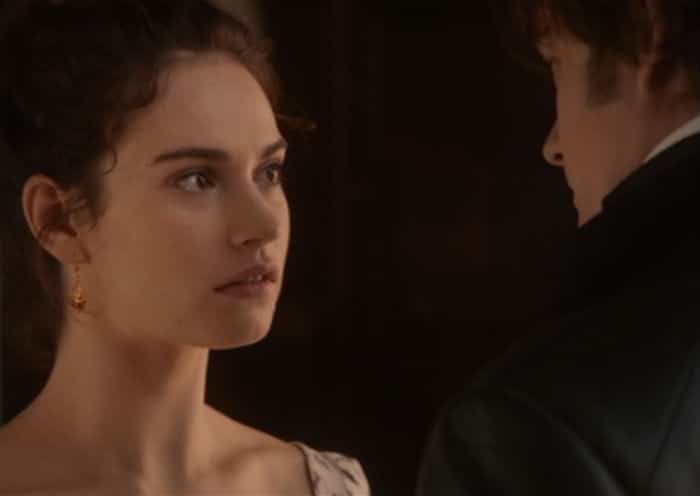 Tears shimmering in her eyes, a single word affirms her consent, “Yes,” she replies. 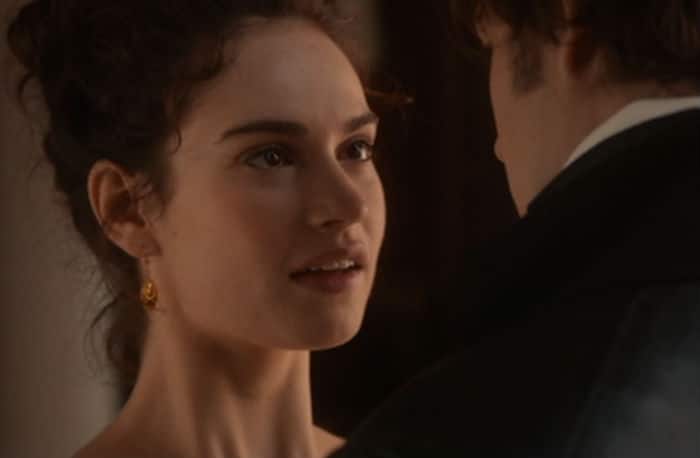 And for the second time in a matter of minutes, Darcy again, smiles as he looks into the face of the woman who has captured his heart. 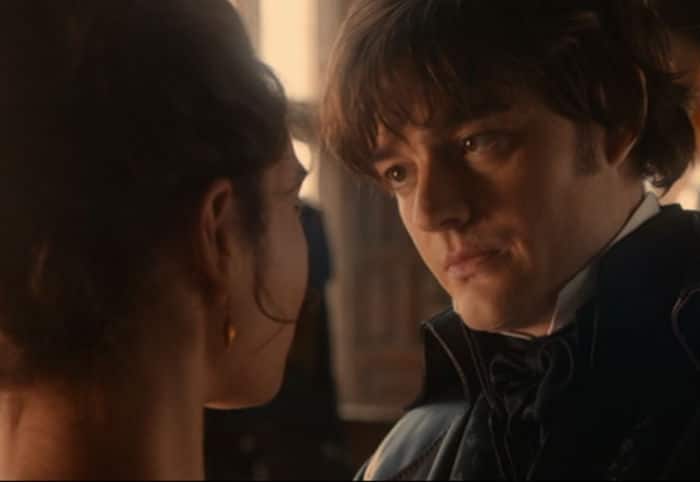 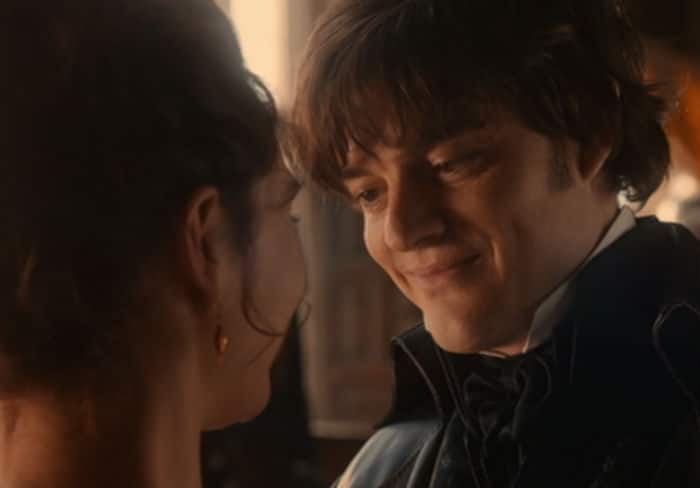 Together they meet for a kiss. 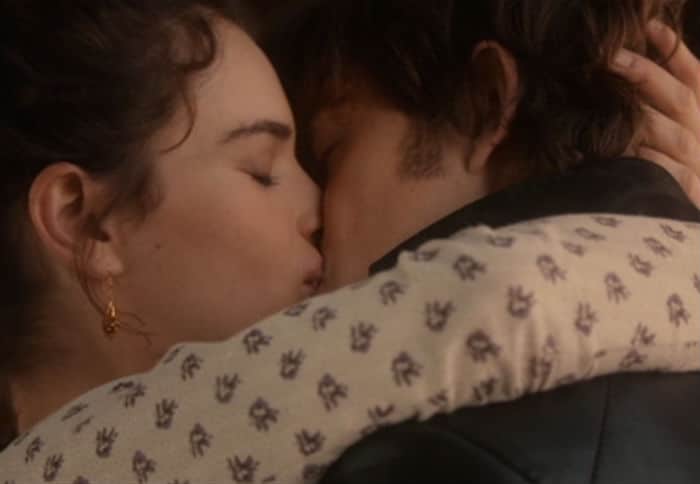 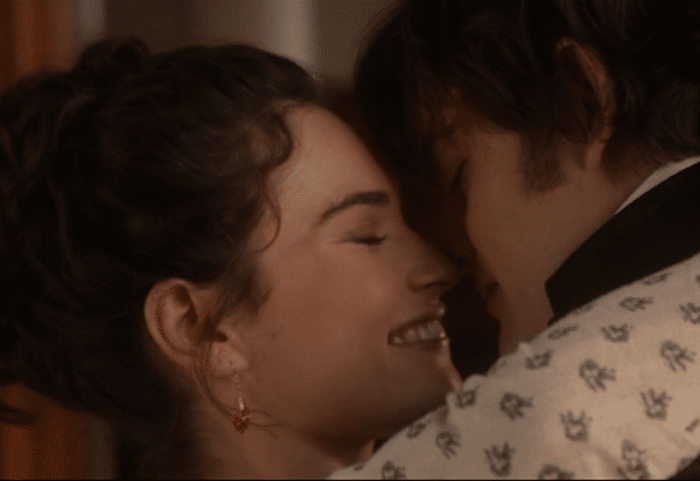 Although this literary mashup isn’t as romantic as its original counterpart, I must tell you that this scene holds its own. I’m not sure if it’s the acting, the staging or the script, but when Sam Riley says the words, “You are the love of my life…” the romantic fangirl in me was gone. If I had any residual doubt about whether or not this was my kind of film, this scene and moment erased all of my doubts.

What can I say? I’m one of those sappy fangirls who loves a good romantic ending.

What did you think of Pride and Prejudice and Zombies? Do you like this Lizzy Bennet and Darcy? What’s your favorite romantic moment? Comment with your thoughts down below. I’d be most pleased to chat with you about this recent adaptation.

Check out our Romantic Moment of the Week series for earlier entries or search our ‘Jane Austen’ tag for more Austen-related articles, reviews and more, including a review of the Pride and Prejudice and Zombies novel and film adaptation!

Our romance-themed entertainment site is on a mission to help you find the best period dramas, romance movies, TV shows, and books. Other topics include Jane Austen, Classic Hollywood, TV Couples, Fairy Tales, Romantic Living, Romanticism, and more. We’re damsels not in distress fighting for the all-new optimistic Romantic Revolution. Join us and subscribe. For more information, see our About, Old-Fashioned Romance 101, Modern Romanticism 101, and Romantic Living 101.
Pin this article to read later! And make sure to follow us on Pinterest.
By Rissi JC on June 25th, 2016

2 thoughts on “Romantic Moment of the Week: Lizzy Bennet and Col. Fitzwilliam Darcy”