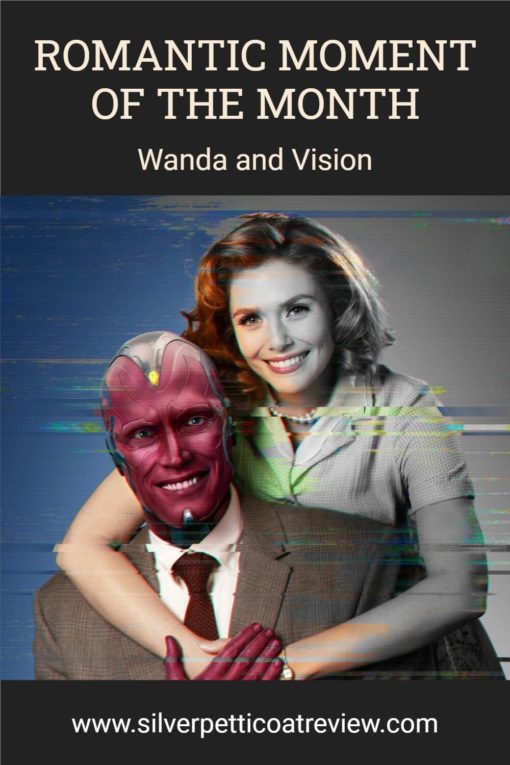 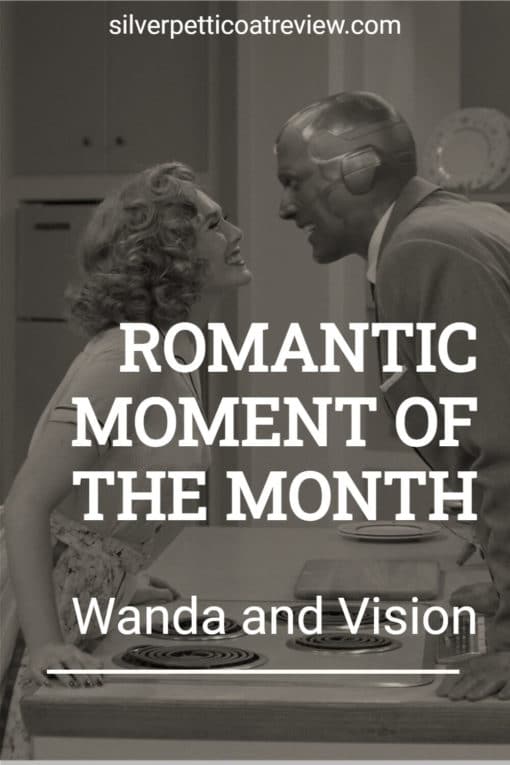 For the romantic moment of the month, we’re spotlighting Wanda and Vision from the WandaVision finale, which starred Elizabeth Olsen and Paul Bettany.

If you’ve been watching the innovative new addition to the Marvel-Verse, WandaVision, then you know it’s been a crazy ride to the finale with twists, turns, and a whole lot of romance and heartbreak. The love story of Wanda and Vision finally got their due, and it was beautiful to watch.

The series begins with a mystery: After the devasting events of The Avengers’ films leave Vision (a humanoid robot) seemingly dead, how are Wanda (a super-powered witch) and Vision living as a married couple in what appears to be 1950s suburban America in the style of a sitcom?

The story begins with them trying to live as a married couple who hide from their neighbors that they have super-powers. The series starts like a comedic homage to the past while spotlighting their relationship as a couple.

From there, each episode pays tribute to a new decade of sitcoms all the way to the ‘00s.

So, WandaVision begins like a period sitcom and evolves from black and white into color. But everything is not as it seems.

Each episode reveals more clues about what’s going on, with characters also trying to figure it out from Darcy Lewis of the Thor films to a grown-up Monica from Captain Marvel, Agent Woo from Ant-Man, and even Agatha Harkness (revealed hilariously to be a villainous witch who wants Wanda’s powers).

The series is unique because it is not about superhero adventures but is a metaphor for grief and loss. Wanda Maximoff has lost too much in her life, as we learn in this series. From losing her parents to bombings, to her twin brother Pietro, and then to Vision. The grief was finally too much.

WANDA AND VISION: THE SETUP

In a broken-down New Jersey town (picked by Vision before his death for them to build a life together in), Wanda, with unimaginable power she doesn’t understand how to use correctly, created a world inspired by her love of sitcoms. Her use of magic was a way to deal with her grief.

She “created” a new version of Vision from her memories and later two children. And yes, all three characters are very real.

It was like living inside a beautiful fantasy – except she also put a spell on the people of the town, taking away their free will. So, unintentionally she became a villain.

When Wanda learns of how she’s harmed innocent people, and with the government after her, and a resurrected Vision (the original one now transformed into someone new) out in the world created by a corrupt government leader, Wanda (now understanding that she is the Scarlet Witch capable of great but destructive magic), realizes she must undo her spell.

The only problem is her family cannot live outside of the spell and will cease to exist. But it is the only thing Wanda can do to release the people she’s harmed. Wanda’s unimaginable choice leads us to the romantic moment of the month.

WANDA AND VISION: THE ROMANTIC MOMENT OF THE MONTH

Wanda, Vision, and their two children return home as the spell’s undoing spreads throughout the town. She wants to say goodbye in their house before the breakdown of the curse reaches them.

First, Wanda and Vision put their two boys down to bed, not telling them that they will soon disappear. It’s rather heartbreaking to watch.

And then it’s Wanda and Vision’s turn.

Wanda wanders through her living room alone. She peers with a broken heart at a portrait of her family. Soon, they will all be gone but her. She turns off a light and stands melancholy in the darkness. She walks and turns off a second light.

At the same time, Vision turns another light on, breaking the moment.

“I read somewhere that it’s bad luck to say goodbye in the dark,” Vision tells her.

She smiles and tells him that he didn’t. She’s right. It was just something for him to say.

“Perhaps not,” he agrees with a smile. “Perhaps I just wanted to see you clearly,” Vision admits. “And there you are!”

It’s all very romantic and sad at the same time. Vision knows he will cease to exist and is relishing his last moments with Wanda while she knows she will once again be alone in a matter of minutes.

A distant electrical humming breaks their moment. The spreading of the end of the spell will soon reach Vision and Wanda. What is the breaking of a curse for others is heartbreak for them. Together, they walk toward the front window and peer outside as they hold hands.

“Wanda, I know we can’t stay like this. But before I go, I feel I must know,” Vision says as they turn to face each other. “What am I?” he asks.

“You, Vision are the piece of the Mind Stone that lives in me,” Wanda explains as she caresses his cheek. Wanda continues: “You are a body of wires and blood and bone that I created. You are my sadness and my hope.”

As Wanda fights the tears threatening to stream down her face, Vision touches her hand on his face comfortingly.

Vision leans in to kiss Wanda, and they share an emotional embrace. It’s a sweet kiss full of love and loss and even hope.

The two pull apart with their time running out. Vision then shares his perspective: “I have been a voice with no body. A body, but not human. And now a memory made real. Who knows what I might be next? [Vision says with a smile.] We have said goodbye before, so it stands to reason—”

“We’ll say hello again!” Wanda interrupts with hope in her voice. There is still another Vision out there. Perhaps they’ll find each other once again.

As the music crescendos to an emotional climax, the breaking of the spell reaches them. They stare into each other’s eyes. Vision begins to disintegrate, but they don’t let go or break their intense emotional connection.

“So long, darling,” Vision says just as he disappears.

And with that, Wanda is left outside, standing in an empty lot. She raises her hood and begins her walk of shame through town, once again alone – and now hated by the townsfolk she unintentionally cursed.

Wanda soon crosses paths with Monica, who has more empathy for Wanda than the others.

“They’ll never know what you sacrificed for them,” Monica tells her.

“It wouldn’t change how they see me. And you, you don’t…you don’t hate me?” Wanda asks, surprised.

“Given the chance and given your power, I’d bring my Mom back. I know I would.”

Wanda apologizes and reveals that while she doesn’t understand the power she has, she will. The two say goodbye.

Later, perhaps months later, Wanda is shown in an isolated cabin learning spells. She also hears the voices of her two boys crying for help! So, who knows, her family may be alive somewhere after all.

Did you watch WandaVision? What did you think of the finale? Did you like the love story of Wanda and Vision? Let me know in the comments!