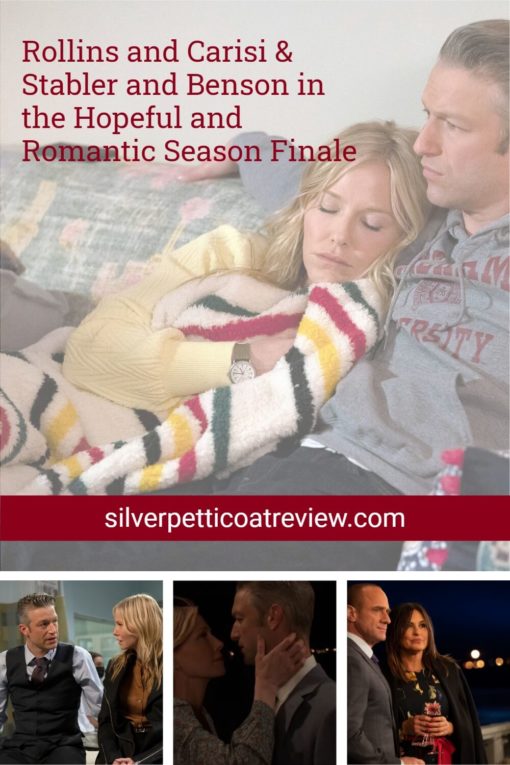 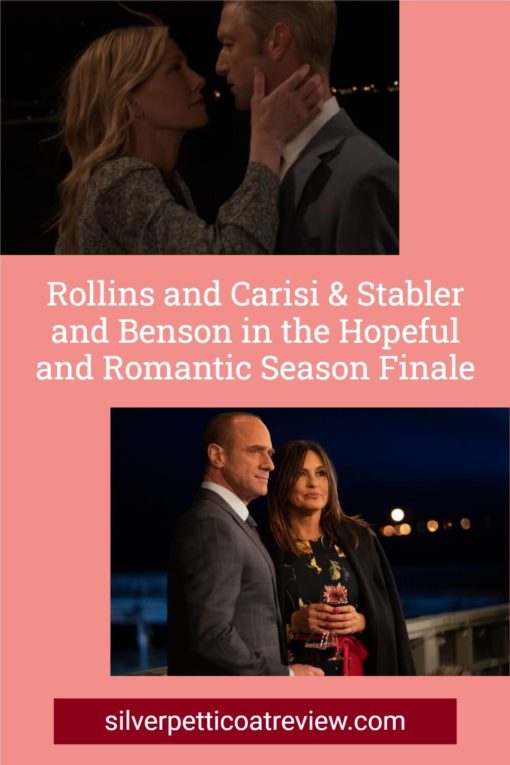 Law & Order: Special Victims Unit just gave us “almost” everything we ever wanted in the season 22 finale. The season finale ended with a series of romantic moments rather than a crime-related cliffhanger in a surprising twist. So, Rollins and Carisi plus Stabler and Benson both shared romantic scenes that left us more than a little excited for what’s to come next season.

Okay, to give a complete history of these two relationships would require an entire book. So, I’ll make it short and sweet.

Olivia Benson and Elliot Stabler became partners back in 1999, and despite his marriage, the chemistry and unresolved feelings between them continued to sizzle throughout the long-running show. But he is Catholic and loves his wife, and doesn’t believe in divorce.

On the other hand, Olivia, moral and full of integrity, clearly carries unrequited feelings for Stabler but never acts on them. She keeps them to herself.

But in 2011, Detective Stabler quits his job and leaves the SVU without telling her. So, he leaves Benson in the lurch, completely cutting her from his life. She was close to him and his family, but in a moment, he’s gone without a word.

Enter the 22nd season. Detective Stabler returns to New York City only for his wife to tragically die in a targeted bomb explosion. This tragedy leads to the spinoff series, Law & Order: Organized Crime, where he hunts down the people responsible. Meanwhile, Stabler and Benson reconnect – despite the issues they have.

They even have a shocking moment in Organized Crime when Stabler actually confesses accidentally to Olivia that he LOVES her with his children in the room. He has PTSD over his wife’s death and isn’t in complete control over his emotions. So, he’s more than shocked with his confession.

If anyone was in doubt about his “feelings,” this scene takes away a lot of the ambiguity. Not to mention that Richard Wheatley (Organized Crime’s main villain) figures out that “the love of” Stabler’s life is Olivia and says as much.

Both Law and Order shows have made it clear this year: Stabler and Benson love each other romantically but have obstacles to overcome if they’ll ever find a way to be together. Their timing has always been off, after all. And since Stabler mistreated Olivia, should she even give him a chance?

Amanda Rollins and Dominick Carisi Jr. have a less complicated history – but are just as intriguing as a TV couple. They worked together as partners in the Special Victims Unit before Carisi became a lawyer. But it always seemed like there could be something more between them – especially on Carisi’s end.

Amanda, however, seems to be completely unaware of the obvious unrequited feelings Carisi has for her. Plus, she always seems to choose the wrong men.

Despite this, Carisi is always there for Rollins – he’s her rock. But will she ever notice and return the feelings?

ROMANTIC MOMENT OF THE MONTH

While there is more than one romantic moment, it all comes from the final four minutes of the season 22 finale of Special Victims Unit, all with a unified theme: finding genuine love with a work partner.

On the day of Fin’s wedding to his first work partner, Phoebe, they decide to call it off and continue living together as committed romantic partners without marriage.

And in celebration, they continue the wedding festivities with their friends and family, including Olivia, Elliot, Amanda, and Carisi.

The first part of the romantic moment is a sweet scene between Carisi and Rollins, leading to their first kiss.

Carisi is disappointed he can’t read the speech he prepared for Fin and Phoebe’s wedding. So, Rollins asks him to read it to her.

He begins a little shy. [It’s obvious he wrote this speech while thinking of Amanda.]

“We are gathered here to witness and celebrate the union of Phoebe Baker and Fin Tutuola. Fin and Phoebe were each other’s first partners over 20 years ago, and a partnership is a lot like a marriage. You fight, then you make up.”

Carisi turns to look at Amanda, who’s listening intently. At this point, Amanda begins to have an epiphany, the camera zooming in on her face.

“But at the end of the day, you always have each other’s backs, and if you had to you’d take a bullet for each other. And a bond like that…That never goes away.”

Rollins begins to hold back tears as she awakens to her feelings for Carisi. He cuts his speech short when he notices her tears as she tries to turn away from him.

“Wait a second…are you crying? He asks.

“No, I don’t cry at weddings.” She tells him. “If I was, it’s just because I know how they end up,” she says in typical cynical form.

Carisi, who understands her personality, laughs as he pulls out a tissue. “You never cry, huh?” he points out as he wipes away her tears.

“Carisi.” Amanda says, trying to get his attention.

She puts her hand on his chest, and they stare into each other’s eyes. She leans in to kiss him.

They then share a sweet, tender, and very romantic first kiss.

STABLER AND BENSON: “TO PARTNERS”

The final part of this month’s romantic moment is a subtle, subtext-heavy scene between Olivia and Elliot with apparent parallels to Carisi’s speech and Fin and Phoebe’s non-wedding. They’re finally fully reconnecting and hinting toward a possible romantic future. And it’s about time.

Stabler gives her a jacket while she hands him a drink. Together, they look at Phoebe and Fin.

If this isn’t the world’s most obvious subtext and parallels, I don’t know what is! They stare into each other’s eyes knowingly, thinking about their own partnership.

“To partners!” Olivia says in a toast as they clink their wine glasses.

They smile at each other and take a sip as the camera pulls away.

Yes, now is not the right time. Elliot’s still in mourning, and he also mistreated Olivia for quite some time. For them to come together, it needs to feel earned, and it needs to feel right.

So, I think it will be a couple more seasons before they finally become a couple, but after what the two Law & Order shows have given us this year, it’s hard to deny that it’s the end plan.

Like Olivia, I was hesitant about the romance because of his abandonment, but I’m warming to the idea. Stabler and Benson are as iconic as Scully and Mulder, after all.

For now, we have Rollins and Carisi – which is just right!

Want to watch the entire scene? Law & Order’s official YouTube page posted the Rollins and Carisi and the Stabler and Benson moments.

What did you think of the surprising romantic finale of Law & Order: SVU? Have you been rooting for Carisi and Rollins? Do you think a romantic relationship will develop between Benson and Stabler soon? Discuss in the comments below.