Romantic comedies are among my favorite films. They strike a balance between love and humor which leave me feeling happy and uplifted, no matter what is going on in the real world. But sometimes, a romantic comedy has a little something extra which makes it special. Return to Me is one such film.

RETURN TO ME SUMMARY

Bob Rueland is still mourning the loss of his wife and childhood sweetheart. To honor her memory, he is working to complete a project which was close to her heart, a new gorilla habitat at the Chicago zoo.  But otherwise, Bob is stuck in his grief, hiding from life until a chance meeting with waitress Gracie Briggs lights a new spark in him.

Gracie is just now beginning to live after a recent heart transplant gave her new lease on life. Though she is still helping in her grandfather’s restaurant, she is practicing the art of small pleasures through her painting, gardening and close-knit relationships.  Gracie is attracted to Bob but is extremely sensitive to both the physical and emotional scars of her past health issues.

RELATED: A Date with Miss Fortune -A New Indie Romantic Comedy with Heart

As Gracie and Bob grow closer, however, their relationship grows and motivates their own personal growth. They recognize a kindred spirit in each other. But unbeknownst to either of them, there is something else which links them together. And when this link is finally revealed, they must both decide if love is more powerful than grief.

WHEN HUMOR AND ROMANCE MEET HOPE AND SINCERITY

Return to Me is just the sweetest, cutest little film and one which has flown under the radar for too long. Though it deals with heavy issues like grief and serious health challenges, it is actually a romantic comedy. Nevertheless, it is a quiet sort of comedy which keeps the story more light-hearted while striking a respectful tone toward the more serious aspects of Gracie and Bob’s lives.

RELATED: Battle of the Sexes -Romantic Comedies of the Sixties

When speaking of romantic comedies, the names of David Duchovny and Minnie Driver are not actors who usually come to mind. But they are both perfectly cast as the grieving widower Bob and the caring but slightly eccentric Gracie. Both Bob and Gracie are sweet, sincere, thoughtful, mature people. This makes it a delight to watch their relationship progress.

But it is not just Bob and Gracie who make Return to Me such a delight. There is a whole cast of secondary characters who round out their circle of family and friends. Gracie’s only living relative is her Grandpa Marty, who is played by Carroll O’Connor, aka Archie Bunker of All in the Family fame. He plays a very different role in this film as Gracie’s sweet-natured, over-protective father-figure. Gracie also has a cadre of secondary fathers in Marty’s poker buddies Angelo, Emmett, and Wally. Some of my favorite scenes are watching these men argue and debate as only long-term friends can over a host of topics none of them can agree on. They are also cute when they all decide to play Cupid and encourage the romance between Bob and Gracie.

RELATED: Not Another Happy Ending: A Refreshing Romantic Comedy

Bob and Gracie both have best friends who act as sounding boards and catalysts for their personal growth. David’s friend Charlie (David Alan Grier) is a bit of a joker who keeps pushing him to date again. Gracie’s friend Megan is more like a sister than a friend to her. Bonnie Hunt plays Megan. She is one of my favorite character actors and I’m always thrilled to see her onscreen. Gracie is actually woven into the fabric of Megan’s own life with her husband and children. I love seeing this type of relationship on screen as it mimics one in my own life.

Surprisingly, Bonnie Hunt not only acted in Return to Me but also directed and helped write the script. How’s that for talent? Her input is probably what makes this movie such a sensitive, charming, and funny story. 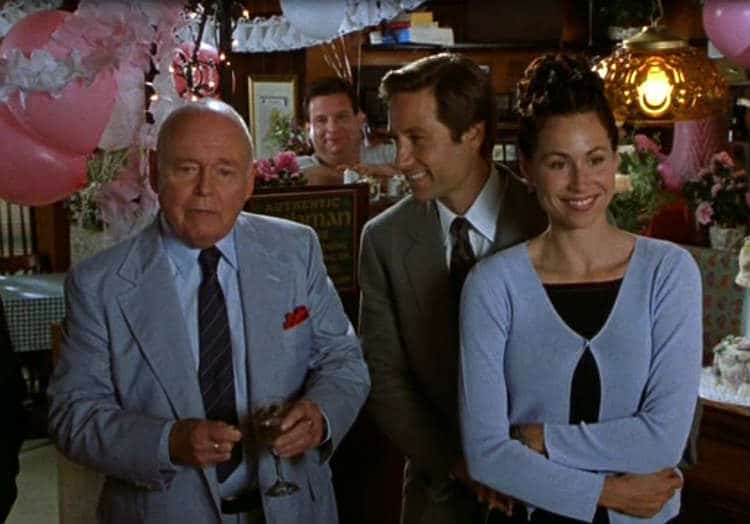 Despite being a more quiet, less lauded rom-com, Return to Me is one of the best offerings of that genre. It is a film with heart, one which looks at life honestly but with hope.  Return to Me is a film that will leave you with a warm glow and an appreciation for the things which really matter in life.

CONTENT NOTE: Though rated PG, Return to Me does have some profanity.

WHERE TO WATCH: Return to Me is available on DVD and to rent on Amazon, GooglePlay, and iTunes

Our romance-themed entertainment site is on a mission to help you find the best period dramas, romance movies, TV shows, and books. Other topics include Jane Austen, Classic Hollywood, TV Couples, Fairy Tales, Romantic Living, Romanticism, and more. We’re damsels not in distress fighting for the all-new optimistic Romantic Revolution. Join us and subscribe. For more information, see our About, Old-Fashioned Romance 101, Modern Romanticism 101, and Romantic Living 101.
By Brittaney B. on May 2nd, 2018