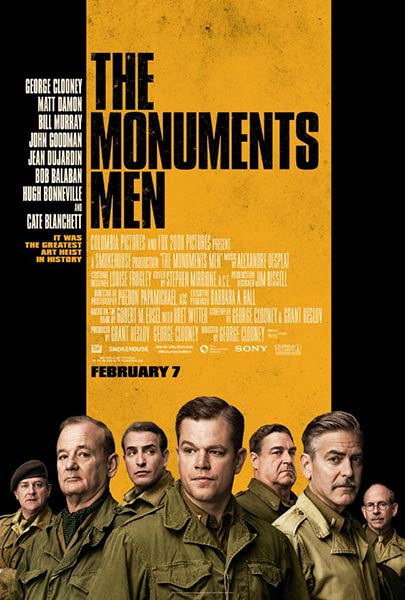 As the air grows crisp and cool it becomes time to set aside our summer reading and return our minds to “serious and intellectual” books and movies… But that doesn’t mean they can’t still be fun. The Monuments Men is the perfect combination of intellect and humor and is the perfect choice for getting back into serious films.

The Monuments Men was released in February of 2014 and starred George Clooney, Matt Damon, Bill Murray, and a half dozen other shining stars. Based on both real events and a book by the same title, the story follows a group of aged art scholars trying to save the great works of art during World War II and it is great! It is a quiet movie and there is very little action but that does not stop The Monuments Men from being exciting, it just has quieter victories. Victories I think everyone will cheer for.

The main thing that makes this movie fantastic are the speeches about the importance of art and humanity. People don’t talk like that in real life but they should because they think that way in their heads and in their hearts. The Monuments Men is full of beautiful concrete speeches about art and who we as a society are. It was a battle that went largely unfought but was very important. So much of our history and culture is in our art. This movie points that out in a beautiful way we all feel.

The other aspect that makes this film wonderful is the care the producers took in creating 1940’s Europe and dialogue. The characters and scenes are believable in World War II, unlike many period pieces. The acting is wonderful and the film itself puts you through a range of emotions.

This isn’t a romantic movie but it inspired the romance in my soul the way art is meant to. It’s the perfect film to cozy up with a blanket and some tea on these chilly fall evenings.

Our romance-themed entertainment site is on a mission to help you find the best period dramas, romance movies, TV shows, and books. Other topics include Jane Austen, Classic Hollywood, TV Couples, Fairy Tales, Romantic Living, Romanticism, and more. We’re damsels not in distress fighting for the all-new optimistic Romantic Revolution. Join us and subscribe. For more information, see our About, Old-Fashioned Romance 101, Modern Romanticism 101, and Romantic Living 101.
Pin this article to read later! And make sure to follow us on Pinterest.
By Katrina Daroff on September 19th, 2016