Much like the “magic” that lingers in the air at Christmas, Hallmark Channel creates magic with its Christmas campaign. The popular “Countdown to Christmas” (beginning the end of October and running through Christmas) invites us to sit cozily by their hearth as it were. The first of their (30+) new originals is Marry Me at Christmas, a romance sure to warm any romantic’s heart.

Small business owner Maddy Krug (Rachel Skarsten) needs a miracle. She loves her wedding dress shop, which she runs along with her business partner, Isabelle (Crystal Lowe). But passion for her work does not a business plan make. A kind of wish lands on her doorstep when she meets bride-to-be Ginger Blake (Emily Tennant). Ginger plans to marry in two weeks, but in order to pull this wedding together, she first needs a wedding planner. With Isabelle’s encouragement and Ginger’s pleading, Maddy accepts the role.

What she isn’t prepared for is who the bride’s brother is. He’s Hollywood’s heartthrob, Johnny Blake (Trevor Donovan). Weary of the “repeat” cycle of scripts and jobs he must take, Johnny is ready to spend quality time with his sister. What he doesn’t expect is the shift in his mentality; the more time he spends away from Hollywood, and with, Maddy, the more he wishes to stay.

Penned (Julie Sherman Wolfe) and directed (Terry Ingram) by frequent Hallmark collaborators, this first Christmas premiere is as cute as its title would suggest. To be honest, when I first saw the promo spot for this one, though I knew it’d be endearing, it didn’t scream “favorite”! In the aftermath of that first impression, I’m happy to report, this is one that surpasses those misconceptions.

Based on the novel of the same name by best-selling author, Susan Mallery (who also acts as a consultant), I assume (though I’ve never read the book) the story is fundamentally the same. Because of the drastic difference in their lifestyles, the wholesome nature of Marry Me at Christmas feels delicate (in a “first love” kind of way) and perfect. Of course, the leading couple helps invite these feelings from their respective characters. 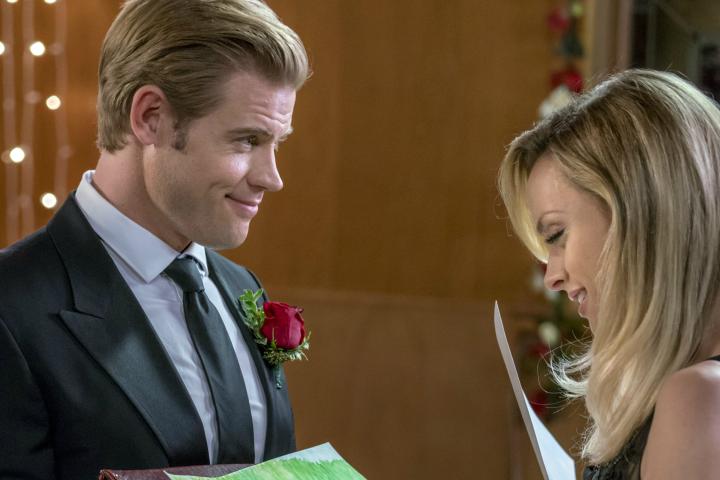 Leading man Trevor Donovan has played the role of a Hallmark leading man (Love on a Limb) before, but his co-star, Rachel Skarsten hasn’t appeared on this channel before. Donovan fits the image of an uber-popular action star perfectly. As a foil to that sense of glitzy lifestyle, Skarsten is lovely as the hometown girl who captures his heart. You may not recognize Rachel from this network, but anyone who’s watched the CW period drama, Reign certainly will. In the now-canceled show, the Canadian actress played Elizabeth I. (Of course, POstable fans will also recognize Crystal Lowe who plays Rita on Signed, Sealed and Delivered.)

Additionally, these two actors have a fantastic repertoire. The sass and (brand appropriate) flirting in the script is adorable to see unfold. Their scenes together make the viewer smile wide which is exactly the summed up reasons why viewers tune into this channel. We love the familiarity, entertainment and moral values each of the stories bring.

Those of you who are ready for the Christmas confections that are TV movies should not miss Marry Me at Christmas. It’s the first of what I suspect will be many new favorites for those of us who enjoy seasonal films during the holidays.

Where to watch: You can catch more showings of Marry Me at Christmas throughout November and December on Hallmark Channel; check your listings for dates and times.

Content Note: This TV Movie is rated TV-G and contains nothing offensive.

Our romance-themed entertainment site is on a mission to help you find the best period dramas, romance movies, TV shows, and books. Other topics include Jane Austen, Classic Hollywood, TV Couples, Fairy Tales, Romantic Living, Romanticism, and more. We’re damsels not in distress fighting for the all-new optimistic Romantic Revolution. Join us and subscribe. For more information, see our About, Old-Fashioned Romance 101, Modern Romanticism 101, and Romantic Living 101.
By Rissi JC on November 2nd, 2017