(I received a free copy of One Day in December from Crown Publishing. I was not compensated for my review and all opinions are my own.)

About One Day in December:

Laurie is pretty sure love at first sight doesn’t exist anywhere but the movies. But then, through a misted-up bus window one snowy December day, she sees a man who she knows instantly is the one. Their eyes meet, there’s a moment of pure magic…and then her bus drives away.

Certain they’re fated to find each other again, Laurie spends a year scanning every bus stop and cafe in London for him. But she doesn’t find him, not when it matters anyway. Instead they “reunite” at a Christmas party, when her best friend Sarah giddily introduces her new boyfriend to Laurie. It’s Jack, the man from the bus. It would be.

What follows for Laurie, Sarah and Jack is ten years of friendship, heartbreak, missed opportunities, roads not taken, and destinies reconsidered.

One Day in December Review 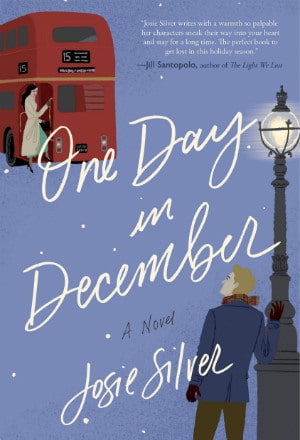 I loved this book. It is so heartfelt. One Day in December delivers a moving story of love and friendship. The story begins during the Christmas holidays. Amidst the chaos and exhaustion of the holidays, Laurie has one perfect moment in time. She locks eyes with a man and time freezes. For a few seconds, all is right in her world. Until the bus she’s sitting on pulls away from the stop he is waiting at.

It’s the cruelest of fates. What should be a joyous, wondrous discovery becomes messy. As the story progresses, it gets messier. This is what makes One Day in December so relatable. It doesn’t become an implausible tale of love at first sight. Instead, it’s a story that stays true to the heart. It explores its beauty and complications.

Author Josie Silver wrote a gorgeous story filled with heartbreak and laughter. The love triangle between Laurie, Sarah, and Jack never sinks to needless drama. Moreover, while the romance between Jack and Laurie is central to the story, so is Laurie’s relationship with Sarah. They are sisters in every way but blood. I love that Silver does not neglect Laurie and Sarah’s bond. Their friendship is just as central to the story as Laurie and Jack’s romance. In fact, I think it is the most important relationship in One Day in December.

I can’t neglect Jack. Laurie is not alone in her torment. Jack is right there with her. He loves Sarah, yet, he is drawn to Laurie. What I love about Jack is how he recognizes the special relationship between Laurie and Sarah. He sees their bond and gets that they are a team. Still, Jack’s choices are dubious. While he commits to Sarah, he is not completely honest with her. He’s hiding part of his heart from Sarah. I wanted to be angry with him….and Laurie for doing the same thing. However, Silver handled this duplicity in a sensitive, realistic way. So much so, I found myself understanding.

One Day in December would make a fantastic holiday film! As I read it, I kept thinking of films like Love Actually, The Holiday, and When Harry Met Sally. There is such a feel-good aspect of the book that would translate well to the screen. There are so many talented actors to that would beautifully portray Laurie, Sarah, and Jack. I could see Saoirse Ronan or Emma Watson as Laurie, Emma Stone as Sarah – if she can pull off a posh, British accent – and Tom Hughes or Theo James as Jack. Perhaps even Douglas Booth.

There is also a scene in the book involving cosplay that I would love to see on the big screen. I don’t want to spoil it but it was so outrageously fun that I can envision how entertaining it would be in a movie. Plus, there is an unexpectedly romantic moment in that scene that will have you sighing over how fickle fate can be.

Final Thoughts on One Day in December

One Day in December is a beautiful story of love, loss, and forgiveness. Laurie is a gorgeous character. Her search for fulfillment, for happiness, is relatable. Her journey of self-discovery will resonate with readers. In the end, readers will shed a tear (or two, or more!) as Laurie, Sarah, and Jack discover what love, friendship, and family mean to them. One Day in December will touch your heart. You will fall in love with this gorgeous read.

One Day in December will hit bookshelves on October 16th. Pre-order your copy today! You will not regret it!

Content Warning: Mild sexual innuendo. Also, for those prone to swooning over unexpected romantic moments, be sure to read while sitting on a comfy couch!

Our romance-themed entertainment site is on a mission to help you find the best period dramas, romance movies, TV shows, and books. Other topics include Jane Austen, Classic Hollywood, TV Couples, Fairy Tales, Romantic Living, Romanticism, and more. We’re damsels not in distress fighting for the all-new optimistic Romantic Revolution. Join us and subscribe. For more information, see our About, Old-Fashioned Romance 101, Modern Romanticism 101, and Romantic Living 101.
Pin this article to read later! And make sure to follow us on Pinterest.
By Catherine on October 8th, 2018

2 thoughts on “One Day in December: Fall in Love at First Sight”