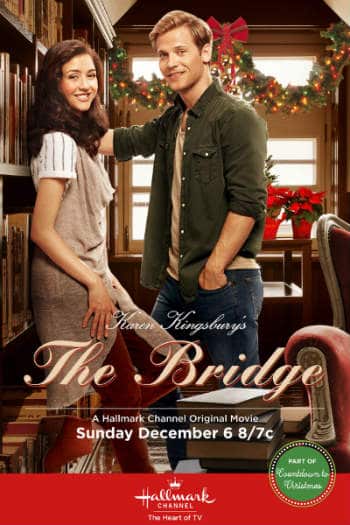 Whether or not you read her novels, I doubt there is a reader (in the inspirational fiction fan club) who hasn’t at least heard of the best-selling author, Karen Kingsbury. Because of this (and given the number of films based around similar novelist Janette Oke’s works), it was only a matter of time before some of her books were adapted into cinematic form. As a part of their “Countdown to Christmas” campaign, Hallmark Channel took on Karen’s Christmas short story of the same name, The Bridge.

Molly Allen (Katie Findlay) is ready to spread her wings. Only trouble is, she doesn’t really know where that might lead. As the only daughter of a wealthy businessman, her father expects her to take over his company. Molly grew up under that umbrella, but she isn’t sure that’s what she wants. She escapes her father’s overprotective arms when she exchanges the west coast for Southern charms where she attends college. In Tennessee, she meets Ryan Kelly (Wyatt Nash). Ryan’s life is very different than Molly’s. He’s the son of a single mother raised in a modest home, and he’s passionate about music. Still, it takes Molly to encourage him to dream beyond his safely constructed future…

Charlie and Donna (Ted McGinley, Faith Ford) run the small town bookstore, The Bridge where the entire community gathers for good fellowship. Though their own life didn’t pan out as they planned, the pair is fulfilled with a passion for their business and the outreach they offer the customers whose many lives they’ve touched… including those of Molly and Ryan.

It’s surprising Hallmark hasn’t adapted any of Karen’s novels before now considering their lean towards Christian fiction like Janette Oke, who’s novels have found a home on this channel many times over. Having not read the book (I didn’t have the extra time), I don’t know how the book is set up, but I found the film curious. It’s been broken into two parts, which seems unnecessary given the book is shorter in length. That being said, be prepared to leave these characters with many untied threads at best plus “part 2” doesn’t arrive until Christmas of 2016. (How we are meant to wait until then, I don’t know.)

Moving beyond my puzzled question of “why,” I’ll say this: the acting was really quite good in this one. I enjoyed the newcomers in the roles of Molly and Ryan. They seemed to suit the idea of a Karen Kingsbury book (I have read a handful of her other novels) and the chemistry that develops between them is memorable albeit without any tawdry implications which makes it all the sweeter. Each of their scenes together is lovely and I enjoyed watching their friendship blossom into something genuine.

Like any of the television films airing this season, The Bridge is a great option for those wanting something good yet lighthearted to watch. The tradition continues in this film with wholesome values that isn’t just about romance. No, there are some real issues and struggles presented that are relatable while still retaining its sunny nature. The Bridge accomplishes that though as I stated earlier, I am a bit miffed that December of 2016 is the next time I can step inside this book shop. That’s simply too long to wait on the choices facing Molly and Ryan. Until then, perhaps I’ll have a chance to read the novel and hope, for the sake of the characters I grew to enjoy, a happy ending is in store for them.

Have you seen The Bridge? Do you plan on watching it tonight or have you read the book? Comment down below with your thoughts.  The Bridge premiered last night on Hallmark Channel and scheduled to re-air several times in December.

Our romance-themed entertainment site is on a mission to help you find the best period dramas, romance movies, TV shows, and books. Other topics include Jane Austen, Classic Hollywood, TV Couples, Fairy Tales, Romantic Living, Romanticism, and more. We’re damsels not in distress fighting for the all-new optimistic Romantic Revolution. Join us and subscribe. For more information, see our About, Old-Fashioned Romance 101, Modern Romanticism 101, and Romantic Living 101.
Pin this article to read later! And make sure to follow us on Pinterest.
By Rissi JC on December 7th, 2015