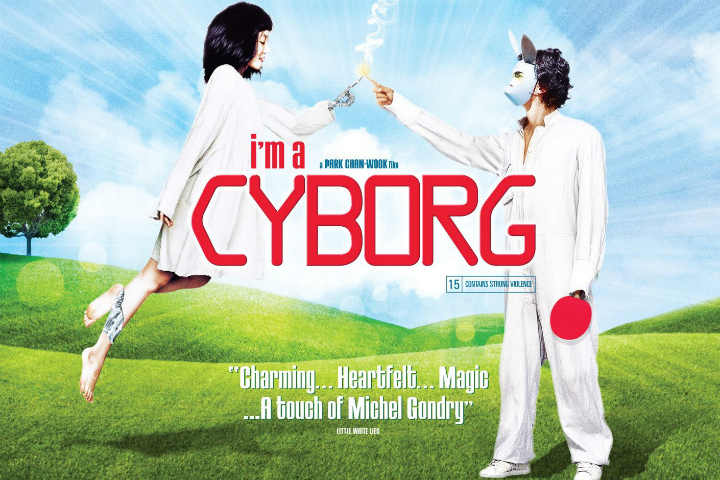 The more we think about insanity, the broader the definition becomes. Love, too, is a form of insanity as it makes people act completely out of character. On the other hand, if one is already insane, falling in love can be a source of sanity instead. It can ground you and put you on that path of recovery. Love is funny that way.

Such is the case in I’m a Cyborg but that’s OK. This is the beautiful story of Young-goon, who believes that she is a cyborg, and Il-soon, who saves her from starvation (both literal and figurative).

After watching this film, “Warranty for Life” will become one of the most romantic lines you’ve ever heard. I’m a Cyborg but that’s OK is such a beautiful film, both visually and psychologically, that I cannot recommend it enough. Fans of unusual and quirky stories would immensely enjoy this complex ride.

Young-goon (Im Soo-jung) thinks that she is a cyborg, but her affliction could have just as easily been anything else. The problem lies in the fact that her mother is all about keeping up appearances and asks Young-goon to hide her true self. Consequently nobody can understand or help her.

She longs to connect to people, but makes up rules that prevent her from doing so. Therefore, when her attempt to charge herself is interpreted as a suicide attempt, it is a blessing in disguise. This event lands her in a psychiatric facility where she meets Il-soon (Rain/ Jung Ji-hoon) and thus our story begins.

The purpose of my existence

As with most people, Young-goon tries to figure out her purpose in life. However, seeing as she believes herself to be a cyborg, her method of searching is a bit different. She wanders about the mental hospital casually chatting with the vending machines and having deep conversations with her radio.

The longing for connections is a theme explored throughout I’m a Cyborg but that’s OK and one that applies to most of the residents at the mental facility. This is just as relevant a theme in real life, so this film is like a condensed version of the things that bother most people on a daily basis. The people at the mental hospital are not all that different from the rest of us. Perhaps the difference simply lies in the fact that they feel these things even more acutely and thus have difficulties dealing with the outcomes of these emotions on their own.

Now, this radio must be broadcasting at a frequency only Young-goon can hear since it keeps spurring her on to certain actions. The problem is that her conscience won’t allow her to carry these out. Despite being a cyborg, she is actually extremely conflicted about what being one entails. So the radio reminds her of a cyborg’s seven deadly sins, which I simply must share with you.

The 7 Deadly Sins of a Cyborg

(In order of their evilness.) 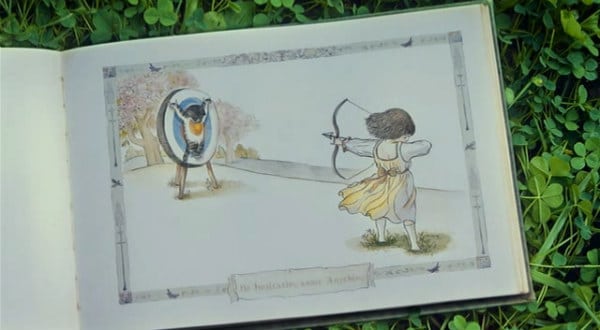 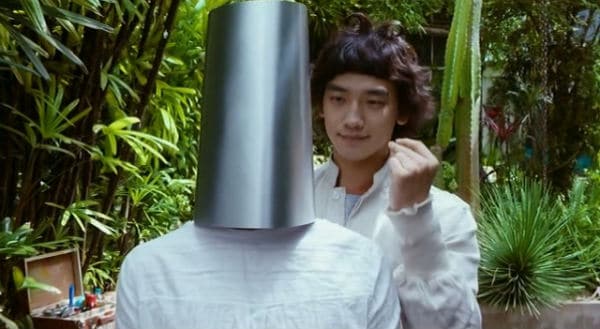 This is where Il-soon, another mental patient, comes into the picture. You see, Il-soon is a self-proclaimed thief, but he does not steal objects. That would be too easy! He steals intangible things like people’s quirks, skills, or habits. Or souls, if you will.

Il-soon is a fascinating character. Once he picks a suitable target, he goes around observing them. When he has zoned in on something particularly special, he goes ahead and steals this item and starts parading it around the hospital for all to see. Someone without a thorough understanding of people would not be able to carry out this type of stealing! The best part of this is that his victims are other patients who insist that he actually stole something from them. And until he gives back what he stole, they are unable to utilize that skill or trait.

While most people run from this thievery, one girl is just dying to have something taken from her. Namely, her sympathy towards others. It is the biggest sin there is to a cyborg, after all!

This charging method seems to have its limitations

A deal is struck as Young-goon promises to hate having her sympathy stolen. This is because Il-soon refuses to steal something if he first gets permission to steal it. Where’s the fun in that, right? So Il-soon starts to observe Young-goon and she pretends not to know about it as per their plan.

He quickly discovers that she lacks energy because she doesn’t eat anything. She sits there licking batteries in her unique charging method while others eat her food. This is the crux of the story. You see, Young-goon is hanging on by a thread due to her malnutrition. The only one who notices this is Il-soon, so he is the one who must take on the responsibility of saving her life.

What’s curious here is the process of how the two leads fall in love. When we become curious about others, we often start to observe them secretly. So it is an interesting inversion on the usual order of things seeing Il-soon start doing this AFTER receiving permission to do so. It’s always fun seeing a stereotype turned on its head and successfully at that.

I feel so sorry for her I could die

However, stealing sympathy comes with its own side effects. Il-soon, who is diagnosed as being anti-social, starts feeling sorry for someone else possibly for the first time in a very long time. It turns out that sympathy was something that Il-soon sorely needed. Despite being the main hero of the story and, in my opinion, the sanest person at that mental institution, he was arguably saved by Young-goon first. If he hadn’t stolen her sympathy, their love story may never have come to fruition.

It feels like Il-soon understands what makes others tick to a much deeper extent than even the doctors do. He is often more instrumental in helping patients towards a breakthrough. Usually by means of temporarily stealing what afflicts them. Can you imagine what self-exploration must come from experiencing life with and without something one supposedly couldn’t live without?

Whether he means to do it or not, he is the best and most effective psychiatrist at this place. As is often the case, a fellow patient is more instrumental in helping others than the doctors themselves. Unless, of course, the doctors are just as quirky, which they often are. Otherwise they wouldn’t have entered the field to begin with.

People who enjoy psychological rides like Eternal Sunshine of the Spotless Mind (2004) would most likely enjoy this film.

This film is probably not for everyone but I found it fascinating and beautiful in its insights into humanity. This film was a joy to watch in all its thought-provoking glory. But it is ultimately a love story, as so many stories are. I’m a Cyborg but that’s OK is a heartwarming film about people’s ability to be kind to each other masked as a dark rom-com. It shows that there is someone for everyone and that love can be the most effective medicine, or at least a starting point of healing.

And the music! This film has one of the best instrumental soundtracks I have ever come across. As evidenced by Exhibit A and Exhibit B. The music gives me pleasant shivers every time I hear it and works just as well separately from the film! Make sure you listen to some of the soundtrack, even if you decide to skip watching the film. This film even manages to make use of Rain’s excellent singing skills by making him steal a yodeling ability from another patient (this is the way he functions after all!) so that he can serenade Young-goon.

You may have recognized that the director of this film, Park Chan-Wook, is a very famous one in Korea and even abroad. However, he is famous for his intricately crafted tales of vengeance. So it was a surprise to everyone to see him tackle a rom-com. Thankfully, he did it differently, the way he does everything else! He put a wonderful spin on this genre and imbued it with an extraordinary energy and insight. Casting Im Soo-jung (Chicago Typewriter, I’m Sorry I Love You) and Rain, a big star of the film, drama, and musical industry, was also a stroke of genius. They were not afraid to look less than perfect and took on the roles with gusto.

There is something magical about this film and not just because it utilizes magical realism.

Content note: There are a couple of scenes of strong violence, which take place entirely in the imagination of our characters, similarly to how it was done in The Fall (2006). Funnily enough, scenes of violence stop feeling as violent upon discovering that they are part of a character’s imagination. These scenes are important as a tool to invoke a strong empathetic reaction in Il-soon towards Young-goon. As someone largely apathetic to the needs of others, this is an enormous step for him. He falls head over heels soon after. The rating is unclear and tends to vary between PG-13 and 15 depending on where you look. However, I would rate this a 15 due to the few violent imagined scenes and some treatment methods utilized.

Where to watch I’m a Cyborg but that’s OK

I’m a Cyborg but that’s OK can be found on Viki or purchased on DVD.

Have you already watched I’m a Cyborg but that’s OK? What did you think of it? Is there something a quality that you would like someone to steal from you (even temporarily)? Let me know below!

By Yaroslavna Simdyankina on June 12th, 2017