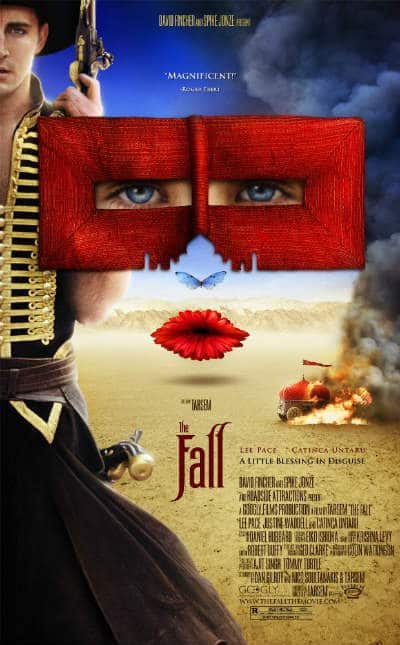 As far as fairy tales go, this is an exquisitely dark one. Words like epic, wonderful, and grand do not even begin to describe how amazing this story is. The Fall will break your heart only to masterfully put the pieces back together again in what is a perfect ending to a perfectly told fairy tale.

“Some day you will be old enough to start reading fairy tales again.” – C.S. Lewis

As Roy Walker lies bedridden in a hospital bed on the outskirts of Los Angeles in the 1920’s, a little girl with an imagination as great as her curiosity peaks into the room he is in. Rather than ignore her, he engages her in conversation. She is a favourite among the patients and people that work at the hospital. In short, she is famous, to use Roy’s own description of her.

Alexandria hops onto the bed and pulls the bed curtain closed around them in preparation for story time. Roy complies as he begins to weave “an epic tale of love and revenge” for the little girl. Being a curious child, Alexandria bombards the narrator with questions and suggestions throughout, making the story as much a product of her own imagination as that of Roy’s. As Roy describes each character, Alexandria gives them familiar faces in her mind. These are the faces of those who she has come across at the hospital and in the years spent with her family. By incorporating faces and objects from around them, they mold the characters into something very personal and special as they move through the story together.

Every epic story needs a villain. Thus, we are presented with one in Governor Odious. He is a man who, through his cruel deeds, brings the men in this story together in their thirst for vengeance. They are led through deserts and various adventures by the Masked Bandit, who morphs from Alexandria’s father into the visage of Roy as she starts seeing him as a father figure the more time she spends with him.

Unfortunately, Roy doesn’t tell the story out of the good of his heart. He is certainly very fond of Alexandria as nobody would be able to resist her sweet and inquisitive charms. However, he is embittered with life and has long since had a very final goal in mind. From the very beginning, his suicidal thoughts are strongly hinted at.

This is a man who knows how to make cliff-hangers work in his favour as he asks Alexandria to bring him morphine, refusing to continue the story until she does what he asks of her. As he begins to spiral further and further into the depths of despair, he starts destroying the characters and the world that he and Alexandria built together in scenes that are both emotionally difficult to watch and look away from at the same time.

You Won’t Regret Watching The Fall

Because this film is a feast for the eyes, ears, and the inner child yearning for a good story that exists within us all. What more can we really ask for as an audience when all these elements come together in a beautiful piece of art and storytelling that will stay with you forever?

On the surface it’s a fairy tale, but in the background it is an insight into the dangerous job of a stuntman. If you go back to the introductory scene after you watched the entire film, everything will fall into place. There are a lot of things that were not said with words, making them more impactful, which allowed the viewers to make the connections themselves.

Content Note: There are scenes of illness, death, violence, and mental anguish. There is no nudity or scenes of a sexual nature. The violence is purely there to indicate the mental state of the narrator of the story. If you opt for 15-rated version, you will be watching a slightly edited and thus milder version of the film.  Personally, I would even allow a child to watch this spectacular film because I know I would have loved this story as a child as much as I do now. However, the U.S. version is Rated R for violent images.

Where to Watch: The Fall is available on DVD and Amazon video.

Will Alexandria succeed in saving Roy’s soul? What will become of the Masked Bandit and his companions? Watch The Fall to find out!

Have you already seen The Fall? What is your favourite story told within another story? Share your thoughts below!

Our romance-themed entertainment site is on a mission to help you find the best period dramas, romance movies, TV shows, and books. Other topics include Jane Austen, Classic Hollywood, TV Couples, Fairy Tales, Romantic Living, Romanticism, and more. We’re damsels not in distress fighting for the all-new optimistic Romantic Revolution. Join us and subscribe. For more information, see our About, Old-Fashioned Romance 101, Modern Romanticism 101, and Romantic Living 101.
Pin this article to read later! And make sure to follow us on Pinterest.
By Yaroslavna Simdyankina on May 22nd, 2017