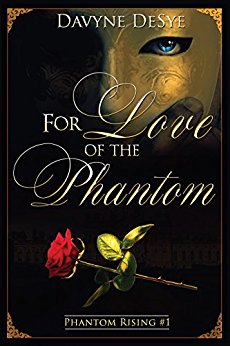 For Love of the Phantom Review

For Love of the Phantom is a sequel to Gaston Leroux’s The Phantom of the Opera. If unfamiliar with the story, the setting in the original novel is set in a Paris Opera house in the early years of the 1900’s. It features an innocent young orphan woman named Christine. She receives secret lessons in music by a man she only knows as the Angel of Music. Eventually, it is revealed that this same Angel is also the man feared by others as the Phantom of the Opera. Christine becomes embroiled in a triangle of sorts with the Phantom and her childhood friend Raoul, the Comte de Chagny. Although the Phantom initially wishes to keep Christine with him, using Raoul’s life as a bargaining chip, Christine’s compassion convinces him to let them both go.

For Love of the Phantom picks up right where the original Phantom leaves off. Raoul and Christine escape the Opera House, marry and eventually settle in London. Erik, the Phantom, manages to fake his own death to throw his old frenemy, the Persian, off his trail. Erik then follows Christine to London, determining to remain unseen but near the woman he loves.

But all is not well. Christine discovers that Raoul’s love for her is more as a beautiful possession and not simply for herself. He also forbids her to sing, fearing that it will remind her of her divided loyalties to the Phantom, whom he despises. Christine finds her fairy tale idea of love slowly dismantled as Raoul disregards her wishes until she finally discovers his infidelity. Christine remains secluded in her home, her only friend, an elderly gardener known as Peck.

Additionally, there is also a killer at large, whom the Persian believes could be Erik. But Erik determines to protect Christine from the man brutally murdering London’s women, while still maintaining his disguise as Peck. As the story of Christine, Erik, and Raoul continues, what will the outcome be?

WHAT ABOUT THE SOURCE MATERIAL?

Before going further I must confess, somewhat ashamedly, that I have never read the original Phantom of the Opera. The Phantom story I am familiar with is Andrew Lloyd Webber’s productions of stage and film. So, any opinions I have regarding this sequel will be influenced by these versions.

Both the film and stage versions left me wanting to know more about the Phantom himself as well as what happens to him after the concluding events. So, when I saw this highly rated sequel available, I immediately snapped it up.

Sequels of famous novels not written by the original author can be hit or miss. Trying to continue a well-loved story while also somewhat retaining the original author’s voice can be very tricky. Although I haven’t read the original, I would say that For Love of the Phantom both succeeds and fails at continuing the story from the film.

I can’t say too much about the characters of Christine, Erik, and Raoul without divulging spoilers. But I will say, I wasn’t too excited about the way Christine and Raoul’s characters are handled. Though neither one of them exhibit a strong personality in the film, in this sequel they are even less interesting. Raoul displays a selfish vapid-ness which seems out of character.

Christine continues to act as an innocent child in many ways.  Her lack of growth and maturity annoyed me. Not to mention, that both Christine and Raoul engage in extra-marital affairs. Raoul acts in the manner accepted by society at the time and Christine’s affair is understandable. But still, I disliked how quickly their love for each other grows cold.

As usual, Erik remains the most compelling character. Though I feel he lacks the mystery and menace he displayed in the film, that is not a drawback. Christine’s kindness and compassionate kiss from the origin story, have given him a taste of normalcy. This motivates him to move out of his emotional shadows. We see him continue to grow and learn how to operate as himself in a world which has previously rejected him. Erik displays a very real and deep love and concern for Christine which is inspiring, even if it is originally portrayed as a bit creepy.

The Persian is a character unique to the original book and I did appreciate his inclusion in this sequel. In many ways, he acts as both an antagonist and catalyst to Erik and Christine. His actions help move the plot along when it might otherwise stagnate. His persistence and determination to track down the truth about the Phantom add to the tension and urgency missing in the rest of this story.

As for the side plot of the serial killer who is alluded to be Jack the Ripper, I am ambivalent about its’ inclusion. Though I do think it is an interesting choice to combine two famous stories of dangerous men in one tale.

I would love to see this onscreen. Though it would be a very different film from the one Andrew Lloyd Webber has made. The setting alone guarantees less theatricality than what is inherent in a Parisian opera house. There are also fewer characters to focus on which could allow for even greater development for those remaining. Because they are cemented in the public’s awareness, I would keep the same cast from Phantom of the Opera, even though they do not match the physical descriptions given in the book.

Overall, I do think For Love of the Phantom lacks a bit of drama, tension, and passion as compared to the film and stage productions. I did appreciate the romance of the book and its’ ultimate conclusion. As a continuation of an established and beloved story, I do feel that this falters a bit. But if read as a stand-alone, re-imagined version of the Phantom of the Opera, I liked it better.

Although, based on the Goodreads and Amazon reviews for For Love of the Phantom, I am in the minority. Regardless of my own opinion, I still highly recommend this book to all fans of The Phantom of the Opera. Reviews other than my own are glowing and indicate that it stays true to Leroux’s original characterization. It also appears that this will become a series, as a second book has already been released.

Content Note: Though both Raoul and Christine engage in affairs it happens behind closed doors. There are a few descriptions of graphic violence thanks to the serial killer subplot But there is nothing too disturbing.

Our romance-themed entertainment site is on a mission to help you find the best period dramas, romance movies, TV shows, and books. Other topics include Jane Austen, Classic Hollywood, TV Couples, Fairy Tales, Romantic Living, Romanticism, and more. We’re damsels not in distress fighting for the all-new optimistic Romantic Revolution. Join us and subscribe. For more information, see our About, Old-Fashioned Romance 101, Modern Romanticism 101, and Romantic Living 101.
Pin this article to read later! And make sure to follow us on Pinterest.
By Brittaney B. on October 20th, 2017