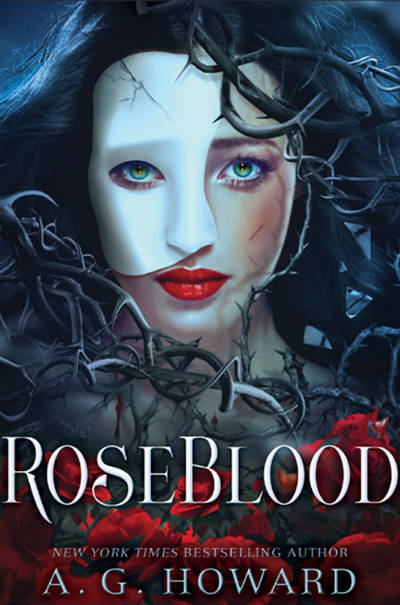 “In this modern day spin on Leroux’s gothic tale of unrequited love turned to madness, seventeen-year-old Rune Germain has a mysterious affliction linked to her operatic talent, and a horrifying mistake she’s trying to hide. Hoping creative direction will help her, Rune’s mother sends her to a French arts conservatory for her senior year, located in an opera house rumored to have ties to The Phantom of the Opera.

At RoseBlood, Rune secretly befriends the masked Thorn—an elusive violinist who not only guides her musical transformation through dreams that seem more real than reality itself, but somehow knows who she is behind her own masks. As the two discover an otherworldly connection and a soul-deep romance blossoms, Thorn’s dark agenda comes to light and he’s forced to make a deadly choice: lead Rune to her destruction, or face the wrath of the phantom who has haunted the opera house for a century, and is the only father he’s ever known.”

For readers who love dark, gothic tales of paranormal romance and horror, RoseBlood may just be the next YA book to add to your reading list. A retelling of Leroux’s infamous Phantom of the Opera, A.G. Howard explores a what if scenario. What if the Phantom was immortal and he had an adopted son? What if the story were actually true?

Set in modern day France, Rune Germain (like so many of our favorite YA protagonists) sets foot in a new school (which just so happens to be THE opera house Leroux based his story on) dedicated to the art of music. Here, Rune can hone her opera skills as well as hopefully heal her affliction: this innate hunger and need to sing that feels more like a curse than a gift.

Then she meets Thorn, a mysterious young man she thinks may be the Phantom from the stories. She gets pulled into his world as she discovers her own family roots. The two come together in a soulmate sort of way. It’s a twin soul connection that A.G. Howard cleverly gives a mythology.

As the story takes some twists and turns, little truths become apparent as Rune realizes the horror of the real Phantom’s plan for her. Is there any humanity left in him to save both him, Thorn, and Rune from the darkness? RoseBlood is definitely worth reading to find out!

What I absolutely adored about RoseBlood is A.G. Howard’s research into the plausible background of the ‘real’ Phantom. How she interweaves that with our modern pop culture perspective of the iconic character works seamlessly. Moreover, the Phantom’s mind and genius still shine brightly in this imaginative retelling. How everything connects definitely made me want to go do some Phantom and the real Christine research of my own. You may feel compelled to go down this little rabbit hole as well.

The gothic elements of RoseBlood also work well to draw you into the story. Clearly, A.G. Howard is influenced by classic literature and Byronic Heroes. As I am particularly devoted to Byronic Heroes (you know of the dark, broody variety), I appreciated Howard’s understanding of the trope.

As for the romance, I liked the soulmate love story between Thorn and Rune though I do think that there could have been a ‘little’ more development to make them come across just a tad more epic. Without giving away too many spoilers, I admit to slight confusion (or, at least, a question of why) on one aspect of the twin soul mythology regarding reincarnation. However, this is a small thing that doesn’t affect the general feel of the story.

Overall, YA paranormal romance readers, gothic enthusiasts, and Phantom fans should give RoseBlood a chance! Indeed, I believe you’ll be entertained.

RoseBlood needs to be a TV series! In fact, it would make a great addition to the CW lineup now that The Vampire Diaries has left a gaping hole. A TV show would give more time to develop the secret paranormal underground briefly mentioned in the book as well as give more focus on both the past story of the Phantom as well as the Present. The flashbacks would be amazing! However, I cannot even begin to guess who to cast as most of the actors would need to be able to sing as well. Any thoughts?

What do you think about RoseBlood? Sound off below…

Our romance-themed entertainment site is on a mission to help you find the best period dramas, romance movies, TV shows, and books. Other topics include Jane Austen, Classic Hollywood, TV Couples, Fairy Tales, Romantic Living, Romanticism, and more. We’re damsels not in distress fighting for the all-new optimistic Romantic Revolution. Join us and subscribe. For more information, see our About, Old-Fashioned Romance 101, Modern Romanticism 101, and Romantic Living 101.
Pin this article to read later! And make sure to follow us on Pinterest.
By Autumn Topping on March 16th, 2017