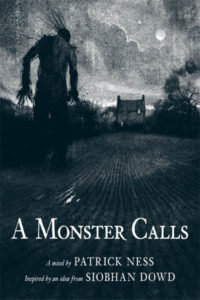 YA Book Review: A Monster Calls (2011) by Patrick Ness

“The monster showed up just after midnight. As they do.”

Thus begins the critically acclaimed and award-winning masterpiece that is the book A Monster Calls. Written by Patrick Ness, with an idea from Siobhan Dowd, and illustrated by Jim Kay, A Monster Calls won, in 2012, the Carnegie Medal, a British literary award granted to an outstanding work in children’s/young adult literature. It also won the Greenaway Medal that same year, a British literary award which recognizes distinguished illustration in children’s/young adult literature. A Monster Calls is the only book to have ever won both awards. It is an extraordinary feat – and deservedly so – for an extraordinary book.

RELATED: Living With The Dead: A Review of The Graveyard Book by Neil Gaiman

A Monster Calls and Tells Its Tales

In A Monster Calls, 13-year-old Conor O’Malley awakens from a recurring nightmare to hear a voice summoning him from the garden. It is the monster, who claims that Conor summoned it. The giant, tree-like monster has three true tales to tell him, returning at regular intervals to tell a new tale. And it expects, after its own final tale, to hear Conor’s own true tale. If Conor’s tale isn’t true, the monster promises to eat him.

The true tales the monster tells are folktales, dark fairytales, full of complicated human motivations and emotions and actions. The monster claims these tales to be true, to be tales of its previous summonings. The truths these tales reveal about the human capacity for self-deception, for “good” to do “bad” and for “bad” to do “good”, for good intentions to have dire consequences, parallel Conor’s own troubled life.

Conor’s mother is dying of cancer. His father is absent, physically and emotionally, living in a different country with a new family. His maternal grandmother can only hold it all together by being incredibly distant and unemotional and strict. Conor is constantly bullied at school. He’s withdrawn and without friends, rejecting all the proffered hands of friendship and love and support. Conor is lonely and sad and mad and scared and unsure. His nightmare comes again and again. The person he loves most on this planet is leaving him. And the monster comes to tell its tales. What’s Conor’s tale? What’s his truth?

My mother died of cancer after a prolonged illness when I was in my teens. So, this book hits very close to home. It is to Patrick Ness’s credit that he is able to write a painfully beautiful book that captures so authentically and evocatively the eddy of conflicting and swirling emotions that accompany the imminent death of a loved one. The book is a detailed snapshot of grief, of loss, of saying goodbye for the last time, of looking death in the eye and accepting the inevitable. “None of us get out of this life alive,” as my father often reminds me.

The story is terrifying and magnificent. It will break your heart and reaffirm your life. The book is a literal snot and sob fest by the end – tears blurring the words, snot running onto your lips, into your mouth. It will not be a pretty sight, but it will be heartachingly exquisite.

RELATED: Film Review: The Fault In Our Stars

The beauty of the book and its tale extends to its very creation. The British YA author Siobhan Dowd conceived of the work when she was diagnosed with terminal cancer. She had the idea, planned the characters and drafted the beginning. Then she died, 47 years old.

Patrick Ness was then approached by the publisher, Walker Books, to take on the project. After much contemplation, he decided to pick up the kernel of a dead woman’s story, to let it germinate in him and grow into a new story. It’s incredibly life-affirming, life inspiring life.

The thing about good ideas is that they grow other ideas…I felt – and feel – as if I’ve been handed a baton, a particularly fine writer has given me her story and said, “Go. Run with it. Make trouble.” So that’s what I tried to do. Along the way, I had only a single guideline: to write a book I think Siobhan would have liked. No other criteria could really matter. – Patrick Ness

And then Jim Kay was approached to illustrate this work. Kept in black and white and the many grey nuances in between, the illustrations supplement and complement the prose. The drawings shift between what appear to be simple graphite or charcoal renderings to intricate etchings to airy watercolors to stylized computer-layered images. His dark renderings evoke, adding texture to the page and making the story even more gripping.

Film Adaptation: A Monster Calls was adapted for the big screen last year and was released this past January in the US. Patrick Ness wrote the screenplay. Sigourney Weaver, Felicity Jones, and Liam Neeson star. I have yet to see it, but I will certainly be checking it out when I get the opportunity.

Content Note: As is obvious from the review, this book is not light-hearted fare. There is violence and death and terminal sickness and bullying. But there are no graphic or gruesome descriptions.

Have you read A Monster Calls? Seen the movie? What are your thoughts? Were you awash in snot and tears by the end?

Our romance-themed entertainment site is on a mission to help you find the best period dramas, romance movies, TV shows, and books. Other topics include Jane Austen, Classic Hollywood, TV Couples, Fairy Tales, Romantic Living, Romanticism, and more. We’re damsels not in distress fighting for the all-new optimistic Romantic Revolution. Join us and subscribe. For more information, see our About, Old-Fashioned Romance 101, Modern Romanticism 101, and Romantic Living 101.
Pin this article to read later! And make sure to follow us on Pinterest.
By Jessica Jørgensen on June 19th, 2017