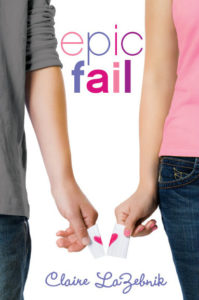 From the back-cover blurb: At Coral Tree Prep in Los Angeles, who your parents are can make or break you. Case in point: As the son of Hollywood royalty, Derek Edwards is pretty much prince of the school – not that he deigns to acknowledge many of his loyal subjects. As the daughter of the new principal, Elise Benton isn’t exactly on everyone’s must-sit-next-to-at-lunch list.

When Elise’s beautiful sister catches the eye of the prince’s best friend, Elise gets to spend a lot of time with Derek, making her the envy of every girl on campus. Except she refuses to fall for any of his rare smiles and instead warms up to his enemy, the surprisingly charming social outcast Webster Grant. But in this hilarious tale of fitting in and flirting, not all snubs are undeserved, not all celebrity brats are bratty, and pride and prejudice can get in the way of true love for only so long.

Many years ago, in a first-year English class at university, I argued that what Jane Austen had written with her novel First Impressions, published later as the canonical Pride and Prejudice, was the blueprint for romance novels. I had just spent a summer loaning Harlequin romance after Harlequin romance from the book shelves in the common room at my grandmother’s senior apartment complex. The senior ladies had assembled through the years a rather impressive collection of romances, and with these love stories percolating in my mind, I read Pride and Prejudice for the very first time in my very first English class in my very first semester at university. I was 17 years old, and I fell in love with Jane Austen.

My TA wasn’t so keen on my comparison between the incomparable classic and the apparently trashy serials, but the correlation has remained with me. What Austen wrote – and wrote so well – in Pride and Prejudice was the essence of boy meets girl and girl meets boy and all the complications, misjudgments, miscalculations, misunderstandings that occur, until our girl and boy become self-aware enough and insightful enough to acknowledge their misplaced misapprehensions and their misguided foibles, to forgive and make amends, and to grow into love and mutual respect.

A Recipe For Romance Put to Good Use

It’s a recipe for romance that Claire LaZebnik uses to create an entertaining and quick read, a retelling of First Impressions, set in all the drama and rich privilege of a California prep school, in her book Epic Fail.

The Benton family relocates cross-country to L.A., California from Amherst, Massachusetts after the mother, the embarrassing and rather strict Dr. Gardiner gets offered a leadership position at Coral Tree Prep. Meanwhile, Mr. Benton gets a teaching position.

The Gardiner-Benton daughters are Juliana, Elise, Layla and Kaitlyn. Juliana is the eldest, beautiful and immediately attracts the eye of Chase Baldwin, best friends with Derek Edwards, the aforementioned prince of the school. Chase has a piece-of-work sister, Chelsea, who has designs on Derek and will do what it takes to get rid of any competition. Elise is best friends with her older sister, smart, pretty, lively, witty and sparks fly between her and Derek. Layla is a few years younger than her older sisters, feeling left out of their intimacy, acting out, moody, irritating. Kaitlyn is the baby, young enough to not figure into the drama of the book.

Elise befriends Webster Grant, much to Derek’s consternation. Derek’s absent younger sister, Georgia, once was friends with Webster and Derek’s not been keen on him since…And on it goes.

The story is known and there are no major surprises or genre-altering twists. Instead of balls and dinner parties, we’ve got school dances and house parties and film premieres. Instead of letters back and forth, we’ve got phone calls and texts and emails. But the misunderstandings and misapprehensions are basically the same, the emotional essence of the original remains intact.

LaZebnik has written other modern adaptations of Austen’s works, and I will now be seeking those out.

Adaptation Recommendation: I don’t see enough American television and films to suggest potential young actors for a film adaptation of Epic Fail, but it’s a reworking of the classic tale that certainly could find its way successfully onto the screen. I, for one, love a good Austen adaptation.

Content Note: There’re some minor cuss words during a heated confrontation, but other than that, the book is rather “clean” language-wise and content-wise.

Do you ever tire of Austen adaptations? Or is it all good? Any modern remakes of which you’re especially fond, annoyed, disappointed? What are your thoughts on Epic Fail?

Our romance-themed entertainment site is on a mission to help you find the best period dramas, romance movies, TV shows, and books. Other topics include Jane Austen, Classic Hollywood, TV Couples, Fairy Tales, Romantic Living, Romanticism, and more. We’re damsels not in distress fighting for the all-new optimistic Romantic Revolution. Join us and subscribe. For more information, see our About, Old-Fashioned Romance 101, Modern Romanticism 101, and Romantic Living 101.
Pin this article to read later! And make sure to follow us on Pinterest.
By Jessica Jørgensen on May 20th, 2017