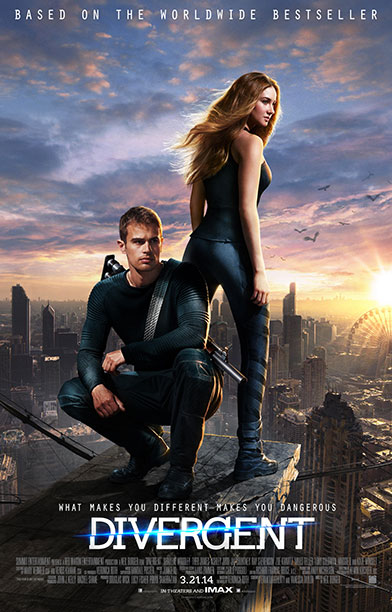 “DIVERGENT is a thrilling action-adventure film set in a world where people are divided into distinct factions based on human virtues. Tris Prior (Shailene Woodley) is warned she is Divergent and will never fit into any one group. When she discovers a conspiracy by a faction leader (Kate Winslet) to destroy all Divergents, Tris must learn to trust in the mysterious Four (Theo James) and together they must find out what makes being Divergent so dangerous before it’s too late. Based on thebest-selling book series by Veronica Roth.”

YA film adaptations have been getting a bad reputation lately and unfairly so I might add (Vampire Academy especially suffered from both terrible marketing as well as the worst reviews you could possibly imagine). Divergent, if you believe many of the critics, is just a weaker Hunger Games that also gets compared to Twilight (as if ALL YA should be compared to Twilight…) because there is a romance in it. I know the similarities astound me as well. But these comparisons just don’t hold water and it shouldn’t matter anyway. Who cares if Divergent is dystopian and has a teen, female lead? Who cares if it is the trendy thing to go and hate everything YA in film? How about we be like Tris and think for ourselves? Personally, I think the film community needs to become a little more divergent in their opinions.

I wanted these two to come together because not only were they likable and their characterization three-dimensional, their romance was believable, authentic, and convincing to boot.

IF, however, I did want to make comparisons between this and The Hunger Games, there is one area that Divergent improves by leaps and bounds, and that is the chemistry between the two leads. Tris (Shailene Woodley) and Four (Theo James) have some of the best romantic chemistry I’ve seen outside of television for a while (Logan and Veronica excluded of course). From the moment these two come into contact, you could ‘feel’ the tension, the attraction. As the story unfolds, I wanted these two to come together because not only were they likable and their characterization three-dimensional, their romance was believable, authentic, and convincing to boot. The build-up between Tris and Four was pretty darn perfect in my book, Four’s credible masculinity an extra bonus. And, speaking of books, if you love the book series, this casting is pure magic.

If romance isn’t your thing, that’s okay, because while there are a lot of romantic elements to the movie, Divergent is not a romance. Instead, it is a story about a young girl in search of her identity in a world where almost everyone can only be one thing, whether honest, brave, selfless, intelligent, or kind. Tris, played by the fantastic Shailene Woodley (her performance is wonderfully vulnerable), can’t conform to one faction, thus becoming Divergent, a dangerous title in a world where conformity keeps order. When she chooses to leave her family in Abnegation for Dauntless, the audience sees through her eyes as she trains to become a fighter in the midst of others much more physically stronger than Tris. The character becomes easy for the audience to identify with and root for as she struggles to find her way and face her fears. Moreover, Tris is a character that stands up for herself, even when it is difficult. This is a film where saying “no” is important. Furthermore, with a wonderful female lead, this is a film aimed at a female audience. Is this part of the reason there is so much backlash? Certainly makes you wonder, considering the YA adaptations are mainly focused on female audiences and female characters in search of identity…

While the chemistry, acting, and characterization of Tris and Four are the highlights of Divergent, the story is also remarkably easy to follow for non-readers. I saw it with a couple of people who haven’t read the books, and there was no confusion whatsoever, the script seemingly adapted from the series with ease. The changes made sense for a visual medium. Not to mention, that we can’t really complain that Kate Winslet as the perfectly, icy villainess was given more to do. It was refreshing to see Winslet do something different as well as to also see a cast with several female characters in a variety of roles in the movie. From the main lead, Tris’s heroic mother played by Ashley Judd, Kate Winslet as the villain, to even the perfectly cast Maggie Q (Nikita) who clues Tris into what she is: Divergent, there is a lot to love when it comes to female power.

While not perfect (a couple of side characters could have been fleshed out more), overall Divergent made for great entertainment. It was romantic, sad, and engaging with characters that will likely win over your heart. I know I can’t wait for the next installment.

Check out our reviews of Winter’s Tale, Vampire Academy, and Labor Day.

Love Vampire Academy? Check out my article on the romance between Dimitry and Rose

Our romance-themed entertainment site is on a mission to help you find the best period dramas, romance movies, TV shows, and books. Other topics include Jane Austen, Classic Hollywood, TV Couples, Fairy Tales, Romantic Living, Romanticism, and more. We’re damsels not in distress fighting for the all-new optimistic Romantic Revolution. Join us and subscribe. For more information, see our About, Old-Fashioned Romance 101, Modern Romanticism 101, and Romantic Living 101.
Pin this article to read later! And make sure to follow us on Pinterest.
By Autumn Topping on March 24th, 2014