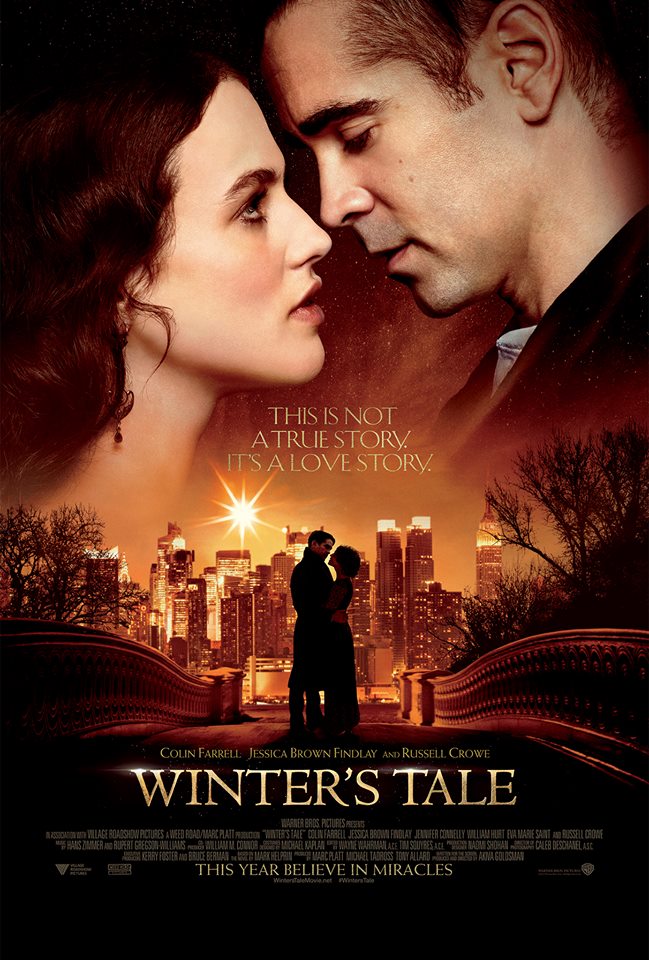 This is a wonderful, romantic fantasy that I know made me want to sit up and cheer by story’s end.

I’m having one of those rare moments when I can’t find the right words to describe exactly how I feel about a film. Magical, romantic, epic, beautiful, and inspiring are what come to mind but that doesn’t even scratch the surface of what Akiva Goldsman (screenwriter of A Beautiful Mind, Practical Magic, and Cinderella Man) accomplished in his adaptation of Winter’s Tale. First of all, if you go in with expectations based on the trailer alone, you may come out shocked and disappointed. This is very dissimilar to the trailer because it didn’t capture the essence of the film, particularly the fantastical elements behind it. What may seem like a time travel love story (no real time travel is involved) isn’t the case.  Instead, Winter’s Tale is magical realism and a good versus evil storyline (Lucifer, angels and demons, etc.) that sucks you into the film almost as much as the entrancing love story between Peter and Beverly.

The critics may have butchered this film, but their assessments aren’t fair in the slightest. Is it because the movie is romantic (the other romances got poor reviews as well)? They hate a fantasy with a flying horse? Perhaps, it had too hopeful of a message? OR, did the Christian mythology make them uncomfortable? (I don’t know about anyone else, but I can still LOVE both Christian based and atheistic based (Doctor Who) stories beyond my own personal beliefs; it is a story after all.) Whatever their reasons for wanting Winter’s Tale to fail, DON’T listen to them and don’t allow their negative, bitter, and vicious criticisms color your experience either (I’m with Neil Gaiman, one of the BEST fantasy authors out there, who also loved the film. You can read his take Here). This is a wonderful, romantic fantasy that I know made me want to sit up and cheer by story’s end. It may even make you believe in miracles.

The story follows Peter Lake, a thief trying to break free from under the thumb of the fabulously villainous Pearly Soames (Russell Crow). 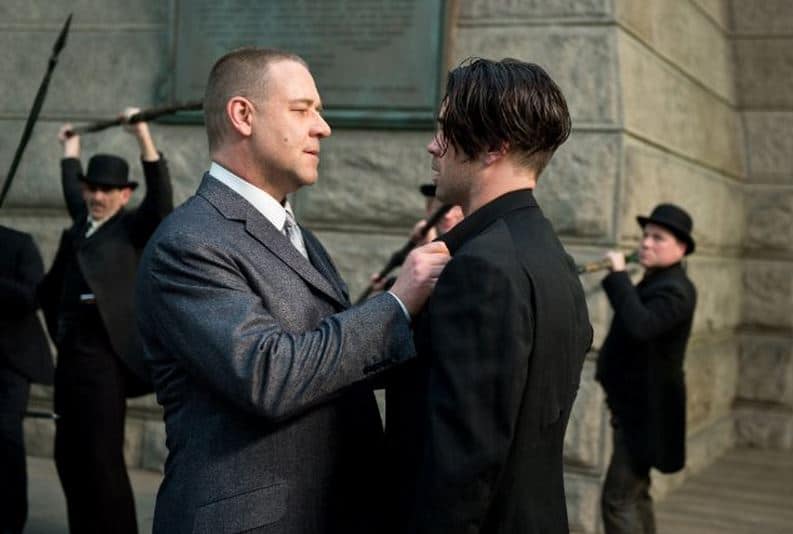 In his attempt at escape (for he had once worked with Pearly), he is saved by a mysterious white horse, a horse with wings. 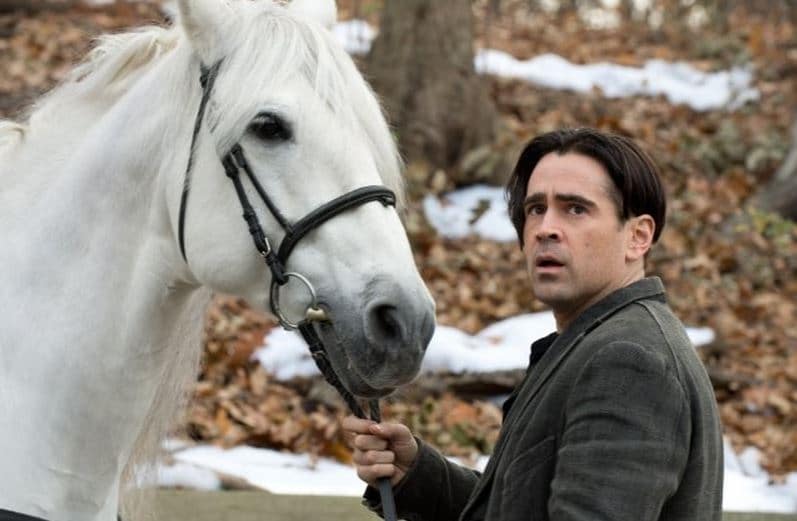 The horse leads Peter to a large mansion. Thinking the horse wants Peter to steal from the house, he breaks in only to meet the love of his life, Beverly Penn. Not only does she forgive him for breaking in, but she even makes Peter tea, confessing at the same time that she is dying. 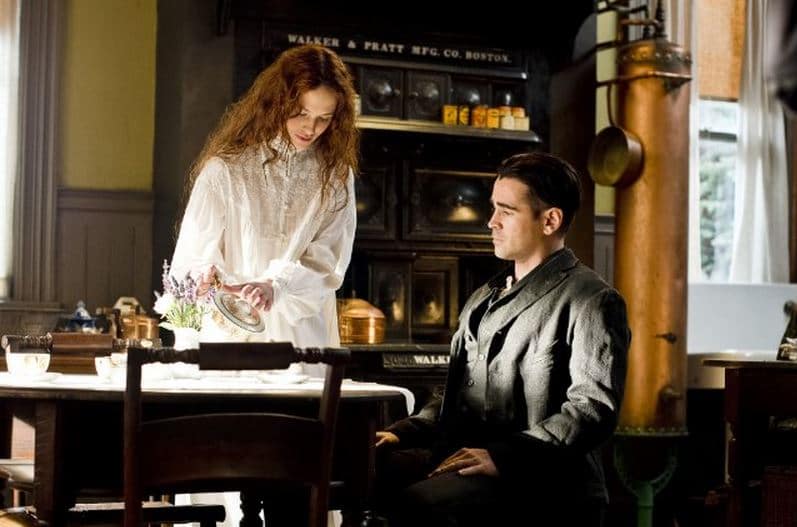 It soon becomes clear, that the two are destined to be together but in a world of good versus evil, Pearly can’t allow a miracle to happen (he spends his time preventing miracles and stealing the light, light all around us that hardly anyone can see). He must kill the red haired girl. As the two quickly (and believably) fall in love, Peter attempts to save Beverly from consumption, but can he save her before Pearly stops him? What follows, I can’t give away (such as how Peter ends up in 2014 and why) but I can assure you that the twists are well earned and the plot never dull. 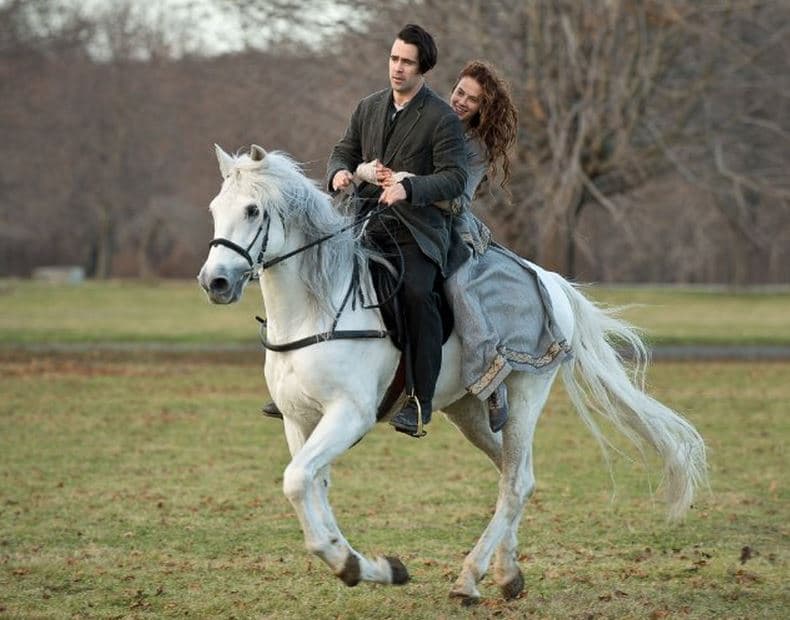 Aside from the interesting world building, the performances by all the characters (big and small parts) were simply wonderful. Jessica Brown Findlay as Beverly is particularly charming and stunning in this role. Similar to what she did with Sybil in Downton Abbey, Jessica brings this likeability factor to the role that really makes you want to root for her. She plays Beverly’s sweetness with ease. Here’s to hoping she continues to gain parts in other large films. As for Colin Farrell, I liked everything about him in this movie. While someone who hasn’t done much romance (though I loved him in Ondine), he pulls it off like a master and certainly needs to be the romantic leading man more often. I BELIEVE he loves Beverly at first glance (without seeming like a foolish twit like so many others). Together, their chemistry sparkles, fitting to the lights that surround them like a fairy-tale dream. Performances aside, their love story is also epic and swoon-worthy from the moment their eyes first meet (and even before then if I’m being honest).

As for the side players, everyone does well, from Russell Crowe (who really seemed to relish playing the bad guy), Jennifer Connelly, William Hurt, the child actors, Eva Marie Saint (I can’t spoil what part she plays but she is great as always), to Will Smith as the seemingly calm and collected Lucifer. There are no weak links. Still, the scene stealer award goes to the GORGEOUS white, winged horse. Whenever the horse came on screen, my focus turned to him because he is so glorious to behold. I’m sure some will scoff at the effects surrounding the horse, but I loved it because it felt like magic to me.

While I haven’t read the novel yet (on my list for sure), I know there are major differences. However, viewing this as an outsider, I can say that writer/director Akiva Goldsman (whether true or not to the book) has told a magnificent story with gorgeous dialogue (I especially love the voice over narration), excellent production design, intriguing world building, and a love story that will stay with you long after you leave the theater. In fact, for me, this has already made my list as one of my favorite movies of all time. Nevertheless, if you are naturally cynical, this may not be the film for you so fair warning. All in all, I would say Winter’s Tale is like a Frank Capra version of a romantic fantasy mixed with a fairy tale.

Romance Rating (I would give it a six if an option)

Our romance-themed entertainment site is on a mission to help you find the best period dramas, romance movies, TV shows, and books. Other topics include Jane Austen, Classic Hollywood, TV Couples, Fairy Tales, Romantic Living, Romanticism, and more. We’re damsels not in distress fighting for the all-new optimistic Romantic Revolution. Join us and subscribe. For more information, see our About, Old-Fashioned Romance 101, Modern Romanticism 101, and Romantic Living 101.
Pin this article to read later! And make sure to follow us on Pinterest.
By Autumn Topping on February 15th, 2014