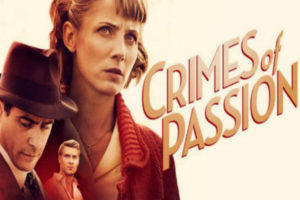 Crimes of Passion is a Swedish TV miniseries from 2013. It consists of six feature-length episodes, all based upon novels by Sweden’s version of Agatha Christie, namely Maria Lang, a nom de plume for Dagmar Lange (1914-1991).

The movies are beautifully shot. This is Swedish mid-twentieth century nostalgia at its finest. Mad Men meets The Killing, as some have dubbed it, although there is very little gritty noir in this, so perhaps it’s more Mad Men meets Murder, She Wrote or Miss Marple.

The stylish clothes, the lovely light, the rural landscapes, the beautiful settings, the societal norms and traditional mores, the free-flowing cigarettes and their resulting smoky haze – it is all so pleasantly intoxicating, and apparently, murderous.

Each episode is its own self-contained murder mystery – a new setting, a new whodunit – but with a trio of protagonists who remain the same throughout. The plucky heroine of the series is Puck Ekstedt, an observant, curious and insightful literature grad student (later Ph.D., personal assistant, author), doing a dissertation on murder in the modern novel, who knows how to read, not just words, but people and their stories and their motivations. Puck is played with aplomb by Tuva Novotny, a beautiful woman with rather entrancing eyes.

Puck is often discouraged in her sleuthing by her academic boyfriend (later husband), Einar “Eje” Bure, played by a golden-haired, blue-eyed beauty Linus Wahlgren. Eje is a steady, protective, cautious man, so it is very much against his will that Puck gets involved in these cases and stirs up trouble.

Rounding out the trio is Eje’s best friend, Christer Wijk, a police superintendent, homicide detective and notorious womanizer, oozing bad-boy sex appeal, who appreciates Puck’s keen eye for details (among other things) and even encourages her detecting. Christer is played by Ola Rapace, a brooding heartthrob of the Scandinavian screen, who is often playing troubled souls just begging to have their troubles loved out of them by good women.

Simmering Passions Amongst the Sleuths

Much of what makes Crimes of Passion so very watchable is the desire to see how this attraction will play out. Will Puck and Christer act upon this desire? Will its very existence, however, contained and restrained and suppressed, drive a wedge between Puck and Eje, between Eje and Christer? And will Puck risk the steady known for the exciting unknown?

These are the questions and emotions that simmer and stew throughout the series amongst our trio. The very emotions and passions (the jealousies, the longings, the betrayals, the rejections, the desires, the comeuppances) which lead to murder(s) in every single episode. You’ll have to watch to find out what Puck chooses.

The mysteries themselves all involve at least one murder and are classic, cozy whodunits à la Midsomer Murders or the aforementioned Murder, She Wrote and Miss Marple. There are little villages and nosey neighbors and grand estates and dysfunctional families and illicit affairs and unrequited loves and tragic trysts and reclusive weirdos and generational gripes and taboos to be tested and crossed, and intrigues, lots of societal intrigues, and secrets, too many secrets. Of course, there are murders, clean, cozy murders, without much graphic blood, guts and gore.

There are clues to follow and gather, suspects to scrutinize, darkened hallways to explore, lonely woods to trespass. There is suspense – threats to our heroine. Then there are wild goose chases and red herrings aplenty. And then there is the always neatly wrapped and satisfying denouement, the gathering of folk for the final revelation of just who did do it, how and why.

Sit Back, Suspend Disbelief and Enjoy

So, if you enjoy the cozy whodunit genre and can suspend disbelief of a totally innocent woman always ending up in the middle of murder and can overlook plot holes and other leaps of logic and don’t care too much about forensics and such, well, it is a beautifully pleasurable diversion. And the smoldering chemistry between Puck and her hubby’s best friend just adds that little extra sizzle.

It’s definitely worth a watch.

RELATED: And Then There Were None (2015) – Agatha Christie’s Dark and Mysterious Miniseries

Where to Watch: Crimes of Passion can be streamed on Netflix in Europe. It can also be streamed on Amazon Video (MHz Choice). It’s also available on DVD.

Content Note: Crimes of Passion is in Swedish with English subtitles. The series has no rating, but is probably PG-13 – there are many pallid, dead bodies!

What do you think about Crimes of Passion? Sound off below…

Pratar du svenska? If not, dubbing or subtitles – do you have a preference?

Our romance-themed entertainment site is on a mission to help you find the best period dramas, romance movies, TV shows, and books. Other topics include Jane Austen, Classic Hollywood, TV Couples, Fairy Tales, Romantic Living, Romanticism, and more. We’re damsels not in distress fighting for the all-new optimistic Romantic Revolution. Join us and subscribe. For more information, see our About, Old-Fashioned Romance 101, Modern Romanticism 101, and Romantic Living 101.
Pin this article to read later! And make sure to follow us on Pinterest.
By Jessica Jørgensen on May 12th, 2017

2 thoughts on “Crimes of Passion (2013): A Compelling and Cozy Crime Drama from Sweden”