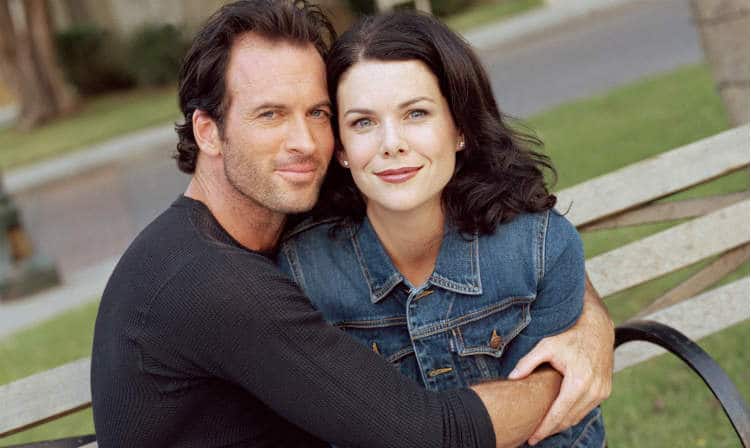 WB’s mother-daughter coming-of-age show Gilmore Girls still remains one of the most popular shows out there. At least, without looking at the technical numbers, this seems to be a general consensus thanks to the news of its return. For those unfamiliar, Gilmore Girls is about a single mother, Lorelai who is raising her daughter in the small town of Stars Hollow. While daughter Rory had a rotating group of young men vying for her heart – a primary three that sparked various “team X” fan girls, the will-they-or-won’t-they pairing of her mother, Lorelai with diner owner Luke Danes is the one relationship most viewers were most united on.

With all of the Netflix revival news related to Gilmore Girls, I thought it might be fun to spotlight a moment between the epic romance of Luke and Lorelai. Because this show aired for seven years, making a compelling case for these two without a reader knowing the context isn’t the easiest of tasks. But I shall endeavor to at least try and hope anyone unfamiliar with this show might be curious enough to finally see what the fuss is about.

The Lead-In of Luke and Lorelai

From the very beginning, there were sparks between Luke and Lorelai. From Luke keeping Lorelai hydrated with her daily fix of caffeine to near kisses while pondering the best paint colors to faking marriage while apartment hunting, these two enjoyed a solid and memorable friendship before anything else happened. 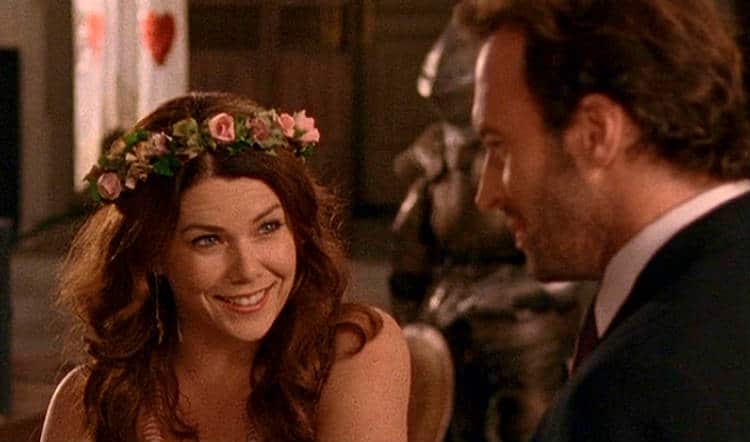 Until the one day, Luke finds Lorelai crying on a bench about the preemptive failure of a 20-year dream that involved owning her own inn. This moment changes their relationship. An invitation to his sister’s wedding follows where Lorelai learns “Luke can waltz!” in one of the sweetest, albeit adorably awkward first dance scenes ever. Later, the movie-hater Luke issues an invitation to a movie (this might suggest Lorelai is dating Luke, but if you were to ask her, she’s not sure).

All of this leads to the one momentous moment that forever shifts their relationship. Not to mention, a scene that though messy, is perfectly Luke and Lorelai.

Beware spoilers are ahead!

The Romantic Moment: Luke and Lorelai

As an investor in Lorelai’s new business, Luke earns himself an invitation to her family and friends weekend test run at the inn. He’s delighted, of course, until he spies Lorelai’s ex-boyfriend at Lorelai’s opening. Imagine his surprise because, well, Luke being Luke (the flannel-wearing strong silent type he is), he just assumes Lorelai knows his intentions. (Why does he really need to spell anything out?) 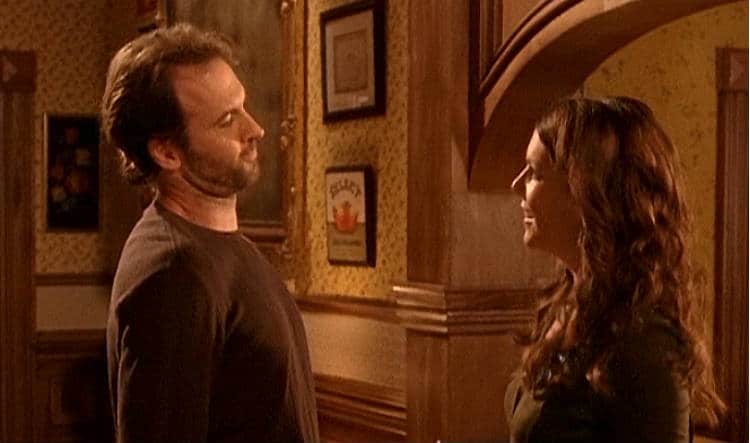 After everyone has gone home and the inn is quiet, he confronts Lorelai about what her ex Jason just told him. He feels a fool and he tells her so. Teetering on the edge of hysteria he asks, “I’m not a mysterious man, am I?” Snappy with an immediate comeback, Lorelai teases, “…Well, the wardrobe is a bit of a head-scratcher,” referencing his propensity to wear flannel and a ball cap. 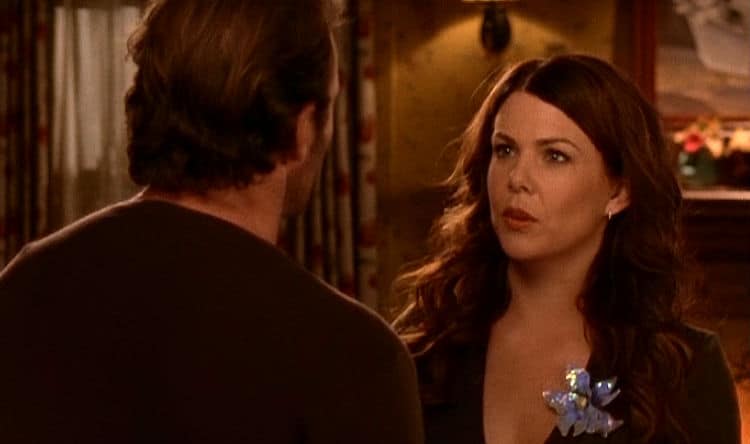 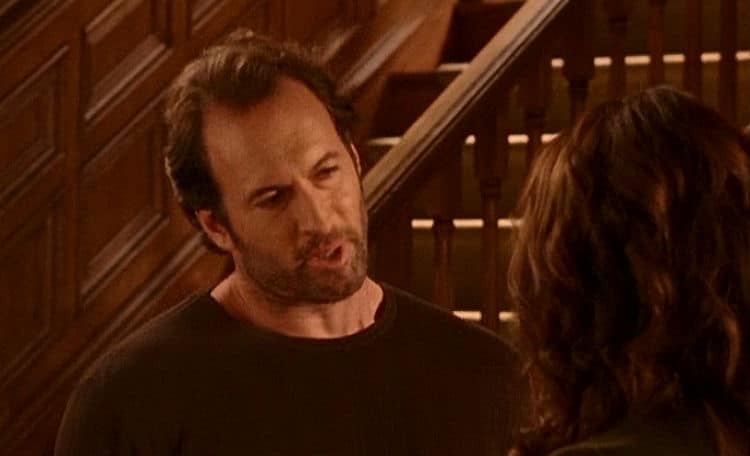 Ignoring her, as he’s prone to do when Lorelai takes nothing seriously, he proceeds. “…I think I’ve been very very clear with my intentions.” Angry, animated and very nearly out the door, Luke exclaims, “You knew what I was doing!” 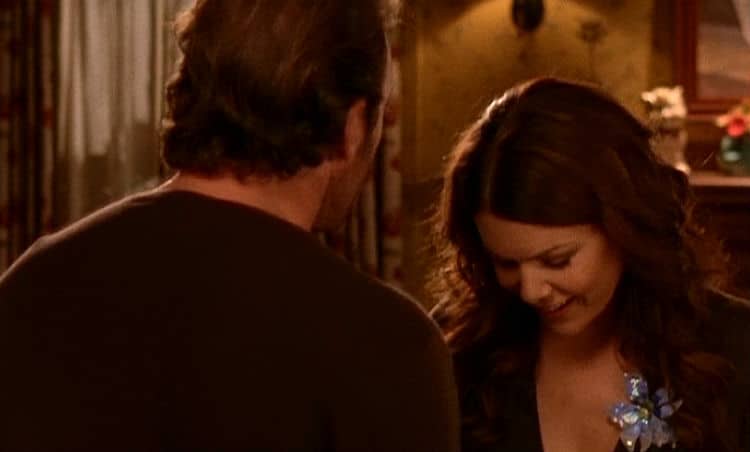 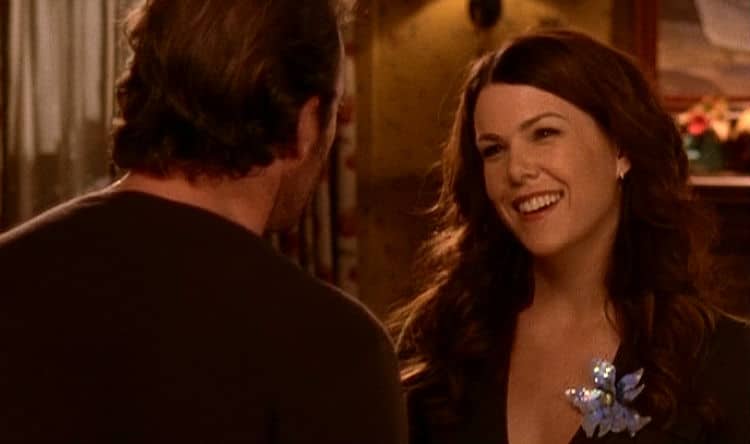 Putting on a bit of a baffled front, Lorelai counters with “Well, no, not officially.” A normally calm and collected Lorelai is flustered and unsuccessfully tries to get a word in. She does want to know how she was meant to know Luke wanted there to be an “us” between them.

Facing her, incredulous, Luke’s rant continues. “Not officially? Oh, come on. I mean, I didn’t have a ref present, but other than that.” 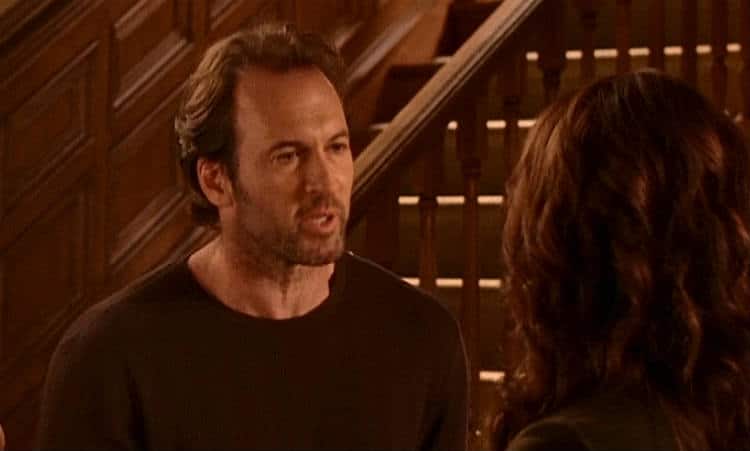 Determined not to let him best her in this argument, she persists. “Well, you didn’t say anything official.” 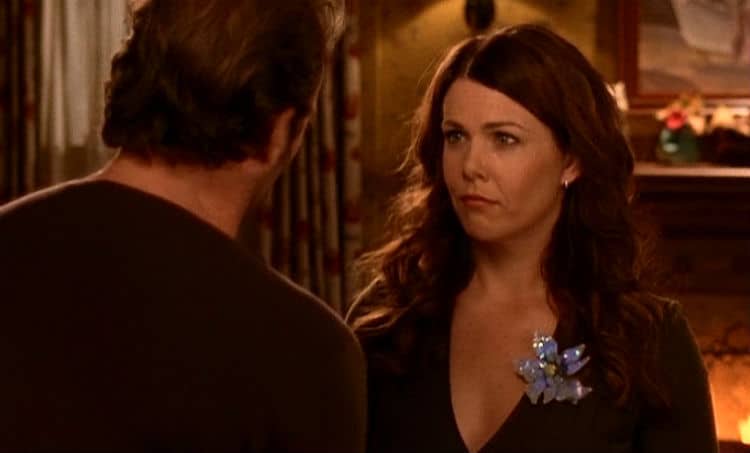 Trying to calm him down, she tells Luke he’s right… and she’s sorry.

Her apology falls on deaf ears. He goes on to confront her about it being wrong that she went along with each of his invitations and let him woo her when she is, according to Jason, dating another man. 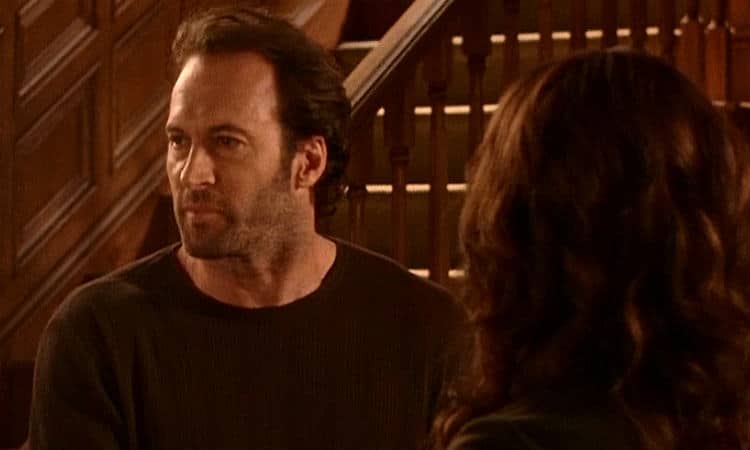 In no uncertain terms, Lorelai sets him straight: she’s NOT dating Jason.

But Luke isn’t done. He reaches the conclusion that all he’s done has been for nothing because… Lorelai is taken already. To an astonished Lorelai, with those words, Luke walks out the door as she exclaims, “I’m not taken!” 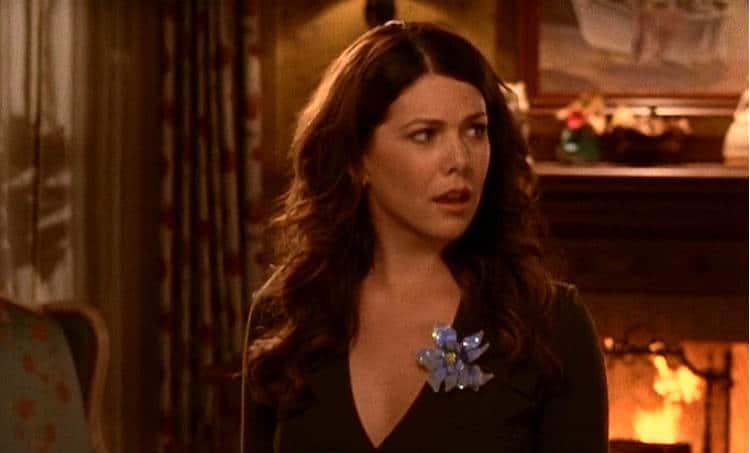 By this time, they’re facing each other outside the door standing on the inn’s porch. More of the argument spills over, including Luke proclaiming he did everything the book (a self-help romance book he’d read) said to do. 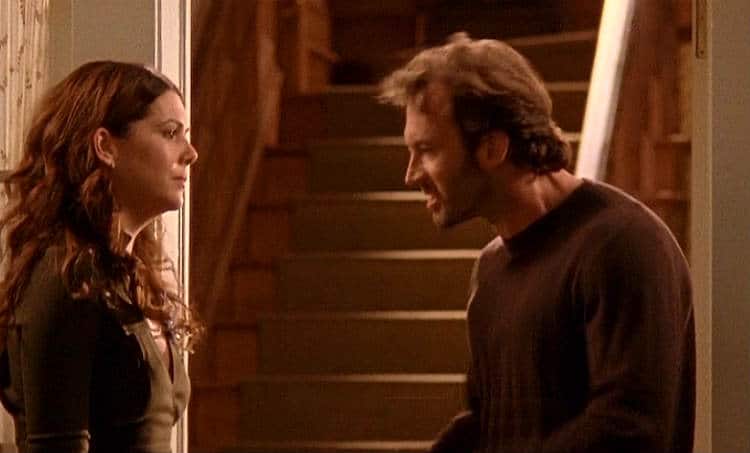 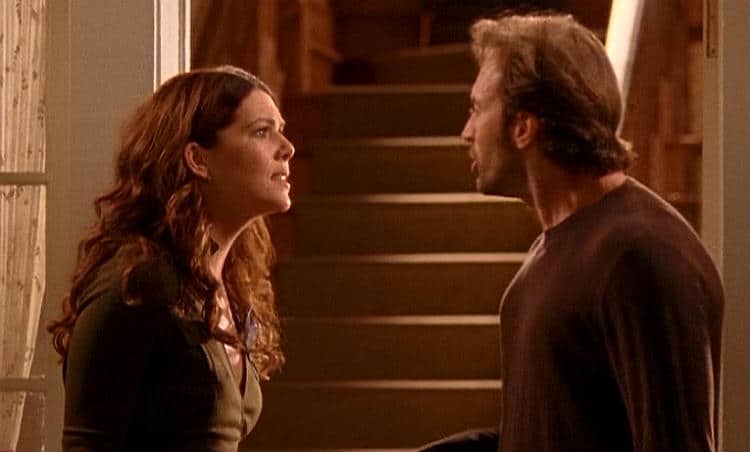 Still angry. he rambles on about never buying anyone flowers, and when he walked Lorelai home from the wedding, in a genuine way he says, “I thought there was a moment.”

“There was a moment,” she admits. 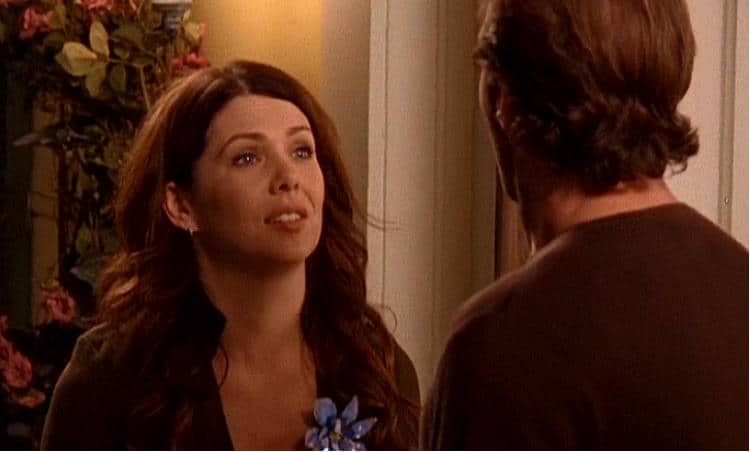 Out of breath, abruptly Luke takes a step towards Lorelai and leans in.

Putting out her hands, Lorelai, with an edge of panic asks him, “What are you doing?” 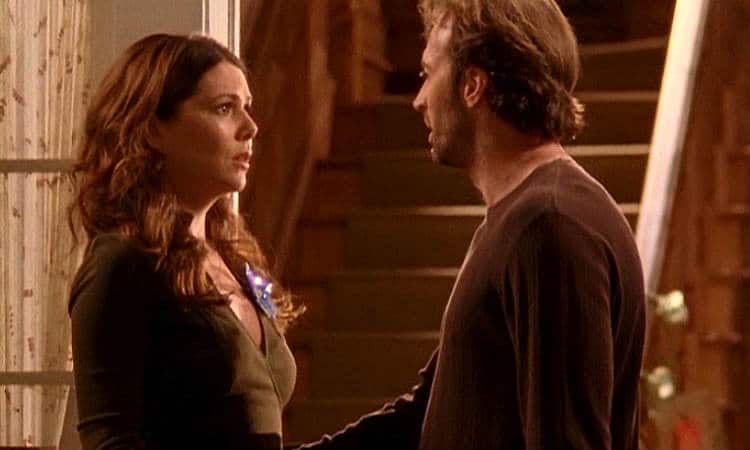 “Would you just stand still?” is all she gets. Calmly and with authority, Luke kisses her soundly. 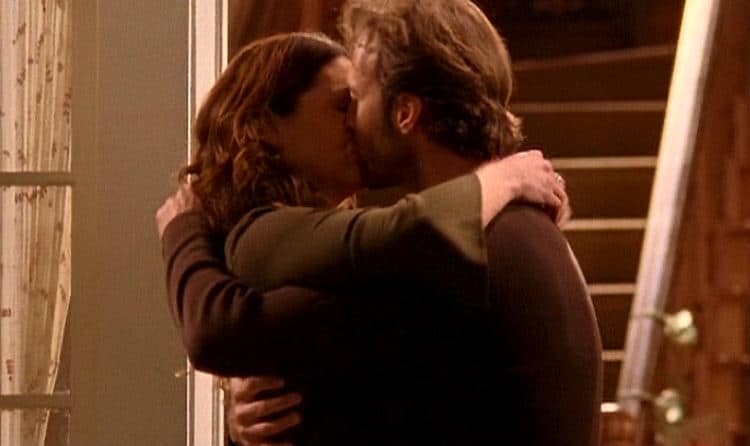 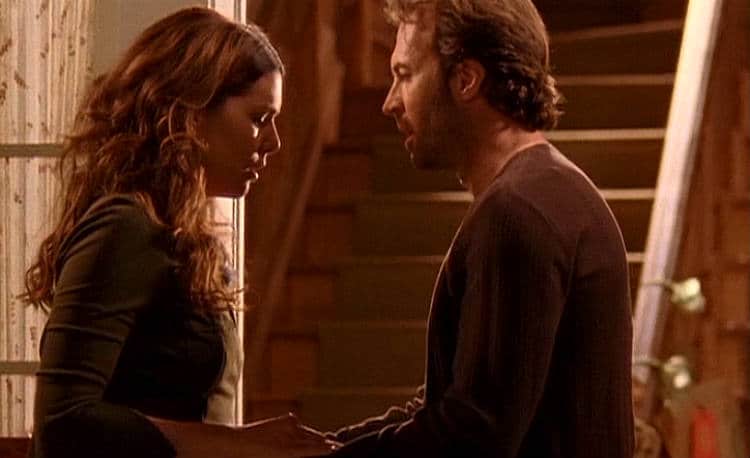 Then, she steps forward leaning in. 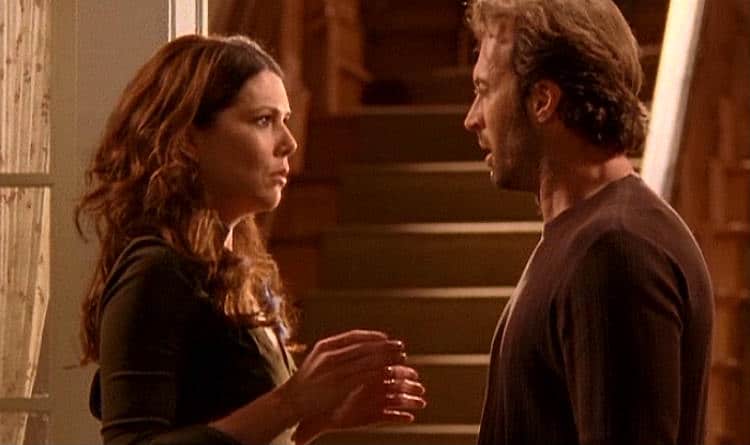 Quietly, she repeats, “would you just stand still?”

They come together again for their second first kiss. The first being Luke’s initiation, the second Lorelai’s. (Trust me, this can be a thing though probably only something Gilmore Girls could do.) 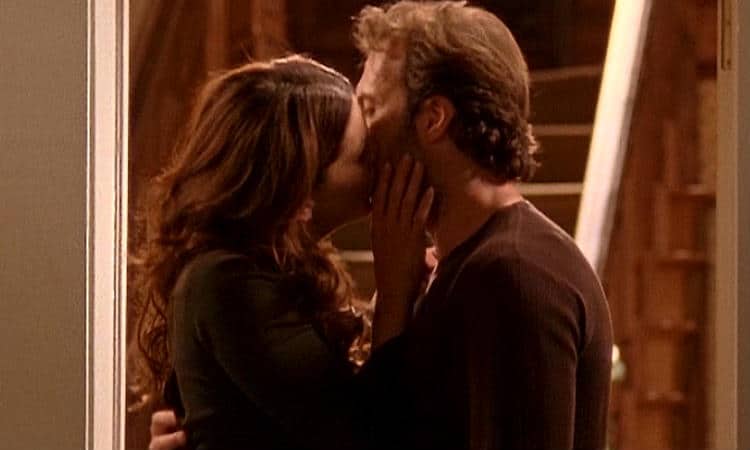 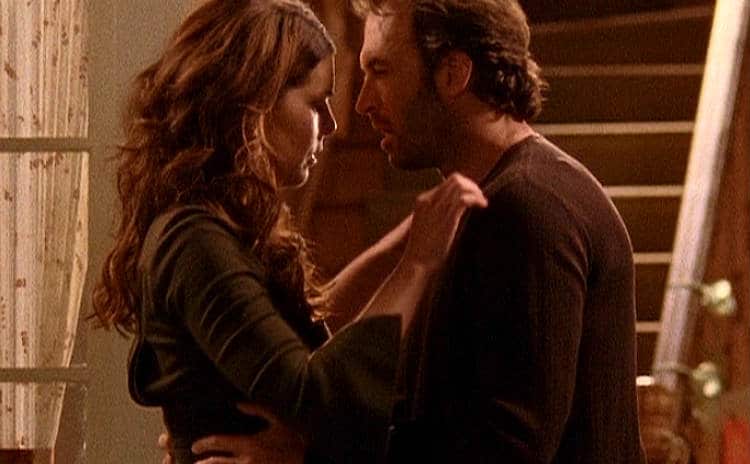 Though their story is far from over, as they stand in the doorway kissing, for the moment, an image of happiness is present. It’s definitely one of the best moments of the entire show, and certainly one of the best kisses ever!

Have you watched Gilmore Girls? What’s your favorite Luke and Lorelai moment? Are you excited about the Netflix revival and the idea of more Luke and Lorelai scenes? Comment down below with any thoughts you have. I’d love to read your comments.

Our romance-themed entertainment site is on a mission to help you find the best period dramas, romance movies, TV shows, and books. Other topics include Jane Austen, Classic Hollywood, TV Couples, Fairy Tales, Romantic Living, Romanticism, and more. We’re damsels not in distress fighting for the all-new optimistic Romantic Revolution. Join us and subscribe. For more information, see our About, Old-Fashioned Romance 101, Modern Romanticism 101, and Romantic Living 101.
Pin this article to read later! And make sure to follow us on Pinterest.
By Rissi JC on February 13th, 2016