(I received a free copy of Carnegie’s Maid from the publisher, Sourcebooks Landmark, to write an honest review. I was not financially compensated for this post and all opinions are my own.)

Official Synopsis of Carnegie’s Maid: Clara Kelley is not who they think she is. She’s not the experienced Irish maid who was hired to work in one of Pittsburgh’s grandest households. She’s a poor farmer’s daughter with nowhere to go and nothing in her pockets. But the other woman with the same name has vanished, and pretending to be her just might get Clara some money to send back home.

If she can keep up the ruse, that is. Serving as a lady’s maid in the household of Andrew Carnegie requires skills she doesn’t have, answering to an icy mistress who rules her sons and her domain with an iron fist. What Clara does have is a resolve as strong as the steel Pittsburgh is becoming famous for, coupled with an uncanny understanding of business, and Andrew begins to rely on her. But Clara can’t let her guard down, not even when Andrew becomes something more than an employer. Revealing her past might ruin her future — and her family’s.

With captivating insight and heart, Carnegie’s Maid tells the story of one brilliant woman who may have spurred Andrew Carnegie’s transformation from ruthless industrialist into the world’s first true philanthropist. 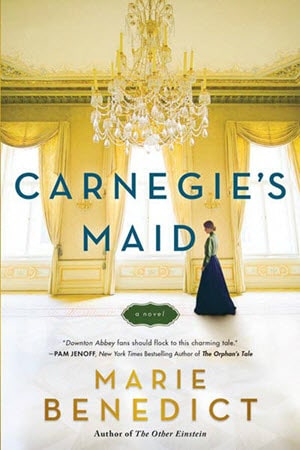 Author Marie Benedict (The Other Einstein) returns with another imaginative novel exploring the idea a woman was the influence behind one of America’s greatest philanthropists. What if Andrew Carnegie fell in love with a servant? And what if that servant so profoundly influenced him that he would attempt to spend his entire wealth on charitable endeavors? Told from Clara Kelley’s perspective, Carnegie’s Maid is an intriguing mix of fact and fiction that tells such a tale.

The entire story rests on the shoulders of Clara Kelley. As a result, she is the most well-rounded, layered character in Carnegie’s Maid. As a newly arrived Irish immigrant, Clara’s gumption and resourcefulness quickly make her indispensable to the Carnegie matriarch. She hides her fear and her very identity behind a placid expression of servitude. There is no one that knows her secret. As a result, there is a sense of crushing loneliness that surrounds Clara.

Lifting this isolation is Clara’s natural curiosity. Her unconventional upbringing in Ireland gave her a broader view of the world. While her focus was typical of immigrants of that time period (sending money home to help her family), her approach to how she could help them was anything but typical. She listened to the conversations between Margaret and her son, Andrew. As a result, her inquisitive mind captures Andrew’s interest and he draws her out further.

An Unlikely Romance – A Wealthy Scottish Immigrant and an Irish Maid

There was a very real danger for Benedict to fall into the romance novel “master of the house falls for a servant” trope. Fortunately, Benedict handles the developing feelings between Clara and Andrew with the kid gloves it deserves. I found it to be a gentle, evolving regard.

There were no flashes of lightning or love at first sight narratives. Rather, it was sweet and a meeting of inquisitive minds. Andrew recognized Clara’s loneliness and he gently coaxed her into talking about herself. Further, Andrew saw something of himself in Clara; a reminder of his own humble beginnings.

“Our exchange was so fresh and natural, I nearly laughed and dissuaded him of his false beliefs.
Nearly. Then I recalled the Clara Kelley I was meant to be and settled on a vague statement.”

Yet, Clara, while enjoying these easy conversations, never forgets what she is hiding. Nevertheless, she can’t resist Andrew’s allure. Soon, Andrew and Clara move from general conversation to discussing business. Benedict weaves Clara in seamlessly with Andrew Carnegie’s business history. Clara’s influence slowly begins to take root. The two grow closer as Andrew teaches Clara business. In turn, she provides another viewpoint. Even so, the social gulf between them never lessens. It’s this balance that keeps the romance in Carnegie’s maid from becoming cheap or “typical.”

Keep in mind, this is not a historical romance but rather historical fiction. While there is old-fashioned romance appeal, it is not the point. However, there is one particularly swoon-worthy romantic gesture and moment that my heart did sigh over!

I would love to see Carnegie’s Maid as a television movie or limited series. Imagine the elaborate costume designs! As well as set designs recreating the bygone era of the novel. Also, adapting the novel to film would allow for more factual history about Andrew Carnegie and his rise as the King of Steel. Not to mention the contrast of his rise with that of the everyday Irish immigrant in 19th Century Pittsburgh. I’m thinking Angela’s Ashes meets The Age of Innocence. Just go with me here!

I do wish we read more of Andrew Carnegie’s ruthless business side. The small glimpses from Clara’s perspective were just teased. I wanted to hear more of her thoughts on Andrew’s ruthless side and what that meant about her. Of course, as a Lady’s Maid, the glimpses we did see were likely typical of what a maid would see. It’s not like Clara was trotting off to the offices with Mrs. Carnegie.

I also felt the ending dropped on me unexpectedly. On the flip side, that very well could be because I didn’t want this story to end! In addition, enhancing Clara’s story were wonderfully developed secondary characters. From her cousins toiling in the slums of Pittsburgh to an escaped slave desperate search for his family, these smaller stories add depth as Clara begins to fully understand her place in America.

Carnegie’s Maid is an excellent book. It is a well-written story of “what if” that captures the imagination. Tuck this book in your commuter bag or carry-on and enjoy!

Carnegie’s Maid is available at your favorite bookstore or online retailer.

Have you read Carnegie’s Maid? What did you think? Sound off in the comments below!

Our romance-themed entertainment site is on a mission to help you find the best period dramas, romance movies, TV shows, and books. Other topics include Jane Austen, Classic Hollywood, TV Couples, Fairy Tales, Romantic Living, Romanticism, and more. We’re damsels not in distress fighting for the all-new optimistic Romantic Revolution. Join us and subscribe. For more information, see our About, Old-Fashioned Romance 101, Modern Romanticism 101, and Romantic Living 101.
By Catherine on January 25th, 2018