(I received a free copy of The English Wife from the publisher, St. Martin’s Press, to write an honest review on The Silver Petticoat Review. I was not financially compensated for this post and all opinions are my own.)

Official Synopsis of The English Wife: Annabelle and Bayard Van Duyvil live a charmed life in New York: he’s the scion of an old Knickerbocker family, she grew up in a Tudor manor in England, they had a whirlwind romance in London, they have three year old twins on whom they dote, and he’s recreated her family home on the banks of the Hudson and renamed it Illyria. Yes, there are rumors that she’s having an affair with the architect, but rumors are rumors and people will gossip. But then Bayard is found dead with a knife in his chest on the night of their Twelfth Night Ball, Annabelle goes missing, presumed drowned, and the papers go mad. 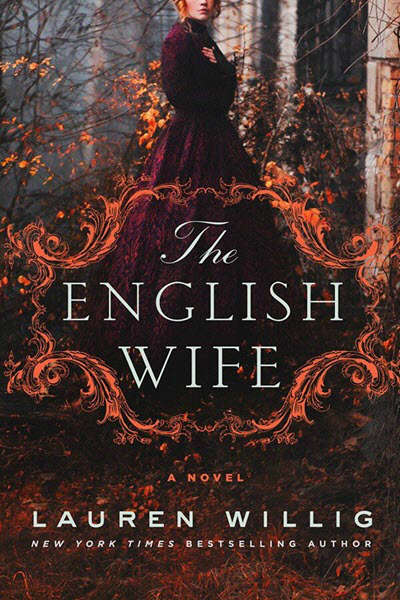 Fans of New York Times bestselling author Lauren Willig’s Pink Carnation series will adore this stand-alone romantic mystery. I adored this mystery. It is everything you want in a tale of intrigue, murder, and yes, romance!  Set during the Gilded Age, The English Wife moves between New York and London. The luxuries of society are on full display. Mansions, jewels, gowns, and other glaring riches compete with gossip and scandalous secrets. Old society battles with the nouveau riche. Of course, the Van Duyvil’s are very much of the old society. Ruled by the family matriarch, the Van Duyvil’s appear the perfect family on the surface.

It’s impossible for me to say anything at all about the mystery without completely spoiling the book. For this reason, I will only say it will keep you guessing. Willig’s ability to misdirect the reader is flawless. Filled with twists and turns, every time you think you figured out “whodunnit,” Willig throws another curve ball. She stays far enough away from the line of confusion, yet still manages to spin you in circles. You will rack your brain until the very end. Meanwhile, you will also fall in love with Janie Van Duyvil, the reserved and deceptively meek sister to Bay, and James Burke, the charming reporter with his own secrets.

Janie Van Duyvil is not what you would expect in a heroine. She is quiet and unassuming. A wallflower. She spends her days under the thumb of an overbearing mother, stifling her natural impulses. Janie does not rock the boat. Even after Bay’s death, she remains meek; at least, on the surface. Straight away, Janie realizes they all need answers about the deaths of Annabelle and Bay. As unobtrusive as Janie is, she is not unaware. Consequently, her quiet and unassuming nature makes her the perfect heroine in The English Wife. My one gripe about Janie is that she never truly finds her voice when it comes to her mother. I kept waiting for that one moment and it did not quite get there. Notwithstanding Janie’s reticence, she does come into her own.

Related Post | The American Heiress: A Gilded Age Romance for Fans of Victoria and Downton Abbey

James Burke is Janie’s opposite in every way. A reporter with no social status, he is everything Mrs. Van Duyvil abhors. He is common and a member of the rabble. Nevertheless, Janie finds him fascinating. And, not a little bit alluring! James, on the other hand, can’t help but admire Janie. Her quest for the truth about Annabelle and Bay’s deaths surprises him. In his experience, high society does not seek the truth and more often than not, skirts it. This prejudice causes him to stumble here and there with Janie. At the same time, her own preconceptions of the working class cause Janie to stumble as well. I found James and Janie’s discussions on class particularly intriguing. They don’t shy away from calling the other out on their ignorance. However, while Janie acknowledges her privilege, it takes James some time to see beyond Janie’s last name.

Romance weaves through the story and is very much a part of the mystery of Annabelle and Bay’s death. I loved the reactions of the characters when they realized their hearts belonged to another. Willig balances the passions of her characters beautifully with their motivations. Romance – love – bridged class differences. Love, or rather, what one would do for love, led to questionable choices. While I felt more time could have been spent exploring James and Janie’s differences, especially as Annabelle and Bay’s story unfolds, other aspects of the story fill that gap.

I think what readers will find most intriguing about Janie and James is their uncommon ability to understand the other despite their differences. From the beginning, they have a connection. Their agreement to work together centers around their promise to tell the truth. That promise is the very foundation of their relationship. When tested, both struggle to find that common ground again. That place where they understood each other perfectly. As a result, there is a hint of angst that will touch your heart.

Final Thoughts on The English Wife

Can I take a minute and talk about this cover? It’s gorgeous! The cover alone would draw me to this book on any shelf. The rich, bold color are in keeping with the age of excess of the time period. Conversely, the background is stark, depicting the winter setting. It hints at the darkness of the murder mystery. I loved this contrast and found it intrigued me as much as the synopsis of the novel. I cannot recommend The English Wife enough. It is absolutely fantastic. Filled with secrets, it will leave you gasping at the end and wondering what in the world just happened!

Are you a fan of Lauren Willig? Looking forward to her new novel? Well, grab your copy of The English Wife today and tell me what you think in the comments below!

Content Warning: There are sexually suggestive moments as well as the implication of a non-consensual encounter. However, the book is not graphic or explicit.

You can the book on Amazon and other online local bookstores. The title was just released on January 9, 2018.

Our romance-themed entertainment site is on a mission to help you find the best period dramas, romance movies, TV shows, and books. Other topics include Jane Austen, Classic Hollywood, TV Couples, Fairy Tales, Romantic Living, Romanticism, and more. We’re damsels not in distress fighting for the all-new optimistic Romantic Revolution. Join us and subscribe. For more information, see our About, Old-Fashioned Romance 101, Modern Romanticism 101, and Romantic Living 101.
By Catherine on January 10th, 2018