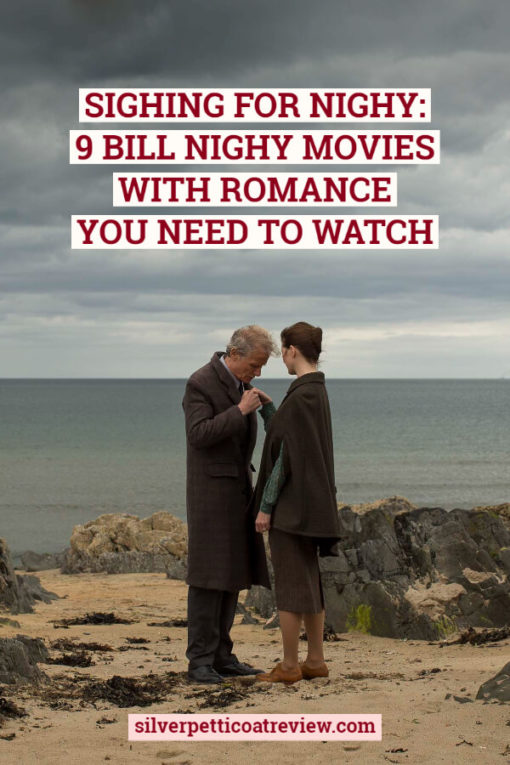 Ahead of this month’s new adaptation of Emma, we’ve compiled a list of some of the best Bill Nighy movies with romance to watch.

Are you sighing for Nighy? Got a thing for that twinkle-eyed actor, always looking so cool? Love a man who makes you laugh? Does dry wit make you weak in the knees? Look no further.

In anticipation of the latest film adaptation of Jane Austen’s Emma, an adaptation starring Bill Nighy as Emma’s father, Mr. Woodhouse, it’s time to look at some other Bill Nighy movies. He’s an actor who steals every scene he’s in, who never ceases to entertain, and I am so looking forward to his portrayal of Mr. Woodhouse.

RELATED: WATCH THE NEW EMMA TRAILER (2020): FULL OF HUMOR AND A PROMISING CAST

So, I’ve assembled nine Bill Nighy movies, from cameos to supporting to full-on leading roles, all with a good dose of romance. And laughs, naturally.

Bill Nighy’s the time-traveling dad in this romantic dramedy by Richard Curtis. He’s loving and wise, counseling his son (Domhnall Gleeson) in the ins and outs of time travel, physically and emotionally. His character is truly a supportive role in this film, and the film reaches the emotional climax of the film when he is no longer there.

When his son Tim must learn that you only live life once, no matter how much you can travel in time and live it over and over. So, it’s about noticing the sweetness here and now and today.

Where to Watch: Netflix. You can also rent or buy on Digital and DVD.

Bill Nighy costars in these ensemble tours de force as the laidback and astute and witty Douglas Ainslie, unhappily married to the domineering and perennially sour Jean (Penelope Wilton). They’ve moved to India for an affordable retirement along with an array of other Brits.

At the Best Exotic Marigold Hotel, he befriends the widow Evelyn (Judi Dench). And their developing relationship – first as friends and maybe something more – is one of the endearing and engaging romantic threads through these movies.

Bill Nighy plays the washed-up, pretentious actor Ambrose Hilliard in this romantic dramedy. And in his supporting role, he sings one of the loveliest folksongs out there, “Wild Mountain Thyme,” as you can cut the romantic tension between the two leads, played by Gemma Arterton and Sam Claflin.

Content Note: Rated R for some language and a scene of sexuality.

Bill Nighy is the incorrigible, rock-’n’-roll has been Billy Mack in this Christmas classic by Richard Curtis. Many story threads weave this all-star cast together, but it’s Billy Mack’s yuletide remake of “Love is All Around” that seeps through all of them.

It’s the surprise radio plague of the holiday season, which has Billy Mack acting even more outrageous and obstinate and arrogant than usual, much to the eternal exasperation of his longsuffering manager Joe (Gregor Fisher).

Where to Watch: HBO. You can also rent or buy on Digital and DVD.

Bill Nighy has a supporting role in this comedy as the arch-rival hairdresser Ray Robertson. He’s ruthless and flamboyant, challenging his main competitor Phil Allen (Alan Rickman), at every turn.

Phil’s been pulled out of retirement for one last hairdressing competition, a cooperative project that might just heal the rifts between his son (Josh Hartnett), his ex-wife (Natasha Richardson), and her current partner (Rachel Griffiths).

So, a broken family needs to rally around the hair salon to beat the arrogant Ray and find each other once again. And Ray’s daughter (Rachael Leigh Cook) and Phil’s son have got eyes for one another. It’s brilliant, funny, funny stuff.

Where to Watch: Hoopla. You can also rent or buy on Digital and DVD.

RELATED: I CAPTURE THE CASTLE – A WHIMSICAL FAIRYTALE ADAPTATION

Bill Nighy is the eccentric dad, with a bad case of writer’s block, in this coming-of-age tale. James Mortmain had a bestseller twelve years prior and hasn’t written a word since. Their genteel home is decaying around them.

James’s daughters are seeking salvation and escape from this existence, and that salvation just might come in the form of rich American brothers. Romola Garai, Rose Byrne, Tara Fitzgerald, Henry Cavill, and Henry Thomas all costar in this wacky and wonderful coming-of-age tale.

Where to Watch: Prime Video, Hoopla, Vudu, Kanopy. You can also rent and buy on Digital and DVD.

Content Note: Rated R for brief nudity. This movie should be PG-13.

Bill Nighy has a cameo role as Hephaestus in this fantasy action-adventure epic, a sequel to Clash of the Titans (2010). He plays a pivotal role in Perseus’s quest to enter Tartarus and slay Kronos.

Only Hephaestus knows the way, and he will do all in his power to ensure that Perseus (Sam Worthington) succeeds. Wrath of the Titans has an impressive cast, including Liam Neeson, Ralph Fiennes, Rosamund Pike, Lily James, and Sinead Cusack.

RELATED: THE BOOKSHOP: A NEW OUTSTANDING PERIOD DRAMA TO WATCH

Bill Nighy has a supporting romantic role as the reclusive book lover Edmund Brundish. Bookshop owner Florence (Emily Mortimer) and her reclusive best customer connect over books, and a budding potential romantic relationship is almost there.

But other elements in the village want the bookshop gone and are doing everything to undermine Florence’s business. Edmund takes up Florence’s cause, rising to her defense, and it costs him dearly. Sniff, sniff.

Where to Watch: Prime Video, Kanopy, Hulu, and EPIX. You can also rent or buy on Digital and DVD.

And their socially awkward courtship then begins, with Lawrence inviting Gina to come with him to a G8 summit, where he is with the British delegation. But the idealistic Gina is having problems with the bureaucracy that seems to sidestep serious issues on this planet. She wants to confront the British delegation, much to Lawrence’s chagrin and opposition.

The Girl in the Café is a thought-provoking and award-winning film with strong performances and great chemistry between our leads.

Do you have a favorite Bill Nighy movie? Are you excited about the new Emma adaptation? Let me know in the comments below!

8 thoughts on “Sighing for Nighy: 9 Bill Nighy Movies with Romance You Need to Watch”