Based on a historical fiction novel by Lissa Evans, Their Finest is a brilliant new British period drama that somehow never received the attention and promotion it deserved. With only a brief limited release in the U.S earlier this year, the film fell under the radar. However, now that it’s available on DVD and Digital, more people should check out this wonderful film with a fantastic cast that is part Romantic Drama, part War Drama, and part Comedy.

The Story – Their Finest

Set in London 1940 during the Blitz, Their Finest tells the story of Catrin Cole (Gemma Arterton), a former secretary who receives a job as a new screenwriter for propaganda movies because they need someone who understands how to write “women” dialogue. Her screenwriting partner is the cynical but talented Tom Buckley (Sam Claflin) who takes a while to warm up to (hint: you definitely do) and they’ve been tasked to write a new uplifting movie about Dunkirk that will inspire the war efforts and unite the country in the midst of harsh times.

Despite the tragedy around her, Catrin finds she loves her new job as a writer and embraces her talent which means pulling away from her selfish significant other (Jack Huston).

Besides Catrin and Tom, other noteworthy characters include scene-stealer Bill Nighy as Ambrose Hilliard, a washed up and aging movie star, Rachel Stirling (The Bletchley Circle) as the tough but fair feminist boss Phyl Moore, and Jake Lacy as Carl Lundbeck, an American war-hero who the producers want in the film despite his poor acting. In smaller roles, you’ll also find great talent including Jeremy Irons, Richard E. Grant, Eddie Marsan and Helen McCrory.

“A lot of men are afraid we won’t go back into our boxes.” – Phyl Moore

One of the aspects I loved about the film was the female focus and how it promotes women as filmmakers. The female characters have their chance to get their foot in an industry during the war when previously they wouldn’t have been able to. In fact, the character of Catrin is inspired by the real-life Welsh screenwriter and playwright, Diana Morgan which makes the character of Catrin all the more intriguing.

I also loved the slow-building romance between Catrin and Tom. The characters together make perfect sense and the chemistry between actors believable. You’ll easily root for these two to be together. Though at the end of the day, I think Catrin embracing her love for writing as a career has more significance than the actual love story. But make no mistake, this film is a romance. 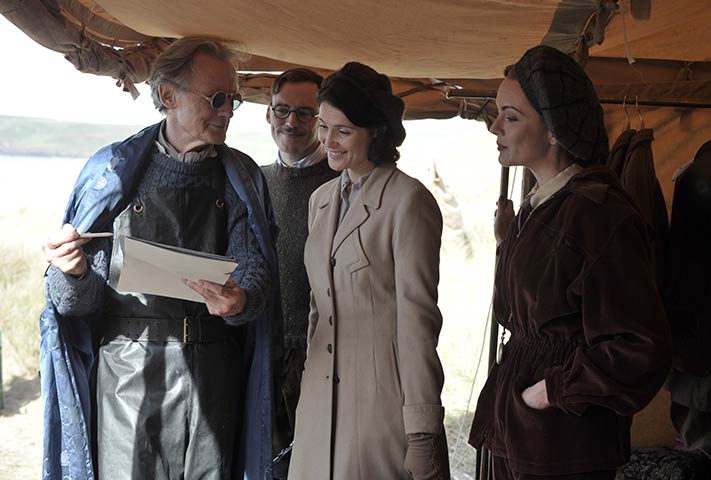 And while all the performances are great, the true standouts are Gemma Arterton and Bill Nighy who both give some of their best performances to date. Nighy, for instance, has a couple goosebump-worthy scenes with literary dialogue that will make you wonder why he’s not receiving any awards.

Overall, if you enjoy stories like The Guernsey Literary and Potato Peel Pie Society, romantic war period dramas with a touch of humor, or even Old-Hollywood, you should enjoy Their Finest. In some scenes you’ll find yourself laughing, in others, crying. And with a clever script, wonderful performances, fantastic production design, and a memorable romance, Their Finest is sure to entertain.

Content Note: Rated R but mild. There is a brief sex scene with nudity when a character finds someone cheating. And there are about 4 F-words.

Where to Watch: Their Finest is available to stream on Hulu. You can also rent/and or buy on Amazon, Youtube, Vudu, Google Play, and iTunes.

Have you seen Their Finest? Do you want to? Share your thoughts on this period drama in the comments below!

Our romance-themed entertainment site is on a mission to help you find the best period dramas, romance movies, TV shows, and books. Other topics include Jane Austen, Classic Hollywood, TV Couples, Fairy Tales, Romantic Living, Romanticism, and more. We’re damsels not in distress fighting for the all-new optimistic Romantic Revolution. Join us and subscribe. For more information, see our About, Old-Fashioned Romance 101, Modern Romanticism 101, and Romantic Living 101.
By Amber Topping on November 28th, 2017