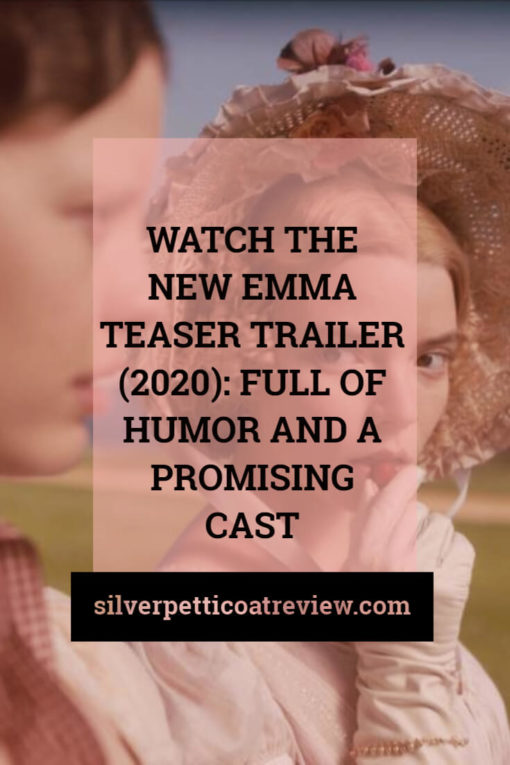 Just yesterday, it seems we had yet another adaptation of Jane Austen’s Emma. However, ten years later, here we are yet again. And in advance of the February 21st US release (the UK on the 14th), Focus Features just released their first teaser trailer of Emma, and it is hilarious!

Now, we’ve had several versions of Jane Austen books these past 25 years. (The 2009 romantic interpretation of Emma close to perfection thanks to the spot-on casting.)

However, all previous adaptations of Emma (while still witty and ironic), focus more on romance than Austen’s comedy skills. So, the door is wide open for a new, absolutely satirical interpretation.

And, thanks to the comedic dream team including Miranda Hart as Miss Bates, Bill Nighy as Mr. Woodhouse, and Josh O’Connor as Mr. Elton, that ironic adaptation has likely arrived. Their very presence promises an entertaining satire sure to enter into our collection of Austen favorites.

Other cast members of the new Emma (2020) include new period drama favorite Anya Taylor-Joy (The Miniaturist) born for the role of Emma and Johnny Flynn (2018 Vanity Fair‘s William Dobbin) as Mr. Knightley.

Jane Austen’s beloved comedy about finding your equal and earning your happy ending is reimagined in this delicious new film adaptation of EMMA. Handsome, clever, and rich, Emma Woodhouse is a restless queen bee without rivals in her sleepy little town. In this glittering satire of social class and the pain of growing up, Emma must adventure through misguided matches and romantic missteps to find the love that has been there all along.

Thanks to the comedic trailer, I’m obsessed. When Miranda Hart taps on Emma’s carriage and says, “such news,” I laughed. That is so her and Miss Bates at the same time.

Meanwhile, the other scene-stealer is, of course, Bill Nighy with killer facial expressions recalling Hugh Laurie’s underrated performance in Sense and Sensibility. And I never thought anyone could surpass Michael Gambon in this role!

On a different note, Autumn’s directorial vision mesmerizes with an original tone in the few available scenes selected from the well-edited trailer. There is a quality here reminiscent of the 1999 Mansfield Park I find surprising.

While not 100 percent faithful to Austen’s novel, the spirit captured Jane’s satirical writing style with perfection. I hope Autumn pulls that off here. Indeed, the filmmaking looks high caliber with excellent set design and beautiful costumes.

Finally, let’s talk about the romance of Jane Austen’s iconic love story. It’s here I have my doubts. For instance, I’m not sure I sense much personality from Mr. Knightley or even any chemistry between the leads.

But this is just a short teaser. So, hopefully, the short clips are misleading. Plus, the rest of the trailer is super intriguing. I know I can’t wait until February.

What do you think about the new Emma set for release next year? Do you like the cast? The humor? The new Emma and Mr. Knightley?