Have a secret, literary pleasure for domineering, Byronic, vampiric men? Enjoy magical realms hiding in plain sight – full of daemons and witches and vampires and ancient clashes and blood covenants and all the rest? Are star-crossed lovers your thing? Did you race through the Harry Potter series more than a few times? Did you read Twilight multiple times despite that fact that you’re a middle-aged, educated woman who recognizes all the signs of obsessive, stalker behavior?

Yeah, if you’re answering yes to any of those questions, Deborah Harkness’s historical fantasy All Souls Trilogy might just be something for you. The three books follow the story of Diana Bishop. She’s a rather reluctant witch, who’s an academic much more at home in the library stacks than brewing up a potion in a cauldron. But when something so earth-shatteringly magical happens, there are serious, life-altering repercussions for our professor. The tenured historian faces her magical heritage and accepts and acknowledges and harnesses her powers to survive the present and create a new future for creatures of all kinds.

And, oh yeah, there’s an uber-sexy vampire glowering in the shadows of the All Souls Trilogy. But creatures are never to mix. It’s against the covenant. So, is there a place anywhere on this globe for a witch and her vampire, for a vampire and his witch? 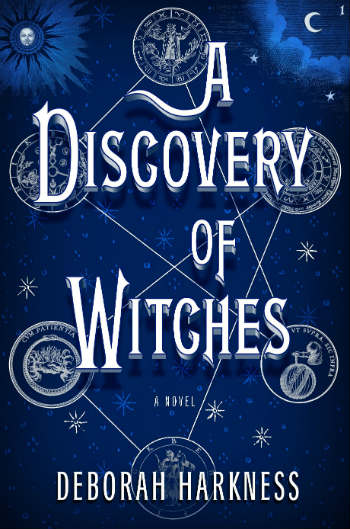 A historical expert in alchemy and the history of science, Dr. Diana Bishop is a visiting scholar at Oxford University. Sitting in the Bodleian Library one day, doing research on alchemical illustrations, she picks up an ordered manuscript, Ashmole 782, that gets her witchy sense tingling. Although sensing great magic at play within the manuscript’s ancient pages, she turns off her magic senses and examines the work as a historian. She then sends it back.

Little does she know that there was greater magic at play than she realized. Ashmole 782 has been lost for centuries, and witches, daemons and vampires alike all see it as a holy book, the origin of their species, the book of life, the first book of spells.

All want it for their own ends. And they all now converge on Oxford, on the Bodleian, and on our reluctant witch, who finds herself the center of much magical, daemonic and vampiric attention.

And not all the attention is kindly or just curious. Malevolent forces want to get their hands on the manuscript, and they don’t balk at kidnapping, torturing, maiming, killing to do it. Diana’s clueless, having long denied all things magical and has no idea how or why she could call forward and open this lost book. Which – after she sent it back – is now lost again.

To her aid, quite unexpectedly and uncharacteristically, comes the dashingly beautiful geneticist, Dr. Matthew Clairmont, a 1500-year-old vampire. Dr. Clairmont researches the genetic make-up of creatures, trying to find out why creatures are slowly dying. Vampires are having trouble turning/siring others. Witches have been steadily losing their powers through the generations. And daemons’ genius is increasingly descending into outright madness. Something is amiss on a genetic level for creatures all over the globe.

Partnered Up in Tried and True Tropes

Partnered up to discover the secrets of Ashmole 782, Matthew and Diana are an unlikely duo, one that gets more than a few hackles up. A witch cavorting with a vampire. A vampire protecting a witch. Egads! And the three tomes (these are big books!) essentially follow their partnership, as they seek to uncover the mysteries of the past, unravel the secrets of Ashmole 782, and chart a course for the future.

Book One, A Discovery of Witches, is a classic first installment, a woman discovering that she has powers, powers that she has no control over, in a world that she doesn’t yet understand. Book Two, Shadow of Night, is the magical training of Diana Bishop. The witch needs to come into her own, to discover and harness her full potential. She heads into the past, to Elizabethan England, to do just that. And Book Three, The Book of Life, is the big showdown, where our hero and heroine face their enemies.

Diana and Matthew zip around the globe – vampires are always unimaginably wealthy – from France to New England, from Yale to Oxford, from the past to the present. They get embroiled in vampire familial obligations and hierarchies. They get entangled in intra-witch aggressions. Not to mention, that those dear to them are threatened and in danger because of them. They hang with Elizabethan royals, meet Kit Marlowe, feed lines to Shakespeare…

Yes, it is a rich and detailed world of the extraordinary that Deborah Harkness creates in the All Souls Trilogy. And she’s using some very well-used and well-known tropes to do it. So, it’s not groundbreaking literature, but it is pretty darn fun.

Deborah Harkness is herself an academic, a professor of history, specializing in the history of science. So, while the tropes may be tried and true, it’s Harkness’s great historical knowledge that is truly insightful and engaging. Book Two is especially a delight when our vampire-witch duo time walk to the 16th century to Elizabethan England. And the historian’s knowledgeable eye for detail really comes to shine.

Content Note: There are a handful of steamy scenes in the All Souls Trilogy between our witch and vampire. They do have sex, but the descriptions aren’t too graphic, and the sex aspect doesn’t take over the book.

Adaptation Recommendation: An eight-episode miniseries of the first book, A Discovery of Witches, is airing right now on Sky One in the UK. It debuted on the 14th of September and stars Teresa Palmer as Diana Bishop and Matthew Goode as Matthew Clairmont. Here’s hoping that it gets picked up by a streaming service everywhere, so those of us in other parts of the world can give it a watch.

Note: It will be available in the US to stream on Sundance Now and Shudder in early 2019. Deborah Harkness was also wonderful enough to list airdates (when available) and channels/streaming services the show airs in each country. I’m sure she’ll continually update with new information.

What are your thoughts on the All Souls Trilogy? Are you excited for the new show? Sound off below…

Our romance-themed entertainment site is on a mission to help you find the best period dramas, romance movies, TV shows, and books. Other topics include Jane Austen, Classic Hollywood, TV Couples, Fairy Tales, Romantic Living, Romanticism, and more. We’re damsels not in distress fighting for the all-new optimistic Romantic Revolution. Join us and subscribe. For more information, see our About, Old-Fashioned Romance 101, Modern Romanticism 101, and Romantic Living 101.
Pin this article to read later! And make sure to follow us on Pinterest.
By Jessica Jørgensen on October 2nd, 2018