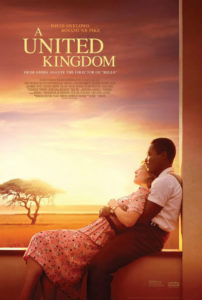 If you blinked, you probably missed A United Kingdom while in theaters. But the good news is that you can now discover this beautiful period drama in the comfort of your home. From the director of Belle (another remarkable period romance), comes a film about overcoming all obstacles for both love and a nation.

Based on a true story, a British white woman falls for the King of Bechuanaland (before it became Botswana), while he studied law in England soon after World War II. While Ruth Williams (Rosamund Pike) attends a missionary dance, her life changes upon meeting the charismatic Seretse Khama played by the equally charismatic David Oyelowo. She soon discovers, however, that this African man also just happens to be a King. Because that happens all the time…

From there, everything stacks against these two, especially from the British government who oppose their union. The leaders of England and South Africa will do anything and everything to keep the two apart. Their interracial marriage just wasn’t what the political agendas (think apartheid) had in mind. Not to mention, their families don’t love the idea either. But in this true story, love conquers all.

They fight for their love despite the intense interferences from both their families and countries. Even the infamous Winston Churchill stood against these two, breaking his promise to lift Seretse’s exile from his home country. Thankfully, if you know history, you know how this inspiring love story ends. 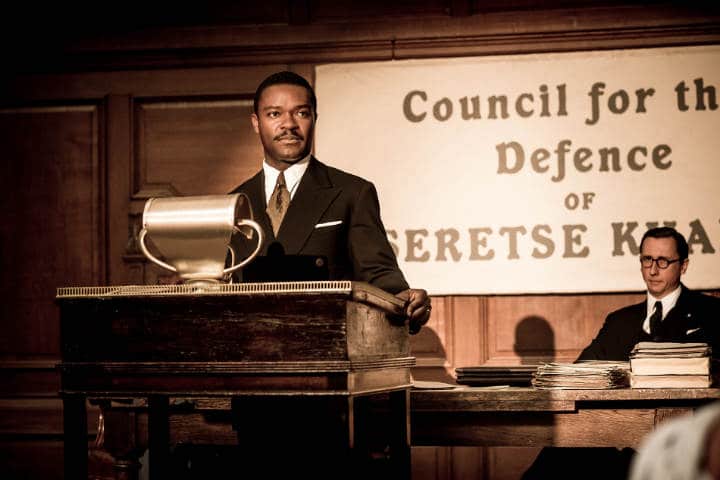 With amazing direction from Amma Asante (more period old-fashioned romances from her would be welcome) and a stunning screenplay from Guy Hibbert, A United Kingdom definitely stands out as one of the best love stories of the year thus far. Indeed, the true romance of Seretse and Ruth marks their love as one of the most romantic of the entire 20th century.

Telling their story needed to happen and I’m thrilled the story fell under the capable hands of Asante who knows how to do romance right. With graceful ease, she hones in on the small moments: a dance, a touch of the hand, an intense look of love; everything needed to create an atmospherically perfect period romance. And what makes A United Kingdom even stronger as a romantic film, is that the story talks about more than just the romance. Indeed, romance in the midst of social issues like apartheid, social justice, and racism, emphasizes the love between Seretse and Ruth to an even greater and more emotional degree. A love story that makes you feel emotion without being preachy is a winner in my book.

RELATED | Romantic Moment of the Week: Belle and Mr. Davinier 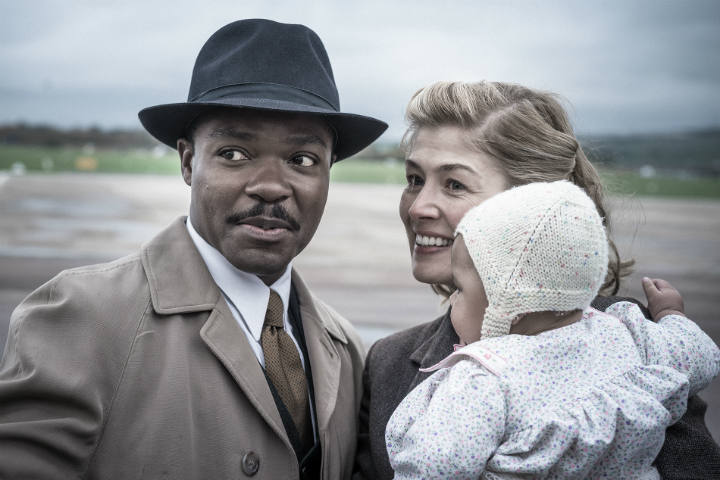 And I would be remiss to not mention the performances from a fantastic cast. David Oyelowo plays Seretse with such conviction and authenticity, that you understand why Ruth would follow him all the way to Africa. Of course, Rosamund Pike is brilliant as usual, her chemistry with Oyelowo a beautiful thing to see unfold onscreen. A few other familiar faces also make their mark. From Jack Davenport (Pirates of the Caribbean), Tom Felton (Harry Potter), Laura Carmichael (Downton Abbey), to David Oyelowo’s real-life wife Jessica Oyelowo, the entire ensemble harmoniously perform together to bring this true story to life. Overall, A United Kingdom is a gorgeous period romance to watch again and again. Do yourself a favor, and go watch this one.

Content Note: A United Kingdom is rated PG-13 for some language including racial epithets and a scene of sensuality (nothing explicit).

Where To Watch: You can rent A United Kingdom on Amazon or buy on Blu-ray and DVD.

Our romance-themed entertainment site is on a mission to help you find the best period dramas, romance movies, TV shows, and books. Other topics include Jane Austen, Classic Hollywood, TV Couples, Fairy Tales, Romantic Living, Romanticism, and more. We’re damsels not in distress fighting for the all-new optimistic Romantic Revolution. Join us and subscribe. For more information, see our About, Old-Fashioned Romance 101, Modern Romanticism 101, and Romantic Living 101.
Pin this article to read later! And make sure to follow us on Pinterest.
By Autumn Topping on September 16th, 2017