THE MOMENT: Belle and Mr. Davinier come together after social justice has been served.

Every once in a while, it is nice to go to the theater and watch a good, old-fashioned love story. With Amma Asante’s Belle, that is exactly what we got, and that is why I want to highlight this Austen inspired romance for this week’s romantic moment of the week while it is still in theaters. Inspired by a true story, Belle tells the tale of a mixed race child raised in England’s high society during the late 18th century. Because she is blood, her great-uncle Lord Mansfield, the Chief Justice of the land, agrees to raise her as one of his own, alongside another one of his nieces Elizabeth Murray. But because of the color of her skin, Belle could never be quite equal to the rest of the family. She must follow specific rules, such as not dining with her family’s guests. She is above the servants, yet below the rest of her family.

For a “Mulatto” during the time of slavery, Belle in comparison has quite the ideal life, however it is one raised in a sort of bubble from the rest of the world. At one point in the film, she even remarks that there is no one she can quite relate to. She is alone really, black surrounded in a world that is all white. 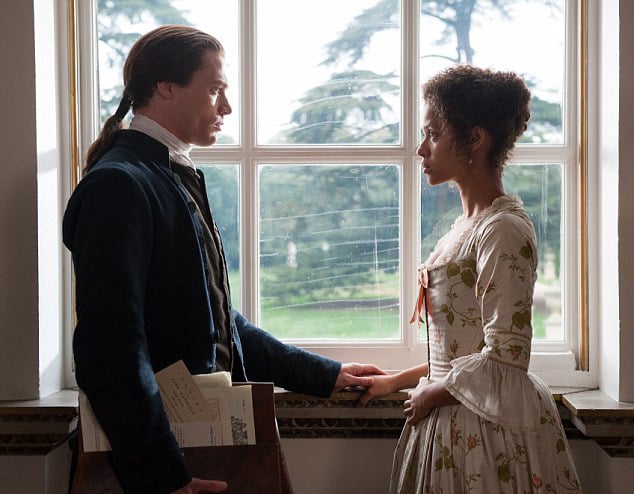 Every once in a while, it is nice to go to the theater and watch a good, old-fashioned love story.

Dido Elizabeth Belle is free and raised in love, and later even freed as a woman when her white father leaves her 2,000 pounds a year to live on. Nevertheless, when she meets John Davinier, a passionate Wilberforce type who sees her as an equal, her eyes becomes opened to the world and to the suffering of her people. Davinier is open with her about the topic of the law, including the famous Zong case in which her Uncle presides as the Judge. 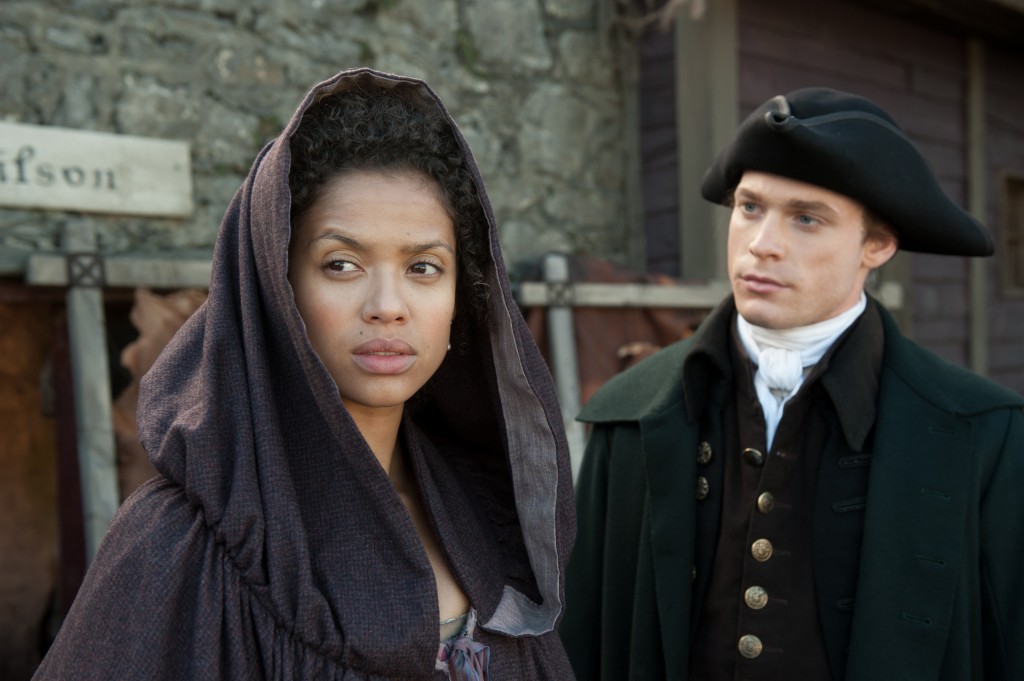 What I love about the Zong case is that it is through a social cause that the two (Davinier and Belle) come together. Call it the INFJ in me, but I loved the idealism in Davinier as he fought for what was right. For those unfamiliar with the Zong case and the film, in the movie (as the case is actually true) over a hundred slaves were killed while out at sea on a slave ship. The slave traders then wanted compensation (30 pounds per slave) by the insurance company, turning slaves into nothing more than insurable cargo. Hence the case, as the insurance company refuses to pay for the slaughter of slaves. Davinier believes it is a case of fraud, that the slave traders purposely had them die in order to get the money. Because Bellle’s uncle (adopted father really) presides over the case, Dido begins to sneak around and leak information to Davinier that proves the case is in fact a fraud, that the slavers had several opportunities to replenish their water supply at several different ports. 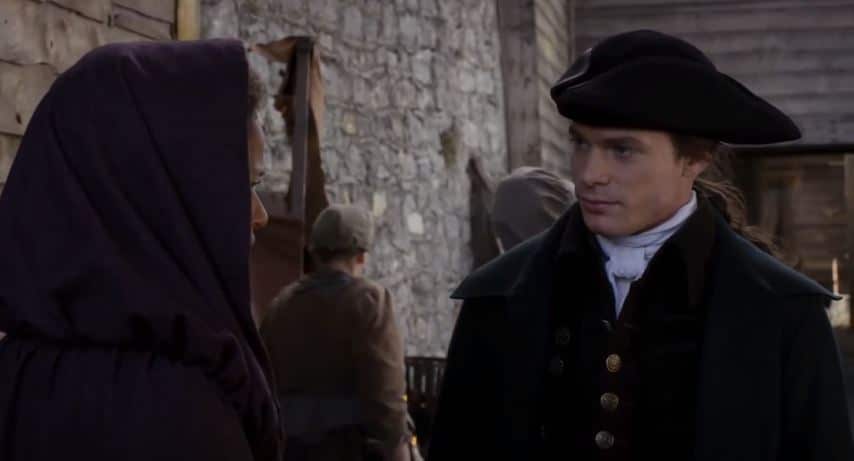 During their secret meetings, Davinier and Belle fall even more in love, Davinier’s feelings for Dido clearly evident on his face.

When the two are discovered by Lord Mansfield, their promise for a future seems bleak because he is not a gentleman (Mansfield earlier releasing Davinier as his pupil) and he will not see Belle with anyone but a gentleman. In fact, it would appear he would even prefer Belle remaining single due to her place in society. Although Belle does become engaged to another man during the film, it never feels like much of an obstacle, the main obstacle remaining with Mansfield who wants Davinier to have nothing to do with his beloved niece. He doesn’t like the ideas Davinier puts into her head for instance. But in many love stories, something has to catapult a change. The change begins after their meetings are discovered by Mansfield (Davinier passionately claiming how much he loves her in the process).

As the case comes ready for Mansfield’s judgment, the painting of Belle and her cousin-sister Elizabeth is unveiled, revealing that Dido was painted as an equal to her cousin, not as subservient as she feared (thanks to other paintings she saw growing up). This makes it known to Belle that she is the evidence of her Uncle’s convictions and further convinces him to rethink the Zong case. When the day arrives, she once again sneaks out, but this time to listen to the proceedings. Davinier stands in the crowd, thus beginning the romantic moment of the week.

In silence, Dido listens to her Uncle’s ruling. After much consideration (and listening to both Dido and John Davinier), he rules in favor of the insurers, citing that not only was the slavers’ actions not lawful, but it was also not right. Watching on, Belle smiles through her tears. 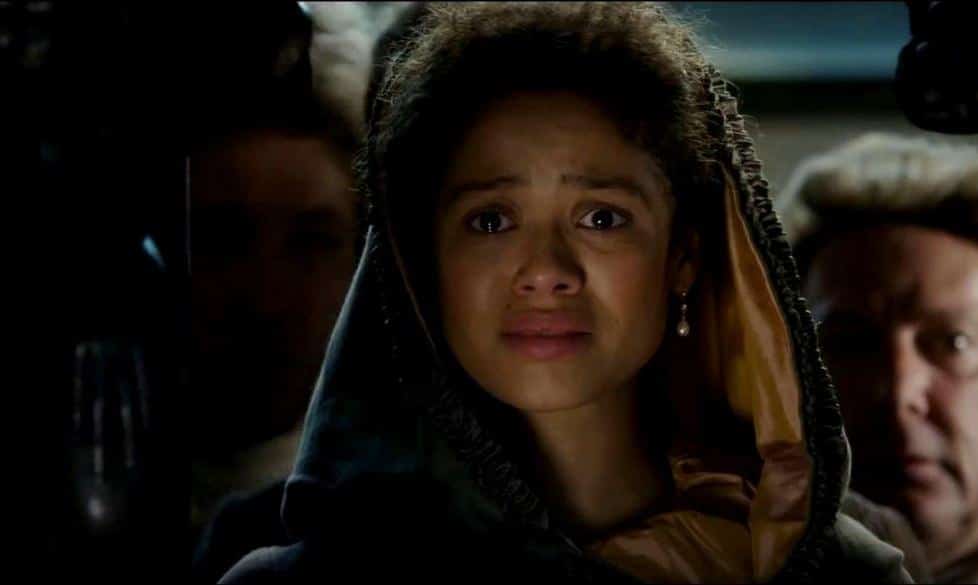 After the proceeding is over, she makes her way to Davinier in the crowd. Lord Mansfield watches their actions, clearly recognizing the truth of their love for one another. He finds them outside later hand in hand.

“I want nothing more than to be his wife,” Belle claims, clearly hopeful after his ruling, however he still does not wish her to be married to anyone but a gentleman. But that couldn’t be the end of it, right? If this is a Jane Austen inspired film (it is more than just a social movie), shouldn’t we get our Jane Austen happy ending?

With a smile, Lord Mansfield reveals that he will once again take Davinier as his pupil, to study under the law and therefore become a gentleman in the process. The two star-crossed lovers have received their permission. He leaves, leaving John Davinier and Dido Elizabeth Belle alone to reflect on their sudden good fortune.

“Could it be true?” Davinier asks her. At first, she believes he means only the case, but no he is talking about her feelings, that she would actually want to be his wife.

“I love you,” she claims wholeheartedly, and the two come together for a kiss, not caring they are in public.

It’s not like they follow the rules after all. Their love aims to break them in the midst of social justice finally beginning to sweep over the changing nation.

What did you think of Belle? Did you find the movie refreshingly and idealistically romantic? Sound off in the comments…

Check out my review of Belle.

Our romance-themed entertainment site is on a mission to help you find the best period dramas, romance movies, TV shows, and books. Other topics include Jane Austen, Classic Hollywood, TV Couples, Fairy Tales, Romantic Living, Romanticism, and more. We’re damsels not in distress fighting for the all-new optimistic Romantic Revolution. Join us and subscribe. For more information, see our About, Old-Fashioned Romance 101, Modern Romanticism 101, and Romantic Living 101.
Pin this article to read later! And make sure to follow us on Pinterest.
By Autumn Topping on June 7th, 2014

2 thoughts on “Romantic Moment of the Week: Belle and Mr. Davinier”