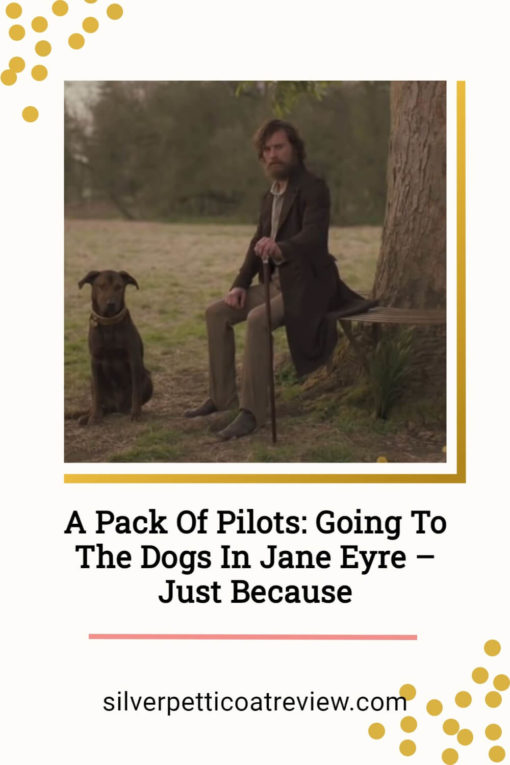 As this horse approached, and as I watched for it to appear through the dusk, I remembered certain of Bessie’s tales, wherein figured a North-of-England spirit called a ‘Gytrash,’ which, in the form of horse, mule, or large dog, haunted solitary ways, and sometimes came upon belated travellers, as this horse was now coming upon me.

It was very near, but not yet in sight; when, in addition to the tramp, tramp, I heard a rush under the hedge, and close down by the hazel stems glided a great dog, whose black and white colour made him a distinct object against the trees. It was exactly one form of Bessie’s Gytrash – a lion-like creature with long hair and a huge head: it passed me, however, quietly enough; not staying to look up, with strange pretercanine eyes, in my face, as I half expected it would.

Ah, Pilot – the animal extension of the Byronically volatile Mr. Rochester of Thornfield Hall. His familiar, as it were. Pilot’s presence plays such a significant role in three rather pivotal points in Charlotte Brontë’s Jane Eyre that I thought it worthwhile to examine his depiction in film.

RELATED: A ROUND-UP OF MR. ROCHESTERS – JUST BECAUSE

It is Pilot, who is the forerunner of his master, the harbinger of the man to come on that misty lane in the fading light. It is the sight of Pilot at Thornfield that hits it home to Jane that the grumpy stranger on the lane is none other than the heretofore unknown master of the house, Mr. Rochester himself.

And it is Pilot who recognizes and greets the returning Jane; Pilot now the eyes of the blind Edward. “Pilot knows me,” says Jane to the wondering Rochester.

So, the Silver Petticoat Review is going to the dogs today. Here it is, a veritable pack of Pilots as depicted onscreen. Just because.

* And just a quick little note, before we go to the dogs. My dog source is my hound-loving father, who has made his best-educated guesses based upon the photos here. Especially when it comes to apparent crossbreeds, it’s hard to know what exactly is “in” the dog.

Yeah, this is my way of saying that there may be some mistakes in our identifications. So, doggonit, do pipe up in the comments if you see a glaring error.

A Pack of Pilots – Just Because

Orson Welles’ barrel-chested Rochester towers over his Jane, as does his harlequin giant of a dog.

Great Danes are German mastiffs known for their enormous size. Descended from boarhounds of ancient times, Great Danes were traditionally bred and trained to hunt wild boars, bears, and deer.

Although impressively powerful and outwardly intimidating animals, Great Danes are often referred to as the world’s largest lapdogs. They’re pretty laid-back dogs, taking it easy, generally getting on well with others, be they two-legged or four-legged. They don’t always seem to know their own strength or size, though.

So, a frolicking, physical-attention-seeking Great Dane is very much a handful or two or three.

Pilot’s a fawn-colored beauty of a Great Dane, looking decidedly younger than his grey-haired master in this Jane Eyre adaptation.

See above for more information on Great Danes.

Irish Wolfhounds are an ancient breed, with suggestions that they were brought to Ireland as early as 7000 BC. As their name suggests, they were bred to hunt wolves and are powerful, intimidating creatures.

They are the largest of the sighthounds. A sighthound or gazehound is a breed of dog that hunts primarily by sight and speed and, among those breeds, can be found the fastest dogs on the planet.

Irish Wolfhounds are individualists, quirky creatures, highly intelligent, and generally easygoing. “Gentle when stroked, fierce when provoked,” is the historical motto for this breed.

So, they’re gentle giants, introverts but fiercely loyal to and protective of their families/masters. If neglected by their families, left alone, they can become depressed and destructive.

Remind you of a certain Brontë Byronic hero?

Except for his black-and-white coloring, this friendly, eager, little mopsy is grossly miscast as the forbidding, fear-inducing, leonine Pilot.

My father was somewhat in doubt as to what cross this Pilot is, but he’s pretty sure that he’s mostly English Springer Spaniel.

English Springer Spaniels are gun dogs, which means they are bred and trained to assist hunters. They flush out fowl from their hiding places, and they retrieve downed birds. “Springer” stems from their hunting role in scaring the birds, springing them into the air, where the sights of a rifle can take aim.

They’re medium-sized, compact dogs, alert, attentive, and companionable. Springer spaniels are quick to learn, eager to please, and willing to obey; they train well. Highly sociable, if left alone too long, they get bored. And boredom leads to mischief.

Our morose, near-tears Rochester gets a guarding protector with this Pilot, the only herd dog in the pack.

Tervurens/Belgian Shepherds, as their name suggests, are herding dogs, bred and trained to corral sheep. These shepherds are highly sensitive to their environments, alert and watchful, making formidable guard dogs. Highly intelligent and super energetic, these are dogs that need activity and structure, that need something to do, a purpose.

RELATED: JANE EYRE (1996): A HANDSOME, BUT CHILLY ADAPTATION OF A BRONTË CLASSIC

They form strong bonds with their families/masters but can be rather nervous and shy around outsiders. So, they are not the world’s most easily sociable dogs, but they are very trainable and obedient. They can be taught, but teaching requires time and devotion. So, Tervurens are often seen as high-maintenance animals.

I suppose having a Byronic hero as a lover is also rather high maintenance.

There was much to criticize in this adaptation of Jane Eyre, but with the casting of Pilot, they hit the nail on the proverbial head. This is the Pilot of Charlotte Brontë’s original description.

RELATED: JANE EYRE (1997): LOATHE IT OR LOVE IT – AN ADAPTATION THAT GROWS ON YOU

Gentle giants, Landseer Newfoundland dogs were traditionally bred and trained for swimming, used by fishermen to tow nets to shore. They’re powerful dogs, hardy, agile, courageous, intelligent, and generous. Landseers are known for their sweet temperaments and devotion to their families/masters.

Playful, patient, and sociable, they are great with kids. Although they can be a bit difficult to train – they are very sensitive to vocal tones – and nothing will keep them from getting wet. They love water.

Disclaimer: I grew up with Scottish Deerhounds, have hugged and cuddled, and loved beyond measure more than a few. So, it is decidedly with a good portion of bias that I say that the best adaptation of Jane Eyre also has the best Pilot. Even though he’s not completely true to the source material, he’s a fine adaptation!

Scottish Deerhounds, like Irish Wolfhounds, are an ancient breed of sighthounds, with roots going long back before we humans started keeping records. As their name suggests, they were bred and trained to hunt deer, to course or pursue deer by sight, running them down. A Scottish Deerhound in full stride is indeed a sight to behold.

Deerhounds – for all their intimidating looks – are incredibly friendly and docile creatures. They love to laze about and are eager to please. And they love to give chase. Getting them to call off the chase can be a bit of a problem sometimes.

Without exercise, they can get a bit destructive and irritable. They thrive with companionship, especially another dog, and are very loyal, longsuffering, and loving.

Wait, did I just describe our dear Jane there?

Labrador Retrievers and Golden Retrievers are two very popular gun dogs, hunting dogs traditionally bred and trained to do as their names suggest and retrieve, retrieve the downed fowl. Goldadors, as the hybrid of these two hunting breeds, carry the same attributes as their parents.

They’re faithful, companionable, fast learners, obedient, intelligent, and are used widely as service dogs. These are dogs that require activity, a purpose, work of some sort, training.

Alert and observant enough to make good watchdogs, goldadors are hopeless guard dogs; they’re too friendly. Their friendliness can border on excitability at times.

Goldadors are people dogs. They thrive on human contact. And in their haste to come in contact with humans, they can sometimes be a bit rambunctious. This can be trained out of them.

So, the standoffish Rochester has the world’s friendliest furball? There must be something there.

Do you have a favorite adaptation of Jane Eyre as well as a favorite Pilot? A favorite dog? Feel free to share your thoughts in the comments.

6 thoughts on “A Pack of Pilots: Going to the Dogs in Jane Eyre – Just Because”