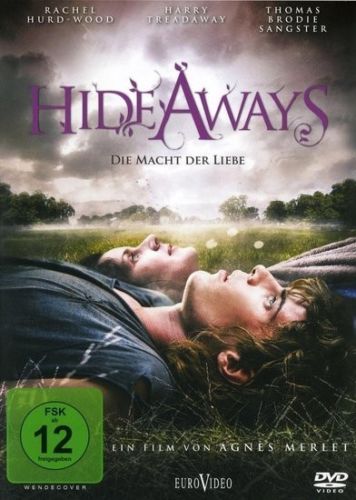 I had to do quite a lot of online legwork to finally get to see this film. I had heard of it through very roundabout channels. The production has limited availability, only out on DVD in Germany and more recently in France. I obtained a German import copy on eBay after searching nearly everywhere else in vain. The film is in English. It is set in Ireland, though the main actors are English. Hideaways is a joint French-Irish production directed by Agnes Merlet. She is known for Artemisia and Dorothy, a historical film based on the famous female painter and a supernatural horror, respectively. Its stars are Rachel Hurd-Wood (Peter Pan, Perfume), Harry Treadaway (City of Ember) and Thomas Brody-Sangster (Love Actually, Nanny McPhee, Game of Thrones).

The story of Hideaways or The Last Son is narrated by Mae who tells it with smooth charm and wry wit. It is about the Furlong family who for three generations have had strange and not particularly useful gifts. The grandfather went blind for 37 minutes every time he thought about sex and the father knocked out electrical items when he was scared. But it is James, the last Furlong son who has the deadliest power. When he is hurt badly he sucks all the life out of the surrounding plants, animals and people. He discovers this in the worst possible way when his power kills his remaining family. He is moved to a reformatory where bullying eventually leads to it happening again. Finally, he runs into the surrounding woods, knowing that he cannot be around people.

Years later we meet Mae West O’Mara, a young girl dying of cancer. Hearing bad news about her latest operation, she decides to run off into the woods where she meets James who has been living in a hut, isolated and barely managing to control his power. And so begins a touching love story that forms the second act of this beautiful little fable. The story is at heart, a fairy tale. This is seen most in the scenes filmed in the forest, mist amongst the trees and hiding away in a woodcutter’s cabin. Also in the way Mae tells the story. It has been compared to something from Myasaki’s oeuvre and I can see the similarities. The simple sweet story and accompanying special effects do have the feel of an animated feature. The effects are good, especially for a low budget film, remaining functional and non-intrusive.

The music is well-suited to the ever-changing mood and tone of the film, fantastical and otherworldly. The film is not without humour, in the narration and James’ attempts to find out whether or not he has a superpower. Which admittedly takes a turn for the worse when he’s thrown from his bike trying to determine if he can fly.

The film’s strength lies in the simple connection and chemistry between its two leads. The writing also is very compelling. The relationships are believable despite springing up within a short period of time. The story keeps a perfect balance between fantasy and reality, never venturing too far into either. The tale is well told and immensely enjoyable. I urge you to see the film if you can.

It is available on ebay…

Our romance-themed entertainment site is on a mission to help you find the best period dramas, romance movies, TV shows, and books. Other topics include Jane Austen, Classic Hollywood, TV Couples, Fairy Tales, Romantic Living, Romanticism, and more. We’re damsels not in distress fighting for the all-new optimistic Romantic Revolution. Join us and subscribe. For more information, see our About, Old-Fashioned Romance 101, Modern Romanticism 101, and Romantic Living 101.
Pin this article to read later! And make sure to follow us on Pinterest.
By Elinor Cackett on January 8th, 2015